#Blogtour #Review - A Scandal in Brooklyn by Lauren Wilkinson 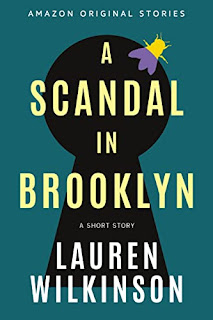 Today, I'm celebrating the release of Lauren Wilkinson's A Scandal in Brooklyn with an interview, an excerpt and a review. There's also a giveaway, to win a $50 Amazon voucher.

Lauren Wilkinson’s debut novel, American Spy, was a Washington Post bestseller; was nominated for the NAACP Image Award, Anthony Award, and Edgar Award; and was included on Barack Obama’s 2019 Recommended Reading List. Her writing has appeared in New York Magazine and the New York Times, among other publications.

Let's start by hearing from Lauren herself...

Your newest story, A Scandal in Brooklyn, is about a complex murder with a plethora of distrustful suspects — a clear homage to classic Holmesian tales. What elements of Arthur Conan Doyle’s original work most inspired you?

Arthur Conan Doyle’s Sherlock Holmes stories and novels are a lot of fun! And it was important to me that this story was fun, so I’d say that was the element of Doyle’s work that most inspired me.  We’ve all had a hard few years, so I didn’t want to write anything that was too heavy.

What made you decide to omit Sherlock from your story and instead focus entirely on Irene Adler? 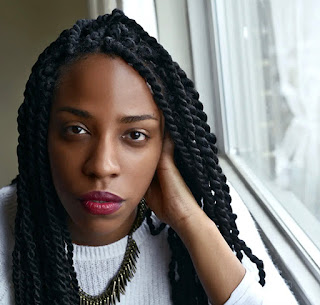 Irene has been interpreted many ways in the last hundred years, but you offer a brand-new take on The Woman by making her a person of color. How does her background and culture change the narrative of this iconic female?

Well, the fact that she’s a Black woman certainly informs her worldview. But for me, re-imagining Irene Adler as a modern character (and putting her in modern circumstances) was the choice that led to the most germane changes in the narrative.

Irene has an eidetic memory which she has learned to use to her advantage – for example, in solving crimes. But this skill can also be a curse. What do memories mean to your characters and what do they mean to you?

Memory is such an interesting thing to me! Our memories are so fallible, and yet a person’s collection of memories is the cornerstone of their identity.  What a strange internal conflict that is, and stranger still that it’s built into our nature.  The Mandela Effect is a good example of how this conflict plays: isn’t it interesting that -- for some people anyway -- it’s more agreeable to believe that objective reality is wrong than that they simply misremembered something?

Tommy Diaz, Irene’s old friend, recounts the story’s events including a murder as well as efforts to solve the crime. Why did you choose to show the story through his eyes?

The character of Tommy Diaz is based on one of my oldest friends, Tommy Pico (who is a poet, screenwriter and now an occasional actor)! Honestly, it was just more fun for me to try to write a story from “his perspective” than from my own. I’m starting to get a little bored with my own perspective, if I’m being totally honest.

How do you think modern technology is changing the mystery genre? What are some positive and negative aspects of these changes?

I think that modern technology has the potential to give the genre new plot devices and twists. But ironically that has always been the case—apparently A Study in Scarlet was the first story to use the magnifying glass in a crime investigation. So, I think the question of how modern technology changes the mystery genre is a good example of how the more things change, the more they stay the same.

In 2019 you released your debut novel American Spy to an avalanche of critical acclaim which included being named on President Obama’s summer reading list. What effect did this experience have on your career?

I continue to be extremely grateful to President Obama for putting my novel on his summer reading list!  The exposure had a profound effect on my career, in the sense that it allowed me to pursue television writing, which is what I spend most of my time on these days.

What’s next for you?

Well, in my personal life, I’ve recently gotten married and we’re renovating our house together, which is an exciting project (that’s also been pretty time-consuming).  And professionally—well I’m not too sure! I’d really like to write another novel one day. I’d also like to keep writing for television, and maybe a movie one day too.

A Scandal in Brooklyn Excerpt
We went inside, and into what looked like a clearing in the woods. It took me a moment to realize that the floor, walls and ceiling were all covered in LED panels that were projecting a three-dimensional image. Victor lay in a patch of grass in one corner of the room beside a tree whose branches stretched outward into the simulated sky. A cloud of bees was buzzing around the hive dangling from one of the branches.
“I . . . can’t breathe. Help me,” Victor said without turning to face us. His voice was ragged.
“Where did those bees come from?” The kid with the buzz cut sounded confused. He had a Russian accent, and couldn’t have been more than twenty-five.
“There are more over there,” Tyler said and pointed to the LED panels on the opposite wall.
“Victor must’ve been stung. But how—”
“He’s allergic to bees,” Priya shouted. “He’ll die!”
“He’s going into anaphylaxis,” Tyler said. “There’s epinephrine in the first aid kit.” He ran out into the hall to retrieve it, and when he returned, he shouted, “Someone call 911!”
I tried to but the call was rerouted. As an automated voice thanked me for contacting Avisa’s private emergency number, I watched Tyler poke a needle into a vial of epinephrine and draw the clear liquid up into it. He plunged the needle into Victor’s thigh.
A woman with a soothing voice came on the line, and after I explained what was going on, she told me she’d send emergency personnel to Avisa House. The alarm stopped suddenly, and I hung up and glanced over at Irene. She was observing everything, doing her best to commit the moment to memory.
I’d assumed that the shot would’ve immediately revived Victor, like in the movies. Instead, his eyes rolled up into his head and his body went limp.
“He passed out,” Priya said. “Do something, please!”
Tyler started CPR. A blonde woman with a magazine tucked underneath her arm came through the open door. My best guess was that this was the chef, Carol. “What the hell is going on? What was that alarm?”
Victor was still unconscious. He must’ve had a serious allergic reaction—his cheeks had ballooned to grotesque proportions, his eyes were swollen shut, and a bright-red rash had broken out on his neck and chin. Tyler stopped pumping his heart and put two fingers to Victor’s wrist to check his pulse. After a moment, he said, “He’s dead. I’m so sorry.”
Priya dropped to her knees beside him. She started to sob. I was too stunned to say anything. We all were. The room was so quiet that I could hear the distant sound of rain drumming on the roof. A couple of EMTs showed up a few minutes later—looking back, I wonder if they really were EMTs. They had both the air of authority and the equipment of medical professionals, but I can’t say for certain.
“I don’t understand this.” Priya had gotten up and was standing with Irene, Shinwell, and me. Her eyes darted back and forth between Irene’s face and Victor’s body as it was loaded onto a gurney. “He was fine just a few minutes ago.”
“Was he stung by digital bees?” I asked in a low voice.
“I think someone wanted it to look that way,” Irene said. “But I don’t buy it.”

I'm grateful for a free advance e-copy of A Scandal in Brooklyn to consider for review. When I saw the description - a short story featuring a modern Irene Adler getting to the roots of a devilish crime in contemporary Brooklyn - I couldn't resist reading it, I love a Holmesian inspired mystery and wanted to see what Wilkinson would do with Adler.

A Scandal in Brooklyn is a short, fast-moving story. Adler is a woman with remarkable memory abilities which she's honed through practice and training ('To Irene, her memory is a physical place that look like her childhood home') and in this story, she teams up with an old friend, Tommy Diaz, to use them to solve a crime involving a tech billionaire. In the best Holmes and Watson style, the story is Diaz's write-up of a notorious case done at Adler's suggestion ('While some of the interest in the Victor Stein mystery has subsided, it's still a popular story in some corners of the Internet...'). It all begins when  Adler recommends him to her friend Priya to help investigate the disappearance of Priya's husband, who has gone missing.

The two quickly find themselves, together with Priya and Irene's sort-of housekeeper Shinwell, in the secret laboratory of said billionaire... who just happens to be Adler's husband... and who just happens to have another mystery he'd like them to solve.

As Adler gets to work, it becomes clear that her talents go much deeper than a killer memory. The case is a tricky one, with one obvious suspect, but also with perplexing clues, several witnesses with their own agendas - and other potential criminals on site. It's not just a matter of who and why, but also of how - a classic Holmesian mystery, and a situation where there may still be danger.

I really enjoyed seeing Adler put through her paces here in something which is far from a pastiche or rewriting of a Holmes story, but rather a tale with a very modern ambience and at the same time, a familiar sense of devilish mystery. Great fun to read, great characters, and Irene Adler - in any incarnation - is of course a must-read. I'm hoping to hear more about this version of her!

Website: https://www.lauren-wilkinson.com/
Instagram: https://www.instagram.com/thrillkinson/
Goodreads: https://www.goodreads.com/author/show/17287509.Lauren_Wilkinson
And you can be in with a chance to win an e-copy of the story and a $50 Amazon voucher at the following address http://www.rafflecopter.com/rafl/display/07c2363f278 (draw operated by the book's publicist with whom I am not connected) 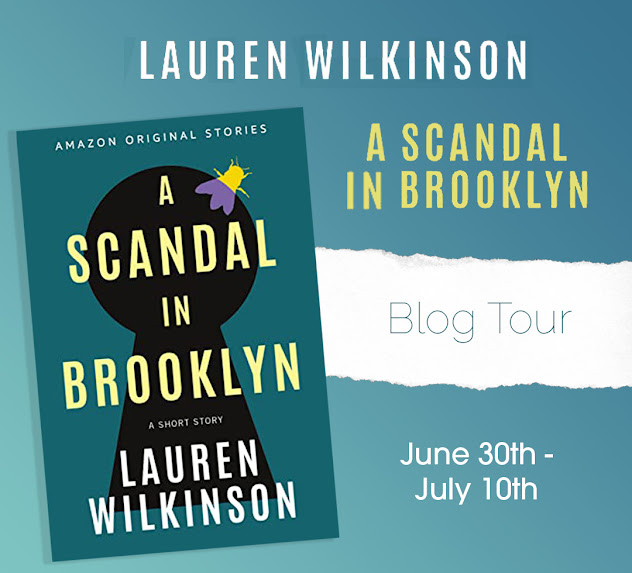