#Blogtour #Review - The Ballad of Perilous Graves by Alex Jennings 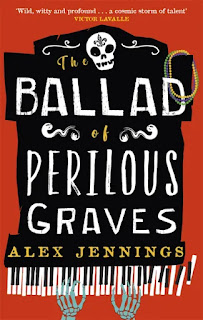 The Ballad of Perilous Graves
Alex Jennings
Orbit, 23 June 2022
Available as: PB, e, audio CD
Source: Advance copy
ISBN(PB): 9780356519241
I'm grateful to Nazia at Orbit for an advance e copy of The Ballad of Perilous Graves to consider for review, and to Tracy at Compulsive Readers for inviting me to take part in the book's blogtour.
The Ballad of Perilous Graves takes us to Nola, a city where the incredible happens every day.
Skycars will carry you around town; you can eat in a bar and diner occupying the remains of a UFO crash-landed in a lake; graffiti tags float through the streets, with hallucinogenic properties should you let then drift through you.
And supernatural guardian spirit of the city, Doctor Professor, may materialise at any time with his piano, the Mess Around, playing music that you just have to dance to.
This is the home of kids Perilous Graves (Perry), his sister Brendoline (Brendy) and their best friend, Peaches. Peaches, who is super strong, lives alone in an abandoned house together with her collection of rescued animals. Peaches (who Perry has a bit of a thing for) doesn't attend school. Perry and Brendy do -  though Perry's recently moved schools, desperate to avoid magical studies that might bring him to the attention of the fearsome Hanging Judge.
We are then in a fantastical world right from the start, as Peaches calls on her friends to assist her in a quest, Perry and Brendy suffer a loss, and Doctor Professor reports the theft of nine songs that keep Nola in order. Their actions will the shape the future of the city, bringing them up against the spirit of the Storm that perpetually threatens Nola. Also involved with this will be Casey, a young trans man who's investigating the disappearance of his cousin, Jaylon. Casey's presence in the story makes this much more than a tale of some kids having a magical adventure - his history and life make events here seem very current and his reflections on his identity mesh with the complex nature of the city itself, which in some respects is divided, as well as being menaced by that external threat, the Storm
I need to be careful about spoilers here, because there are aspects of the story which it deliberately does NOT spell out and referring to them too clearly would take away some of those "aha" moments when you spot what's going on. So I won't say exactly how Casey, and Jaylon's, involvement relates to Perry, Peaches and Brendy's story. You need to unpick this for yourself, as the timeframe and location move back and forward, the flashbacks filling in, especially, Casey's background - and finally leading up to a realisation that made me go back and re-read some parts of the book. Casey's identity is key here and his story - and its evolution - is I think a reflection in one person of points Jennings is trying to convey about Nola/ New Orleans more widely.
(And sorry if that reads as an entry for Pseud's Corner. Just read the book!)
In short, what we have here is an exciting fantasy adventure, as Peaches, Perry and Brendy confront one threat after another, including gangsters made into songs, songs that come to life, the increasingly unstable nature of the city, and the dawning realisation that the adults around them don't have all the answers and indeed may themselves simply be kids putting on a good act. Even the revered Doctor Professor himself may let them down, and no-one is guaranteed a happy ending - as Perry and Brenda's mum realises when she knows how much danger they are getting into. (Rereading this review, I spotted that my autocorrect turned that into "how much dance they are getting into" - which would actually have worked just as well for this book, I think!)
At the same time, we're exploring Casey's life and history - and the remarkable city of Nola/ New Orleans, which is so powerfully realised (and, I'd say, so loved, with all its faults) that it more or less steps up and performs as another character here. The heart of the story is very much rooted in actual history and in actual places and their relationships. Jennings has such a capacity for writing, for language and dialogue, and creates such a vivid, atmospheric and, well, accelerating, narrative, that the story just draws in the reader. Yes, especially at the start he throws a lot at you, he glories in the Nola dialect, which will not be familiar to all, and there are those things which only emerge slowly.  But if you feel overwhelmed, just go with it. As the pace picks up, things begin to knit together and it all makes sense (even all those characters who have lost one eye, as though Odin walked amongst us...)
For more information about The Ballad of Perilous Graves, see the Orbit website here. And do read the other stops on the tours - see the poster below for details!
You can buy The Ballad of Perilous Graves from your local bookshop, or get it online from Bookshop UK, Hive Books, Blackwells, Foyle's, WH Smith, Waterstones or Amazon 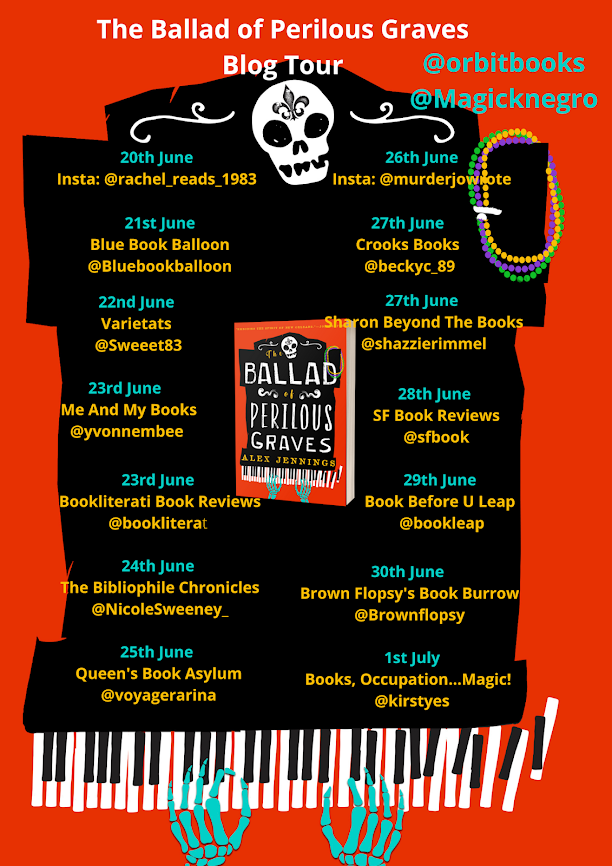