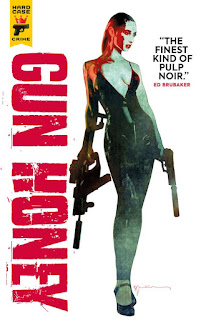 Gun Honey
Charles Ardai (writer), Ang Hor Kheng (artist) and Asifur Rahman (colourist)
Hard case Crime (Titan Comics),  3 May 2022
Available as: PB, 112pp
Source: Review copy
ISBN: 9781782763468
I'm grateful to Titan Comics for a copy of Gun Honey to consider for review.
This volume collects issues 1-4 of a comic following the adventures of Joanna Tan, the arms dealer and smuggler to whom the title refers.
The story occupies a murky territory between espionage, thriller and crime: Tan is actively supplying weapons for nefarious purposes (whether or not she has any scruples about what she does is one of the central questions here - one which for me wasn't, quite, answered in this volume). That brings her into touch with criminal gangs, terrorists and corrupt politicians and indeed these blend into one another in a manner familiar in pulp.
As was the central premise here - when a law enforcement agency reaches out for help, it seems to be making an offer Joanna can't refuse. So the story gets darker, moving from the daring set up of the opening pages, where she poses on a beach to catch the eye of a tycoon as part of a job, to an attempted infiltration of a crime syndicate.
Through all this we're introduced to Joanna's past, and (perhaps) to the events which still motivate her now. It seems the world she's moving in now isn't so far from where she grew up, and she has motives which may mean that consequences and ethics take second place.
Or she may not. As I said, there is an atmosphere of amorality here which feels as though it fits a world of super yachts, remote island dens of pleasure and general lawlessness.
This uncertainty, and the twists and turns of the plot, keep the story readable throughout and the atmospheric drawings - using both a clear realist style a degree of grainy murk - contribute to that, especially when capturing the seedier locations and events. In relation to the latter, I would warn that there are some very explicit scenes here - both of killings, and also of Tan, as she picks her way through an exploitative, male-dominated world (or at least, it was till she took a stand).
Further episodes of Gun Honey are promised, so if you missed the originals, this would be a good place to catch up on the story so far.
For more information about Gun Honey, see the Titan Comics website here.