#Review - The Knave of Secrets by Alex Livingston 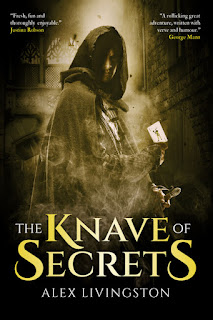 The Knave of Secrets
Alex Livingston
Rebellion, 7 June 2022 (UK), 9 June (US)
Available as: HB, 400pp, audio, e
Source: Advance copy
ISBN(HB): 9781786186072
I'm grateful to Rebellion for an advance copy of The Knave of Secrets to consider for review.
This book simply wowed me from its opening - in which cardsharp Valen Quinol and his crew cozen a rather nasty aristocrat who tried to turn the tables on them through sneaky tricks - to its dramatic, world-shaking ending, by way of compulsive world building, bitterly sharp social commentary and a determination on the author's part not to let the mysterious sect of magicians we see here be the secret hand that rules everything.
There are perhaps many ways to crystallise and make real a fantasy world. It's commonly done through warfare - actual or threatened - religion, or, of course, magic. While these factors are certainly present or threatened, much more important to Livingston's island of Valtiffe and to its surrounding lands though is something else.
Gambling. 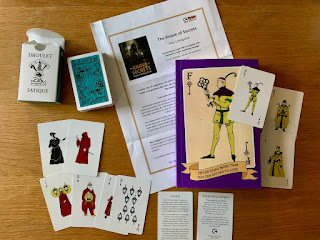 The rich culture of these nations and territories - caught up as they are in a kind of old Mitteleuropa struggle of divided loyalties, languages and origins - is drawn in the games played at table in casino, club and tavern. Or aboard ship, on the dockside, or in back alleys. The book is saturated in accounts of epic card duels, descriptions of the different games, the ways of cheating at them, the different suits of cards, varieties of dice, of boardgames, tactics and of the danger of sharp play. The sources quoted use their accounts of gaming to illustrate or allegorise everything from decent conduct in Society by a "gente" to politics to history to the cultural traits of the various nations and peoplkes that play a part in the story. The maps which are included label each city and town according to the games that are popular there, and - I was delighted to see - the review copy even came with a set of cards and rules (see picture).
It's a cultural milieu in which Valen and his friends Ten(eriève) and Jay, and his wife Margo, are perfectly at home. This group of cheats and sharps are so perfectly well described and realised - Valen and Ten who were turned out of wizard school, Margo the daughter of stolidly middling merchants who despise her raffish husband, Jaq the sailor. Their lives take place not in the stone halls and snowy fells of stereotypical fantasy but in a sort of bourgeois, trading-and-politicking world redolent of ancien regime Europe, though with added magic.
Because this is a fantasy, make no mistake. Valen's first vocation was to magic, from which he was exiled due to something almost like theological differences. Valen wants to develop it to serve him at the gaming table, though he's having little success - but the magic here is always channeled, limited and definitely in the service of distant, vaguely glimpsed political games.
All of this - gaming, magic, politics, spying and more - comes together when Valen receives Ann offer he can't refuse from one of the local mobsters, the chief of the Naughty Knaves: play in the Forbearance Game, the biggest, most notorious, contest in the city, or - well, as I said, there isn't really an alternative.  Not one he'd like, for Margo, or for his friends. Thus unfolds a definite Caper subplot, which is great fun.  Of course that leads to Trouble, to being pursued by all sides, desperately trying to work out what precisely is going on, before the sky falls in and Valen's comfortable, safe life spirals right out of control.
Livingston gleefully adds to the mixture obscure spymasters and double agents, a cool, aristocratic lady called Ria who may be playing both ends against the middle and a vengeful, deadly force of unknown origin.
It's gloriously readable, whether you enjoy card games or not, a book to savour, not to rush through (so you may have to read not twice - once at a gallop, then more slowly) and one where our heroes may be threatened but the stakes for the world or indeed the universe are pleasingly low.
Until they're not.
Great fun, and I hope I'll be invited to this table again soon...
For more information about The Knave of Secrets, see the Rebellion website here.