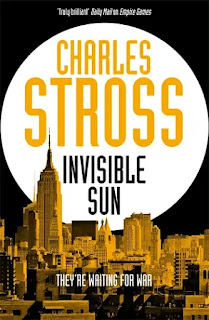 I'm grateful for an advance copy of Invisible Sun to consider for review.

Invisible Sun sees Stross's multiple timeline story of politics, economics and development reach a potential conclusion, and also reach six books by the New Reckoning or nine Old Style (the first six, the Merchant Princes arc, were revised into three satisfyingly chunky volumes). In the course of its unfolding, the story has mutated from portal fantasy to SF, with a distinct technothrillery edge.

In Merchant Princes, Miriam Beckstein, who thought she was an ordinary young woman from Boston, struggled to come to terms with the reality that she was a world-walker able to cross between timelines, and a member of an other-Earthly aristocracy from a medieval kingdom. In the course of that narrative arc, Stross explored ideas about development, the functioning of states, the corruption of democracy and the interplay between family and the wider world - Miriam's cousins in the Clan, world-walking smugglers who put their abilities to good using trafficking special cargoes under the noses of officialdom, being great fans of Family.

Eventually Miriam took refuge in a nuclear-armed, revolutionary-democratic state, the New American Commonwealth, which occupies the American continent in another timeline. And so, in this last (at least for now) instalment, we see the Commonwealth squaring up to a paranoid security-state US. Paranoid, because it was attached with nukes by the Clan,  who have now fled to the Commonwealth. It's a complex, game-theory driven situation, a para-time Cold War liable to go hot at any moment even before throwing in revolutionary ultras, a runaway Princess and independent-minded intelligence operatives who don't always think to clear their ploys though the chain of commend.

Elsewhere, though, a much worse threat to the future of the Earths (all of them) has awoken (giving Stross the opportunity to use 'Crisis on Infinite Earths' as a chapter title).

The title of the present book, Invisible Sun, picks up the "family" theme, viewing the effect on great events of family and personal connections as being like that of a great, gravitational mass moving through a solar system, warping space around it and producing unforeseen disturbances in the heavens at odds with the expected orderly progression. Notoriously, there's no exact mathematical solution to the dynamics of such a system (the famous many-body problem). So we see here the existence of not only the Clan, but another hidden family, one made rather than born, driving events in this book. (And in the author's Afterword we see the same theme occur again in real life as he explains why this book took longer to reach your hands than you might have expected).

I really, REALLY enjoyed seeing that second family, the Wolf Orchestra, in action. An old-style East German spy ring composed of sleeper agents in the US, they are now stranded with no home to return to, nobody to broker prisoner swaps with or offer diplomatic cover. But they are tuning up to play one last symphony, pitting their classical spycraft, their dead-letter drops and lamplighters, but more, their discipline and their loyalty to one another, against a modern panopticon state armed with endless cameras, massive compute resources and virtual hegemony in the West.

Virtual, not quite total. An entertaining subplot here features a Berlin police officer who insists on following the rules to the letter while his gang-ho DHS opposites stew in frustration. Also, those EU data protection rules which prevent the raw take from the exported to the US for processing.

I also enjoyed seeing the imaginative creation that Stross has made of the Commonwealth, not a perfect place by any means (indeed in some respects a rather deadly one) but an attempt, perhaps, at a sketch of a better nation. It's one that reminds the members of the Orchestra, in atmosphere if not in specifics, of their vanished home, but also allows them to see a perhaps more perfect version of that. Their status also leads to some moments of genuine, if grim, humour; 'It's not kidnapping: they asked us for political asylum... They're not doing so as American citizens but as citizens of the German Democratic Republic. If you don't like it, you can take it up with Erich Honecker's ghost.'

This book is, as I've come to expect from Stross, slick, thought-provoking but above all, fun with rapid-fire deployment concepts from science, engineering, espionage, defence, politics (of all sorts: within families, within organisations, between arms of a State, between nations, between timelines, you name it) and much, much more. (I loved JUGGERNAUT). Want to see how a princess from an ancien regime, Diving Right of Kings monarchy might behave when she escapes into 21st century Berlin? Look no further. How about a perspective on the accelerating defence technology of a rapidly industrialising revolutionary polity with paratime espionage capability? Here it is. Would you like to to know how that paratime capability might have come into being, and what it means? It's here.

Yes, in this book, we finally see the veil lifted on the origin of the Clan's ability, and how it fits with that other threat, the one that the US and the Commonwealth have been ignoring as they manoeuvre and jostle for advantage. It could be that is a BIG mistake as the book pivots fully into apocalyptic SF...

I would STRONGLY recommend Invisible Sun. It brings epic closure to the Empire Games arc, revisiting many much-loved characters as well as exalting in the doings of new ones such as Rita Douglas and Liz Hanover who are both EXCELLENT and should get more coverage SOON.

I could also swear I saw hooks for followups, despite Stross's protestations about this in the Afterword. Maybe once he's got over writing something longer than War and Peace, he might change his mind?