#Blogtour #Review - Born to the Dark by Ramsey Campbell 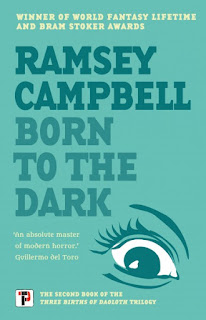 Born to the Dark (The Three Deaths of Daoloth, 2)
Ramsey Campbell
Flame Tree Press, 13 August 2021
Available as: HB, 288pp, PB, e
Source: Advance copy
ISBN(HB): 9781787585638
I'm grateful to the publisher for an advance copy of Born to the Dark and to Anne Cater of Random Things Tours for inviting me to take part in the book's blogtour.
The second part of Campbell's Lovecraftian trilogy The Three Deaths of Daoloth (after The Searching Dead) takes us to 1980s Liverpool, a city in the midst of political turmoil and confrontation with the London government. But film studies lecturer Dominic Sheldrake is involved in a more personal struggle, as shadows from the past seem to be reaching out for his adored son, Toby. In a story that very much continues from the earlier book, Campbell injects a sense of unease from the off: returning from a meet-up with old friends in London, Sheldrake seems inordinately concerned over a dropped phone call and the fact that, when he rushes into the house, he can't immediately find the boy. We might wonder why.
It's only partially explained when we learn about the seizures and sleep problems that have afflicted the boy since childhood - there does still seem to be a vein of over-protectiveness in Sheldrake who's suspicious even of the treatment that his wife Lesley seems, after endless medical consultations, to have found. That seeds an unease between the parents, something that will only grow as Sheldrake delves into his own history and begins to see echoes of events that he experienced in his childhood, events involving a sinister cult.
I adore Campbell's finely-crafted horror, which relies less on shock and gore than on cultivating a nagging unease as his protagonists explore their, often urban, landscapes. Born to the Dark is a fine example, exploiting the unsaid, the misunderstandnings, the awkward frictions in daily conversations to suggest that all may not be well. Without at all needing to invoke the uncanny, almost all the interactions here are difficult, cross-purposed and, ultimately, lacking in a full sense of communication. Sometimes Sheldrake shares in this view, pointing out things that were missed or sidelines, sometimes we're left to draw our own conclusions. Staying on top of life is, Campbell shows us, hard work, with a constant risk of going off the rails (or even falling off the ferry, given Liverpool's geography).
That's pressed home by the conflict in all areas of Sheldrake's life - the increasingly acrimonious exchanges with Lesley are matched by interventions from the irritating figure of the university vice-chancellor, Dominic's boss, who's hyper-sensitive to complaints from the students about the content of his film-studies course.  The root of the trouble seems to be the response of religious members of the class to Dominic's instinctive scepticism, which is ironic given his past encounters with the occult might give him grounds for belief in something, if not anything orthodox. But it does mean he is continually harassed and nagged, in a context where he might otherwise have some respite from the difficulties in his marriage. Instead, we see a portrayal of a man pushed from all directions, increasingly believing that he and his family are being targeted by unseen forces but - in trying to explain his fears - only making himself seem obsessed or even deranged.
It's all done very slowly and gradually and, in having an innocent boy at its centre, one for whom there seems no help, seems deeply, deeply sinister - an impression only magnified by a somewhat comic pair of policemen (if they really are) who take to harassing Dominic. They present as both funny and deeply creepy, suggesting that the forces at work here are active not just in dark backstreets and remote isolated mansions but in brightly lit corridors and streets of the city. Indeed, the rough ride that Dominic gets from officialdom in general backs that up and suggests a connection between him and his city, both estranged from the powers and principalities that given them.
All in all, a disturbing and suggestive read, one that achieves its effects by hinting at a taint in everyday life rather than through setpiece supernatural theatrics, and is all the more effective for that.
I'd recommend.
For more information about Born to the Dark, see the Flame Tree Press website here, and also the other stops on the blogtour - listed in the poster below.
You can buy Born to the Dark from your local bookshop, or online from Bookshop dot org UK, Hive Books, Blackwell's, Foyles, WH Smith, Waterstones or Amazon.