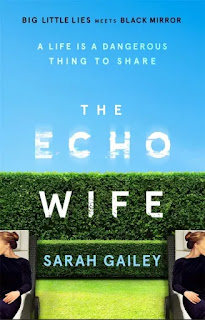 I listened to The Echo Wife as audio, completing it in the e-book as I got close to the end. Audio is the ideal medium for Evelyn's spiky, defensive story, Xe Sands' narration conveying the whole range of emotions from anger - so much anger! - to betrayal to grudging sympathy. The narration really takes flight to imply a whole world of unspoken truths festering just under the surface as Evelyn and the others here ignore awkward facts, look the other way, fail to understand things on purpose, and generally evade their way through the moral complexities of this twisty story.

Evelyn is a research scientist, a pioneer in the field of human cloning and especially, of "conditioning" the "specimens" to resemble - and act like - their originals. Gailey's writing is simply astonishing here, employing understatement and na clinical, precise register to show Evelyn and her co-workers apparently happy to accept all this entails: The creation of life.  Its manipulation. Its destruction when it doesn't come up to scratch, or when no longer required. A world of horror and suffering defined away in clipped, clinical language and then tidied away quickly. Evelyn doesn't need to think through the implications because these are simply not humans, are they? They are "specimens".

This isn't the only way in which Evelyn has learned to master her emotions. From her childhood, where she and her mother are at the mercy of a controlling and (it's implied, but never stated overtly) abusive father to her life with husband Nathan (the story opens just after their divorce) there is just so much not said. So much so that the silence, the passivity, actually gets quite LOUD, quite VIOLENT. Evelyn's determined not to be her father, afraid (though she won't admit it) that she will be. After all, wasn't she moulded by him (as she moulds her specimens?)

Questions recur. What makes us, us? What makes us, human? Answers are demanded as Evelyn is forced, after a catastrophe in her life, to cooperate with Martine, Nathan's new partner. Martine is all that Evelyn isn't.

Yet she's also, inescapably, a version of Evelyn, Nathan's idealisation of her. Again, what makes us, us? WHO makes us, us?

Forced, for the sake of survival, to work together, the two women orbit one another, acting as two foci in a dialogue about freewill, humanity, selfhood. All of Evelyn's painfully acquired certainties will be challenged by Martine's sheer existence, her life an argument for other ways of seeing, other ways of being. It's a very claustrophobic piece. Evelyn and Martine - these two women, so different, so similar - endlessly fascinated me as they learned about each other and so, about life.

There are many bumps along the way. This is a world close to ours. It has Evelyn's marvellous cloning tech, but that's the only difference: women's existence, their participation, is still visibly on sufferance. (Evelyn knows she has to be better than any man, and resents manbaby Nathan, sloppy Nathan who never pays attention to his work and yet gets away with it.) There is the doctor who doesn't ask questions when a young girl is brought in with a broken wrist. There is the sense that, as Evelyn sees it, it's her, as a woman, who has the responsibility of organising everything for Nathan, of making plans and making things work - and then he goes and sulks because she burnt the eggs!

For Evelyn, everything is about her legacy, her need to excel. We might wonder who, in her past, she is trying to impress? And just how far she will go, what she has to achieve, to do that? And who might get hurt?

There is just so much here, whether you see this as a classic SF novel - Evelyn an even more modern Prometheus, perhaps - as a study of living, of becoming, as a grim account of dominance and abuse or, possibly, as half a dozen other things. It is absorbing, accomplished, very sad in places and, in all, a terrific read.

For more information about The Echo Wife, see the publisher's website here.