I'm grateful to Jo Fletcher Books for an advance copy of Certain Dark Things to consider for review, and for inviting me to take place in the Social Media Blast accompanying publication.

Offering a truly original take on the vampire myth, Moreno-Garcia's republished novel Certain Dark Things imagines a world where the existence of vampires became known in the 1960s, leading different countries and cities to take different attitudes to them. Spain and Portugal were hostile, creating a wave of vampire emigration to more tolerant Mexico - however, Mexico City has been declared "vampire free' making existence there difficult for them. Moreover, in this world there are a variety of vampire subspecies, the native Mexican one being rather different form these European variants. In the resulting chaos and conflict, vampire politics and custom therefore plays a big part and makes it harder for All, fleeing the murder of her family, to find safety from her enemies.

Atl is as different as you can imagine from the traditional European aristocrat in a cloak with a castle in the mountains. Her ancestors were priestesses of the war goddess, fallen on harder times since the coming of colonialism but rising somewhat in fortune on the back of the drugs trade - until the arrival, again, of more ruthless Godoy vampire clan from Europe. But there's more to it than that. All is a spoiled younger daughter, not destined to lead her family and caught up in what is basically a gang war without the experience or, you might think, the common sense to survive. But she has two things on her side: a fierce desire for revenge, and Cualli, her fearless dog.

She has something else, as well, though it is not always welcome: the fascination, and growing devotion, of a human boy, Domingo, a homeless garbage-collector who lives in the tunnels under the city and dreams of the world he seems in his comic books. Of course this includes vampires, stories about which are popular in this world as in ours, and just as sensationalist. Perhaps Domingo's interest is initially piqued by curiosity, but he quickly becomes fascinated by Atl and by the dangerous world she inhabits, offering her what help he can. But he's no match for arrogant young Nick Godoy, or even for the human thugs who attend him. It seems a very uneven match, even before experienced vampire-hunting policewoman Ana takes an interest in the exponentially rising body-count on her doorstep.

All of this makes for an exciting, pacey and absorbing story taking place among the pulsing night clubs and neon-lit streets of modern Mexico City. Moreno-Garcia takes aim at some hoary myths about vampires while deftly constructing her own counter-mythology, taking account both of the colonial background of Mexico and of vampire tales and stories from other parts of the world. It is above all intelligent and believable, if you're willing to accept the premise of vampires, making the personal dilemmas of Atl and Domingo that much truer and sharper.

Atl could consume Domingo. She needs to do so. She has killed before. So what is holding her back?

Domingo should run, putting as much space between him and Atl as he can. Why won't he?

Yes, there is a thread of romance here but it's complicated, illicit, taboo in vampire society. But Atl doesn't have much of that left. her family has been destroyed and Mexico City is pretty empty of allies. So she's pushed back on her own resources, needing to work out for herself what is right, what is necessary, both to survive and to be able to live with herself. It's no easier for Domingo, a resourceful young man who has already survived in a harsh world but is also in many respects näive and sheltered.

Best of all (for the reader, not for Atl and Domingo) time is very short with enemies closing in and few places to hide. So whatever Atl and Domingo are going to do, they'd better do it quickly...

As a read, Certain Dark Things is exciting, tender, complex and always fun. I'd strongly recommend.

For more information about Certain Dark Things, see the publisher's website here - and remember to visit the participants in the Social Media Blast listed on the poster below. You can buy Certain Dark Things from your local bookshop or online from Bookshop dot org UK, Hive Books, Blackwell's, Foyles, WH Smith, Waterstones or Amazon. 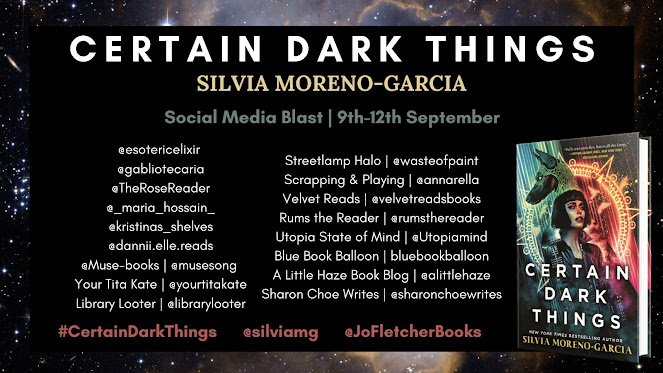