Dark Things I Adore
Katie Lattari
Titan Books, 14 September 2021
Available as:PB, 466pp, e
Source: Advance PB copy
ISBN(PB): 9781789095906
I'm grateful to the publisher for a free advance copy of Dark Things I Adore and for inviting me to take part in the blogtour.
Dark Things I Adore takes us to a remote colony for artists, set among the deep woods of Maine, in 1988. Here a group of misfits gather, isolated from the world, and are given nicknames, distancing them from their everyday lives: Zephyr. Moss. Juniper... Names reflecting the Nature within which they will live, painting, sculpting, shaping clay. Walking in the woods. Boating on the lake. Making love. Making art.
It may sound idyllic - but this is also where a terrible event will tale place, an event that has echoes into the future. Some will return to their lives with a new purpose, with new art. Others seem to end up gathered in to Lupine Valley, and stay for months or years.
Told in two timelines - the story from 1988, and another visit to Maine, in October 2018 - this enigmatic, beautiful book challenges us to spot connections - who is who, and what are they trying to forget? It's interspersed with descriptions of an artist's show, the "Dark Things" of the title. Paintings layered with notes on scraps of paper, receipts, pages from notebooks, all found in and around the same house and telling a despairing and sad story. Reported in meticulous detail, these items form a commentary on both the simultaneous timelines, offering clues about the central character, a woman called Cindy and also - in the colony - Coral.
Coral is a troubled and troubling young woman, whose difficulties seem to have everyone - her boyfriend, her family, the artists in the camp - at their wits' end. She is both at the centre of the book, with her thoughts, actions and feelings the focus of all that goes on, and also reported indirectly to us - and also curiously absent, often interpreted to us especially by Juniper, who narrates her story in 1988, but also by Moss and Mantis whose interest in her was rather troubling to me. Their relationship - especially Moss's, as a painter who adopts Coral as his muse - seemed to be saying really dark things about the potential in art to exploit a subject. Moss has some of the aspect of a vampire, his art gaining in depth and quality as Coral loses herself and becomes more desperate.
So there are more dark things here than just the paintings being prepared for show. A heady brew of love, obsession, revenge, exploitation that approaches abuse, and despair, and with - at least in the imagination of its characters - a brush with the supernatural - Dark Things I Adore exhibits the dangers and pitfalls of high Romanticism in a story that really, really gets inside your head and feels as though nothing good can come of the events being described.
I should perhaps say, of course "Years ago X happened, now those who took part have to live with the consequences" is not a new concept, but any doubts I had were swept away by Lattari's bewitching prose and crisp characterisations, as well as by her telling of these events through the lens of art, all of which make this such an absorbing read, and one I'd strongly recommend.
For more information about Dark Things I Adore, see the Titan Books website here or any of the stops on the tour listed on the poster. You can buy Dark Things I Adore from your local bookshop, or online form Bookshop dot org UK, Hive Books, or Blackwell's, Foyles, WH Smith, Waterstones or Amazon. 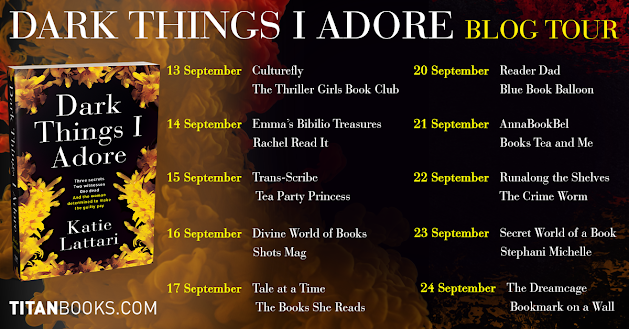