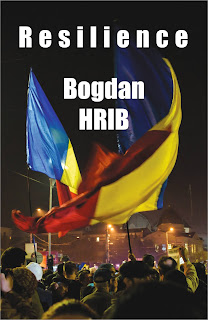 I'm grateful to the publisher for inviting me to join the blogtour for Resilience.

If - in this year of all years - you've missed out on some international travel, let Resilience fill that gap in your life, hopping as it does across Europe from the beaches of South Shields, where it opens with a death, to the streets of Bucharest and Iasi in Romania and back again to London. More than travel, though, the action in this slickly plotted thriller is driven by distance, by geography and by history, plugging into the complex history of Middle Europe with its evolving borders, nationalisms and polities.

Stelian Munteanu is an investigator, a fixer of sorts, also an editor - a man, as the book describes him, with his fingers in many pies. He's hired, after that early death, to look into things. Travelling from Bucharest to Newcastle, he's able to cast an outsider's eye on Britain - but will it be able to penetrate the web of mystery and conspiracy that we're confronted with here? I enjoyed meeting Stelian - the book makes it clear that this isn't his first adventure and indeed, I see that the book is part of a series, but it wears that lightly: there is a sense of backstory, of the characters here having met and been through things before (particularly Stelian's wife, Sofia Matei, whose occupation and dealings are kept a bit mysterious).

Further deaths ensue in the story, both in Britain and back in Romania, and Hrib shows us glimpses of a conspiracy that may or may not be responsible for them. It's part of the fun of this well-constructed and pacey story that we see parts of what they're doing and can sort-of guess and what they want, but at the same time, not everything seems to fit. There are plots within plots, and some of the characters seem to know altogether too much about what's happening. I just didn't know who to trust - even now, I'm not sure. That, to me, is a sign of a convincing thriller.

Behind that, the book read to me as having deep roots in the history and politics of Central Europe. There are the grand plans - the dreams of unifying modern states to create something crossing the continent, echoing the empires of the past and, perhaps, bringing back greatness. There are also nightmares, fears of what dislocation and chaos might follow. All of that's seen through the lens of modern "influencing" - of fake news, astroturfed activism and mysterious figures dispensing large denomination Euro notes. All thrilling, but Hrib never takes the story beyond the plausible and that sense of a history, a previous life, to his main group - not only Stelian and Sofia but Anton, Stelian's policeman friend and his brilliant assistant, Anabella, and Ionescu the spy who comes and goes like Gandalf in The Hobbit. Hearing them speak (and argue and make up) it almost feels like walking into a room where a group of friends are already deeply engaged in a conversation - except that rather than falling silent, Hrib's writing, combined with Marina Sofia's readable, evocative translation, invite you get a drink, take a seat, and listen along.

Overall a fun read introducing characters I'd like to meet again.

For more information about Resilience, see the publisher's website here. And do take a look at the other stops on the blogtour, listed on the poster below.

Bogdan Hrib was born in Bucharest, Romania in 1966.

Former journalist, civil engineer by education and now professor at the University in Bucharest, Hrib is the co-founder of Tritonic Books (1993) and has been instrumental in bringing other Romanian crime writers into English publication.

He was the vice-president of the Romanian Crime Writers Club (2010-2012), and the director/organizer of the International Mystery & Thriller Festival in Râșnov (2011-2015), as well as the PR coordinator of the History Film Festival also in Râșnov

He is the author of the crime fiction series featuring Stelian Munteanu, a book-editor with a sideline doing international police work. Kill the General (2011), the fourth book in the Munteanu series was Hrib’s first novel translated into English, won the Special Award of the Bucharest Writers Association (2012). The Greek Connection is Hrib’s second novel translated into English.

Marina Sofia was born in Romania but has lived in the UK for half of her life. She was a reviewer for Crime Fiction Lover for more than seven years and has also worked for Asymptote Literary Journal. Her previous translation for Corylus Books was Sword by Bogdan Teodorescu. She is on Twitter and https://twitter.com/MarinaSofia8 and blogs at https://findingtimetowrite.wordpress.com/ 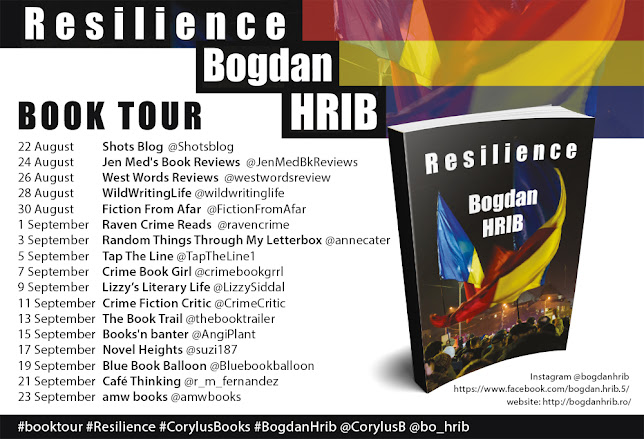