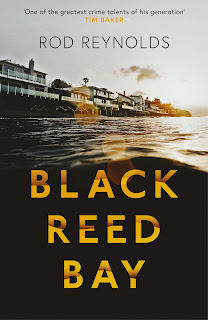 Black Reed Bay (Detective Casey Wray, 1)
Rod Reynolds
Orenda Books, 1 September 2021
Available as: PB, 367pp, e
ISBN(PB): 9781913193676
Source: Advance copy
I'm grateful to Orenda Books for an advance copy of Black Reed Bay to consider for review and to Anne Cater of Random Things Tours for inviting me to take part in the book's blogtour which begins today, 1 September.
In Black Reed Bay, Rod Reynolds delivers a tricksy, atmospheric dark crime drama focusing on cop Casey Wray, a detective sergeant who - while the Job does eat her up - isn't the beached, desperate  stereotype of much detective fiction. Casey loves her work, is good at it, honest, hard working and seen as something of a star - having come into a sexist and backwards department, risen, reshaped the world around her and moved things forward.
Wray is a likeable and sympathetic central character. Her personality and attitude are conveyed in her thorough and determined attitude to a tricky case, that of missing Tina Grace. Tina called 911 late one night from swanky Ramona Beach, an enclave on one of the coastal barrier islands in New York State. She subsequently disappeared. Concern over Tina's whereabouts mounts when her cellphone goes dark and local residents' accounts of what they saw and heard that night contradict. In response, Casey gets stuck in, chasing down every lead, pressing for more resources and gradually - very gradually - unpeeling a disturbing backstory to Tina's, suggesting she may have been walking a dangerous path.
Oh, and Casey finds bodies. Lots of bodies.
I loved this book. The backchat between Casey and her partner Cullen is sharp, flitting between work and salacious gossip, their partnership complex and trusting. Casey's relationship with Lt Carletti, who's something of a mentor to her, is also complex - one senses something more could come of it but neither is making a move yet. And the atmosphere is thick, whether we're the spiteful, eerie marshlands separating the islands from the main, the isolated mansions of the self-regarding wealthy or the down-at-heel, hollowed out suburbs where the less fortunate live.
As is traditional in a police thriller, Casey is a guide, a sort of Virgil leading us through the various levels of this Inferno and interpreting it to us - her reactions showing us who is to be pitied, who to be trusted, who we should be wary of. (She doesn't always get it right). But perhaps that's not quite right because, at the same time, she's more than a guide, she's a player in a game whose rules we don't quite understand. It seems that, whatever happened to Tina, it wasn't isolated, it's part of a wider pattern and one that seems to be drawing Casey in.
Black Reed Bay is, as I'd expect from Rod Reynolds, a complex, satisfying mystery with enough twists and turns to keep the reader guessing - but not so many as to be gratuitous. Most of all, by the time a shocking turnaround happens, we know everybody involved well enough to feel the force of events. What goes on here seem real, and I cared about it, and those caught up in it. Casey has some dark moments, especially in the final part of the book, and by then we understand just what they mean to her and what they have taken out of her.
Recommended for crime and thriller fans, those who just love a good read, and anyone caught up in Reynolds' previous books, especially Blood Red City.
For more about Black Reed Bay, see the Orenda Books website here - and also the stops on the blogtour, all listed on the poster below. You can buy Black Reed Bay from your local bookshop, or order online from Bookshop dot com UK, from Hive Books, Blackwell's, Foyles, WH Smith, Waterstones or Amazon. 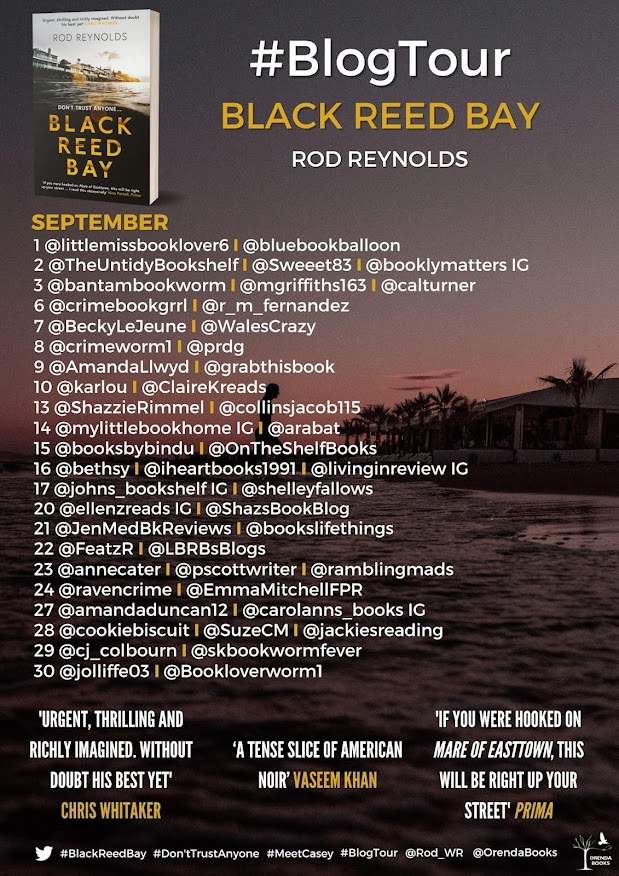