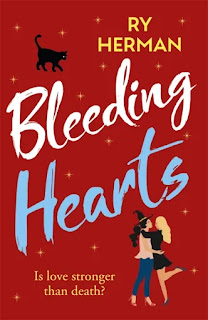 I'm grateful to Jo Fletcher books for an advance copy of Bleeding Hearts and for inviting me to take part in the social media blast.

It was great to return to Ry Herman's Boston and to meet Angela and Chloë, introduced in Love Bites, again. Angela, you may recall, is a vampire, and Chloë a witch, and they are deeply in love. But there is a problem - Angela is desperately afraid that she will take too much from Chloë and she has allowed a year for them to find a way for Chloë not to end up undead. Or even, dead. Now there are only two months left before some hard facts need to be faced...

I love the way that, in these two books, Herman centres the love between two supernaturally blessed (or cursed?) young women and the ups and downs of their relationship. Angela's belief, in particular, that there may be no way for her safely to feed from Chloë threatens to break them up. Without Chloë, Angela would be faced by a choice between starving, and going back to picking up strangers in bars and clubs to feed from. Issues of consent are never far away, Angela recalling the abuse she suffered from Tess, her ex, who made her into a vampire, and Herman showing us an another model for vampirism. This is in a story strand beginning in San Francisco just before the earthquake of 1906 where Meijing, who has been trafficked and abused, falls into the company of Master Hiram, an even more ruthless vampire than Tess - and one with a dash of religious fervour to him.

As Chloë digs deep into ancient legend and magical practice to find an answer to Angela's fears (and more fundamentally, a way that she can make an acceptable life with a person who can only emerge when it's dark), Angela wonders if she might not find answers with Tess after all. It's a mark of just how much Herman makes the reader feel for his characters that as the tension between them over this trip rises (Chloë wants to go along, fearful of losing Angela, while Angela resists that, knowing how dangerous Tess might be to the woman she  sees as having stolen her lover) I almost didn't want to turn the next page from concern that one or the other would go too far, say just too much, from a mixture of love and fear and provoke a split.

Almost. This is a compelling and involving fantasy romance, and I HAD to turn that page.

Angela's quest takes her physically further and further from Boston, and Chloë's... well... it's hard to describe. Further spiritually? Or mythically? Chloë seems to find herself travelling into a weird realm that blends the symbolism of Boston's past with that of myth and story, a sort of Otherworld - and we know don't we, that the Otherworld is perilous place? Both women face dangers, in a story set in those weeks of later 2000 when a US election was decided by "hanging chads" and politicised legal cases - a setting with echoes, of course, twenty years later.

I love the way that in this book Herman gives us a deft fantasy blending vampirism, lycanththropy and witchcraft while not shying away from the more incongruous aspects of that (Angela, an astrophysicist, is in despair at the logical contradictions - what would happen if werewolf Mike were to visit a lane with no moon? Where does the mass-energy come from (an go) when he transforms?)

I love the way he also gives us a complex modern romance, one that requires supernatural issues to be faced in the same breath as more conventional relationship problems (and which combines the two creating some really knotty life difficulties).

But above all I love the way he grounds this in a response to and depiction of some of the darker parts of reality: in the desire Angela and Chloë have to live their lives like any other couple, despite political trends that want to deny them that, or in the prejudice faces by Meijing through nearly a century. It's a very affirming book, with people, in their diversity, finding a way despite human - or supernatural - obstacles to express their love.

For more information about Bleeding Hearts, see the publisher's website here - and the other reviewers joining in the blast, on the poster below.

You can buy Bleeding Hearts from your local bookshop (but hurry, before they all go!) or online from UK Bookshop dot org, or Hive Books, Blackwell's, Foyles, WH Smith, Waterstones or Amazon. 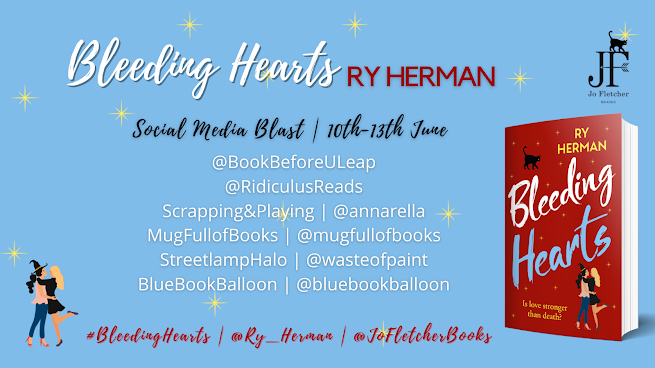