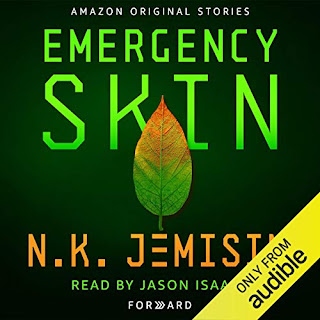 Emergency Skin
NK Jemisin
Amazon Original Stories, 17 September 2019
Available as: Audio, 1 hour 4 mins, e
Narrators: Jason Isaacs
Source: Audio subscription
ASIN: B07X4JS37T
Emergency Skin is a remarkable novella, not least for the fact that Jemisin tells a story in which we never hear directly from the point of view character.
He - though the pronoun is moot, for reasons developed in the story which it would be spoilery to give here - is on a mission back to planet Earth (or "Telos" as we're told it should be called) to collect biological samples needed by the distant colony which is his home. Earth is expected to be a hostile wasteland, given that the colony in question was established to house those who had fled environmental destruction.
We're given this in formation by a narrator who is apparently an AI designed to assist the protagonist with this task. We only hear the AI's side of the conversation, together with the voices of one or two people he meets on earth (no, it's not a desert). The AI is a marvellously querulous and elitist construct, reflecting, of course, the views of its masters and betraying their own elitist and blinkered thinking. It's lovely to hear this consciousness come up against the conundrum that Earth simply seems to have flourished ones its makers - supposedly the best, brightest and most innovative of humanity - shoved off.
Again, no spoilers, but Jemisin does gives us an object lesson here in thinking beyond the dreary and reductive worldview of the tech lords and their political lapdogs. It's an impressive argument, albeit necessarily compressed given the form (I would like to see it articulated at greater length, perhaps in a novel) - essentially a challenge to the economic orthodoxy that privileges immediate profit above all. And she shows how openness to alternative view points, and courage, can lead us to challenge even the most ingrained assumptions. That's a lesson needed now more than ever, I think.
In all, a thought provoking and satisfying novella, due in no small part to Isaacs' narration, which captures the cadences both of the smug AI and of several person whom the protagonist encounters on Earth. As I've said, we never hear his voice but the compelling dialogue almost makes you think you have.
I'd recommend.
Email ThisBlogThis!Share to TwitterShare to FacebookShare to Pinterest
Labels: 2019, economics, environment, far future, Politics, Post Apocalypse, SF