#Blogtour #Review - This is How We Are Human by Louise Beech 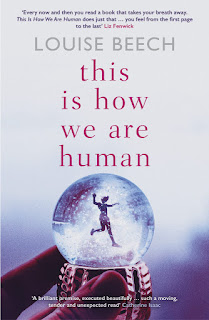 This is How We are Human
Louise Beech
Orenda Books, 10 June 2021
Available as: PB, 289pp, e, audio
Source: Advance PB provided by the publisher
ISBN(PB): 9781913193713
I'm grateful both to Orenda Books for sending me an advance copy of This is How We Are Human to consider for review and to Anne at Random Things Tours for inviting me to take part in this blogtour.
I was rather wary of this book. It's about a young man, Sebastian, who has autism, how his mother Veronica cares for him - and how she sometimes gets it wrong. It is very close to home for me. My daughter (now in her twenties) has autism. She has had her ups and downs, as we have we in seeking support and trying to ensure she can live an independent and fulfilling life.
There are differences: young men and young women are seen by society in slightly different ways. Also, my daughter has learning disabilities and is non-verbal, which Sebastian in This is How We Are Human is rather fluent, not to say loquacious. Still, I recognised a lot here. As the parent of a young person like Sebastian, your life becomes focussed on your child. You become their advocate, their interpreter to an often shockingly indifferent world. See for example the episode at the start of this book, where Veronica is seeking help from a sexual health clinic for Sebastian, who is suffering all the frustrations of a young person without a girlfriend or boyfriend and who has little prospect of finding one. The response of the other clients in the waiting room, and of the doctor when eventually Sebastian and Veronica meet her, is hardly helpful.
As a parent, you also, inevitably, fail. Quite rightly, adults who have autism want to control their own lives rather than having them managed by their parents. The difficulties they have with that can be considerable. In This is How We Are Human likeable, slightly posh, steely determined Veronica, with her extensive collection of headscarves, is simply at her wits' end. She is doing her best, but she has reached her limits - and the world is beginning to shut down for Sebastian as he, also, begins to reach and cross boundaries that the world sets for people like him.
Veronica isn't, though, one to give up easily. So she turns to 'high-class escort' Violetta for help.
Violetta is a fascinating, vividly portrayed character - a young woman who needs to raise money quickly and has found a way to do that. She's beginning to recognise that there is a cost and we see vividly depicted episodes of PSTD. (Do be aware that the book is explicit in places. It is never prurient or exploitative, but does feature Violetta being abused (and one incident takes that so the extreme) as well as other episodes that chip away at her self-esteem. We learn a lot about her background and the trap she is in, paying for her father's care and how she, too, shows courage and finds her way through. In fact this book is as much Violetta's as it is Sebastian's and the strange, quirky relationship they build is well observed and, in some ways, heartbreaking. But then a lot about this book is heartbreaking, from Sebastian's frustration (and his shrewd understanding of it) to the bullying he suffers to the way that the default reaction of the wider world, when any problem comes up, is to try and tidy him away. (I've experienced this - again from the parent's perspective - when Daughter, frustrated beyond endurance, committed some social outrage to a chorus of tutting from the adults around. My tip? The most accepting, welcome place we ever found was our local McDonald's).
This is How We Are Human is, as I said, a book that comes close to home for me, and some of these times it provoked tears. I really don't think I'd have read it if it had been written by anyone other than Louise Beech, whose honest, human and brave stories I've simply come to love. When I saw what she was writing about, I knew I could trust her with a subject like this and that she would respect and understand the Sebastians and Veronicas of this world (and, indeed, the Violettas as well).
And she did.
So, this is rather wonderful. It is a deeply human book, the title so apt, because the reality of autism really does challenge narrow minded assumptions about what it is to be human and demand that we so-called neurotypicals take a good hard look at ourselves.
On a lighter note, for fans of Louise's writing, I can confirm (slight spoiler!) that Bob Fracklehurst is back!
About Louise Beech
Louise Beech is an exceptional literary talent, whose debut novel How To Be Brave was a Guardian
Readers’ Choice for 2015. The follow-up, The Mountain in My Shoe was shortlisted for Not the Booker Prize. Both of her previous books Maria in the Moon and The Lion Tamer Who Lost were widely reviewed, critically acclaimed and number-one bestsellers on Kindle. The Lion Tamer Who Lost was shortlisted for the RNA Most Popular Romantic Novel Award in 2019. Her 2019 novel Call Me Star Girl won Best magazine Book of the Year, and was followed by I Am Dust.
For more information about This is How We are Human, see the Orenda Books website here or hop on the blog tour and read some of the reviews listed on the poster below.
You can buy This is How We are Human directly from Orenda, from your local bookshop, or online from Bookshop, Hive Books, Blackwell's, Foyles, WH Smith, Waterstones or Amazon. 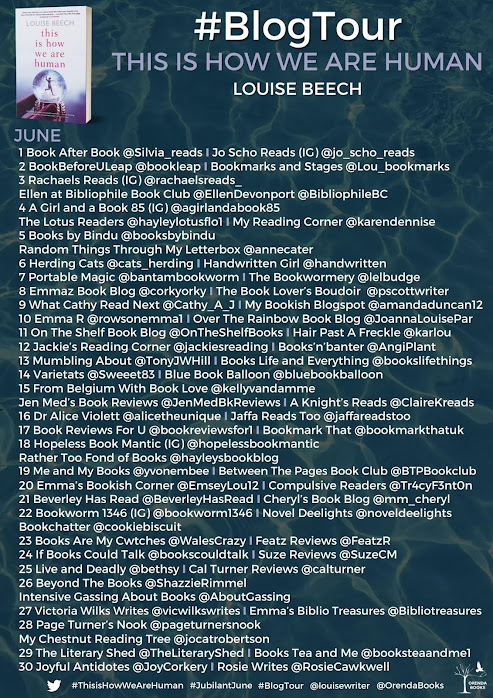