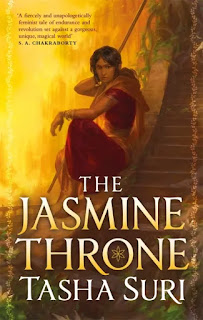 The Jasmine Throne (The Burning Kingdoms, Book 1)
Tasha Suri
Orbit, 8 June 2021
Available as: PB, e, audio
Source: Advance copy provided by the publisher
ISBN(PB): 9780356515649
I'm grateful for an advance copy of The Jasmine Throne from Orbit.
In The Jasmine Throne, Tasha Suri gives us a complex, absorbing and vivid fantasy adventure in a world inspired by the cultures and history of the Indian subcontinent. The storyfollows the lives of two women - a princess and a maidservant.
Malini, the princess, has been imprisoned because she refuses to accept the will of her brother, the new Emperor Chandra. Accepting his will would have led to her death: but it seems his plan is for her to find death anyway, forgotten in a distant corner of the empire. Malini is, though, educated, brave, and has taught herself both statecraft and war. She will be a dangerous enemy, if she can escape and she is perfectly capable of manipulating and using a young maidservant for her ends.
Priya, the maidservant, is a former temple child who now serves her nations's conquerors in the Regent's, the Imperial governor's, palace. She has secrets of her own though. When the temple was destroyed, she was learning to draw on the deep magic of the deathless waters. Now rebellion is flaming in Ahiranya and the rebels want to use her magic to support their uprising. But Priya has blotted out her memories of her earlier life to escape the trauma that she went though...
The Jasmine Throne is a very rich, morally ambiguous mixture of a book, exploring both personal dilemmas and relationships and the complex rights and wrongs of rising up against a cruel empire. There are those here who have tried to save what they can of Ahiranya's culture and traditions from the despotic Parijati empire. They aren't exactly wrong to have compromised. There are also those who see that the process of erasure - the very language has been obliterated - will not stop, and who demand more drastic action. They aren't completely wrong either, though this tactic may bring further destructions and suffering.
But while politics and power games may shape this book, The Jasmine Throne also throbs with the powerful heartbeat of personal relationships, and in particular of one relationship, that between Priya and Malini. For both, duty - to their own nations, their own cultures - may allow some cooperation, but they have different objectives and loyalties, meaning that same duty may also demand some manipulation. As if that wasn't complicated enough already, everything is also mixed up by the obvious pull that we can see between the two. This both creates new motivations - as they explore their frank interest kin one another - and muddies them, with actions, behaviour and motivations unclear and misunderstood. Suri really gets inside Priya and Malini, making the reader sympathise deeply with both for what they have lost while also making it clear that neither is an uncomplicated hero.
And there is more! Priya's culture would allow women to be lovers: Malini's wouldn't, but she's still not above using whatever levers she can find to escape and pursue her long-term plan to restore her "good" brother, the monkish Aditya, to the throne. So there's a thread of subversion - and a fear of discovery - here too, that perhaps undercuts how honest anyone can be.
Add in a vengeful mother, spies, a martinet Lord on the make who wants to replace Priya's master, the regent of Ahiranya, a rampant and incurable epidemic and a couple of meddling princelings, and you get epic fantasy at its best in a fresh and intricate setting which has, I'm sure, many more secrets to reveal.
I would strongly recommend The Jasmine Throne. (Those who've already enjoyed Suri's Empire of Sand and Realm of Ash won't of course be surprised by how good it is - and if you haven't read them, you should!)
Email ThisBlogThis!Share to TwitterShare to FacebookShare to Pinterest
Labels: 2021, empires, Fantasy, Indian inspired, magic