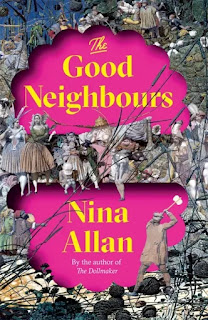 I'm really grateful to Ana McLaughlin at Riverrun for an advance copy of The Good Neighbours to consider for review. Nina Allan's books are among my favourite reads of recent years so I was VERY excited to that The Good Neighbours was coming - and indeed, it's classic Allan, an apparently simply story but which proves to have many depths and currents to it.

We first meet Cath, whose story this (mainly) is, getting ready, with her friend Shirley Craigie, for a Saturday trip to the Big Town. Shirley's doing her makeup, Cath, less daring, just her nails. There's a warm teenage friendship between the two young women which comes over strongly in this first scene and to which Allan returns again and again. The detail is goods: as the two leave they hear Shirley's mum Susan singing 'like Lizzie Dreams on Playdays' and this moves on to a memory of her (jealous, overprotective?) dad, John.

Cath and Shirley live on an island, not hopelessly remote but a ferry ride away from the mainland, and then a bus trip into town, which as it happens is Glasgow. That gives the day a bit of a frisson - if you miss the ferry, you're stranded - as does the girls' sneaking into a bar for vodka and Shirley's nicking a camisole from a shop. Looming behind that, though, is John's attitude of control and general disapproval. (Cath's parents don't like her spending time at Shirley's house).

Fast forward a few years and Cath is working in a Glasgow record shop and trying to establish herself as a photographer. She's in a dead-end affair with a married man, and Shirley is nowhere on the scene. Cath is working on a photograph project to document "murder houses" - places where killings have taken place. We see her examine a house in Glasgow, delving into the case - the victim and her background, and the presumed murderer. Then she decides to return to the island - where the house she's interested in is that one we saw at start of the book, Shirley's, house, where she, her mother, and her little brother were murdered by John Craigie.

I loved the way that, in this story, Allan shows us Cath essentially being stuck. What happened back on the island derailed her life, turning her from a straightford path - school high flier, good university, good job - to... something else. The delicacy of the way Allan does this is impossible to explain without oversimplifying. It's not "my childhood friend was murdered and I never came to terms with that" (though that is true). It's more about understanding, knowing, seeing. Part of that is learning what actually happened to Shirley and her family - there is an official account but it doesn't satisfy Cath - but part is also about appreciating her, Caths's, own place in everything. Was what happened, at some level, her fault? Cath decides to find out - not only by viewing the house where everything happened (now owned by Alice, a financial analyst seeking refuge from London) but also by looking into the background (which proves surprisingly shifty).

That makes the story sound like a crime novel and if you want to see it that way, it is a fine crime novel. But there is much more to it. Allan's novels often come with hidden wiring - they may allude to nested fictional worlds either overtly (such as through stories-within-stories) or implicitly through themes of craft or artistic accomplishment, skills which create their own worlds or make gateways to others. The Good Neighbours is apparently more straightforward but it still has at its centre a whiff of strangeness.

There is a man - Craigie - who cannot read, but seems to have had a rare talent for working in wood ('wood was warmer than stone and wood was kind') and who has encoded his life in some sense in a doll's house (but the dolls themselves are missing). Similarly, Alice has formidable talent for maths - her breakdown is connected with her (mis?)using this in finance. Dovetailing with that are speculations about "many worlds" quantum mechanics and its possible links to fairy, supported by the parallel careers of (real) Victorian painter Richard Dadd and (fictitious) linguist and mathematician Mabel Konig, both of who returned from trips to the Near East with changed perspectives on art, nature and reality.

All of this creates a sense of something strange which remains tantalisingly close, yet impossible to grasp. So, again, you could focus on those aspects of the novel and see it as fantasy/ SF. But while that background, and the theme of the "Good Neighbours" themselves, in folklore, in Craigie's early life and in Alice's family stories, are always present here, like a river flowing nearby - stop and listen for a moment and you can hear it running - they are not "all" the story. In reality I think this book is a wonderful dance of all those themes, and more, for example Craigie's violence and controlling behaviour (both their origins and the failure of an apparently close-knit community - in fact, more than one - to confront that). This in turn has echoes I think in Alice's relationship with her partner, something we only see in glimpses.

There are some secrets here, which emerge in their own good time, so, yes, in some sense what actually happened is clear by the time the book closes, but the joy of this chewy, intricately textured novel is the journey to that point, rather than any satisfaction at having a mystery solved. It is a book to be read slowly and savoured and indeed, re-read. I would strongly recommend and I think (while it is still early days!) this will be one of my favourites of 2021.

For more information about The Good Neighbours, see the publisher's website here.