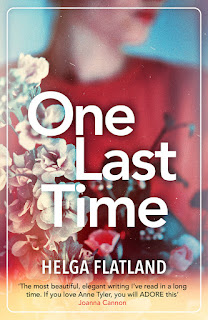 I'm grateful to Orenda Books and to Anne at Random Things Tours for providing a free copy of One Last Time and for inviting me to take part in the tour. I was especially delighted to be asked if I'd join the tour because I totally loved Helga Flatland's previous book for Orenda, A Modern Family. Giving a sophisticated, vivid, portrayal of modern, grown-up life - taking as its peg the decision of middle-aged parents to amicably divorce - A Modern Family was one of my standout favourites of 2019, and I was keen to see what Flatland would do next.

One Last Time is similarly focussed on family dynamics exposed by a shattering event, but it carries an even greater emotional charge since that event is the diagnosis with cancer, of Anne, a stolidly independent woman in her mid 60s. I tend to shy away from stories about cancer and from awareness campaigns and such: my father died of it when I was quite young, I just don't want to go there.

But, well... with this book, Helga Flatland got right past my defences.

First, it's not, in the end, a book "about cancer". Anne has a daughter, Sigrid, a doctor, and grandchildren: Mia, the eldest, is a bit of a handful for Sigrid and her partner Aslak. Mia's interested in her dad, Jens, who abandoned Mia when she was pregnant and Sigrid resents that. Anne's husband Gustav has been in a care home for some years after a series of strokes, leaving Anne (happily, it seems) alone in the remote countryside, visiting Gustav often but living her own life (she had a lover for a while). Sigrid lives in Oslo, and her brother Magnus flies in and out from his job on the oil rigs. The family dynamics are complex, and I got the impression that things work because of the space between everyone - as soon as any two of this family get close, sparks seem to fly.

Now, though, that sense of space seems bound to end.

The relationship between Anne and Sigrid in particular, as shaped by Anne's deepening illness, is the emotional heart of this novel. The story is so carefully observed, with chapters told from the perspective of each, sometimes reexamining the same conversations and events, sometimes passing the action like a relay baton from one to the other. There is simply so much here, from the different perspectives on Anne's treatment to radically conflicting accounts of Sigrid's childhood. Sigrid sees Anne as having been a rubbish mother, especially after Gustav became ill, Anne indignantly refutes this. Sigrid silently accuses her mother of being "selfish" regarding her illness, Anne's emotional resources are engaged in worrying over Gustav and over the loss of the little things - like her morning dip in the lake - that form her life. There are troubling episodes around the young Sigrid that are never completely explained or closed, but she seems to have had more support from her bother than from her mum.

Now, perhaps, Sigrid thinks, the prospect os death will persuade Anne to examine her life and make amends. She holds this viewpoint so strongly that I think much of her concern for her mother - the pressure for her to continue treatment, the demands that she drops her moving swimming session - seems motivated by that belief, as though by dying sooner rather than later Anne will somehow avoid that reckoning.

That's only one of the emotional currents in this complex, satisfying book. There are many more. All of it churns away (mostly) beneath the surface, seldom coming to an out-and-out row, although sometimes disagreements about proxy subjects, or developments in the lives of others (like Mia and Jens) move into focus and, as it were, draw down the lightning. One gets a real sense that a whole lifetime of emotional tension and compromise is suddenly coming home to roost, not actually demanding a final resolution (sorry, Sigrid) but still requiring attention, like that rattle in the car's engine which can't be ignored any longer longer.

The moves and countermoves between Anne and Sigrid and Mia are too many, too subtle, to summarise and I won't try. Flatland is awesomely good at drawing them as characters, making everyone flawed but sympathetic, annoying at times, downright WRONG at others but always engaged, always involved. It's a book that, if you have any heart and soul at all, will just melt them, in a good way. Keep the tissues handy.

Given the subject matter - and that the story here isn't plot driven, doesn't admit of a tidy ending with everything sorted - the ending was never going to be "they all lived happily ever after" but even so, I found it uplifting, as well, of course, as being sad. Exploring courage in all its forms - courage in relationships, courage with illness, the courage, at the right time, not to be brave - this is a deeply human story and for me confirms Flatland as a writer whose books are not to be missed. I'm so glad I read it.

Helga Flatland is already one of Norway’s most awarded and widely read authors. Born in Telemark,
Norway, in 1984, she made her literary debut in 2010 with the novel Stay If You Can, Leave If You Must, for which she was awarded the Tarjei Vesaas’ First Book Prize. She has written four novels and a children’s book and has won several other literary awards.

Her fifth novel, A Modern Family (her first English translation), was published to wide acclaim in Norway in August 2017, and was a number-one bestseller. The rights have subsequently been sold across Europe and the novel has sold more than 100,000 copies. One Last Time was published in Norway in 2020, where it topped the bestseller lists, and was shortlisted for the Norwegian Booksellers Award.

For more information about One Last Time, see the Orenda website here or consult the blog on the poster below!

You can buy One Last Time via Orenda at the link above, from your local bookshop, or online from Bookshop, Hive Books, Blackwell's, Foyles, WH Smith, Waterstones or Amazon. 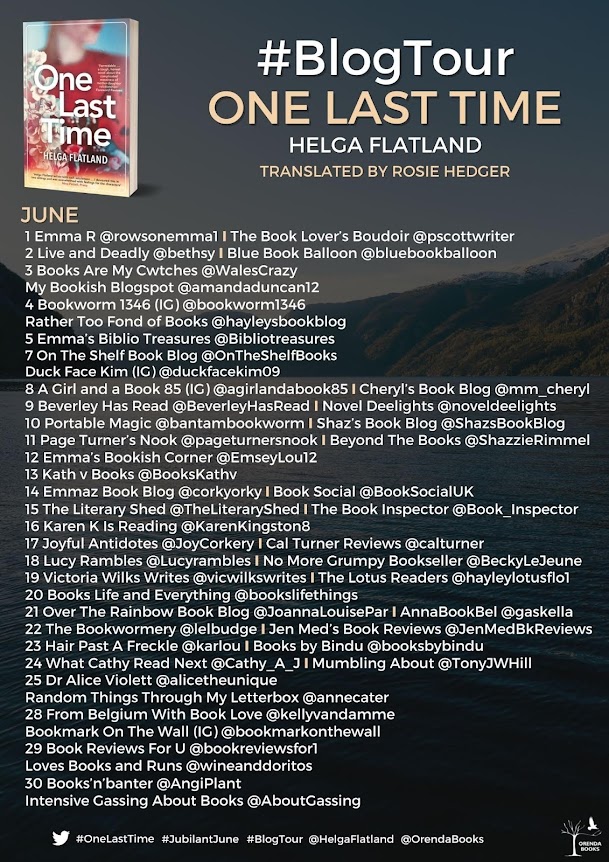