#Review - Bad Apples by Will Dean 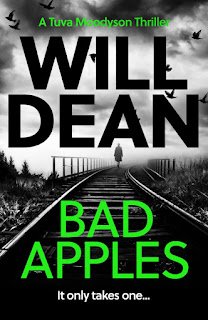 Bad Apples (Tuva Moodyson, 4)
Will Dean
Point Blank (Oneworld), 7 October 2021
Available as: HB, 352pp, e
Source e: Advance copy provider by the publisher
ISBN(HB): 9781786079817
I'm grateful to the publisher for an advance copy of Bad Apples.
Tuva Moodyson is back! And not before time. I'd been missing the adventures of Sweden's foremost local reporter, adept as she is at getting caught up in murder while she attempts to describe the daily goings on in the town of Gavrik (aka - to her - Toytown).
At the end of Black River, Tuva was, you will recall, set for new challenges when her paper, the Gavrik Posten, absorbed its rival in neighbouring  Visberg - a place which we soon learn makes Gavrik look like a bustling metropolis. A hilltop town, only approachable via one severely graded road, Visberg has its own traditions and its own (numerous) aristocracy in the wealthy Edlung family who run the place along with so-called "Sheriff" Hansson. And it's not about welcome an outsider like Tuva to investigate its doings.
So it's not, perhaps, the best start when Tuva stumbles across a mutilated corpse on her way to introduce herself to the place...
In Bad Apples, Will Dean repeats the success of his earlier Tuva books, creating an atmosphere of Gothic horror and plain weirdness alongside a modern police investigation. Again, the forests loom large, enclosing Tuva and the other characters. Don't those forests represent the wide open spaces of nature, though? Well, they might - if they weren't full of hunters slaughtering the equally numerous elk - creatures you really don't want to cross. Fusillades of gunfire, men (and women) armed to the teeth, references to weapons - rifles, knives, axes - pepper the book, as though hinting at all the opportunities for a quick (or slow and painful) death.
And as if that wasn't enough, Hallowe'en is getting close. Dean explains how, despite the reservations of older members of the community, this American custom has become a Big Thing in Sweden. But first we have to get through the unique Pan Night, Visberg's own special festival, when rotting apples lie on the town streets and all kinds of mischief is indulged. Tuva's there, of course, trying to solve a crime, and stop a criminal who is not above sending her coded warnings. (Also, of course, indulging her sense of curiosity).
I just can't convey how creepy this book gets - it's perhaps something to do with the contrast between Tuva's life in Gavrik (of all places) and the state of things in Visberg. At home, as she's now beginning to think of it, she's back on the rails, off the booze, happy with her friends, her job (she has a promotion) and especially her  girlfriend Noora.  But at the other end of the Visberg road is a dark, closed community with its own secrets.
We see Tuva shuttle back and forth. Readers of the previous books will recall that she won't take crap from anyone, but also that she's still grieving for her mother, still feels she let her down and will always see echoes of that in what goes on around her. All this weirdness isn't, one might think, good for her. I do, bizarrely, feel a bit protective towards this fictional person, who - you won't be surprised to learn - goes through quite a lot in this story. I might even go so far as to say that Will Dean is a MONSTER and shouldn't be put in charge of a vulnerable character like this...
Tuva Moodyson has, I would say, for me, joined that group of crime protagonists who are more important to the reader than the mystery they're apparently trying to solve. The details of that do unspool but I was worrying so much about Tuva, I didn't try to hard to read the clues (though they are there). Accordingly I wasn't prepared for the white knuckle conclusion to this book.
I. Wasn't. Prepared. At. All. I say again, Will Dean is a MONSTER.

In short, another book from Dean that is as much (more) an empathetic character study as a crime novel, but which still has plenty of thrills and excitement and some real shocks, setting up a perfect opening to what I profoundly hope will be a prompt Book 5 (and what I know will contain its own share of fear and regret...)

Finally - fans of Tuva's books will be delighted to know that the creepy wood carver sisters are back, and their trolls are more grotesque than ever...