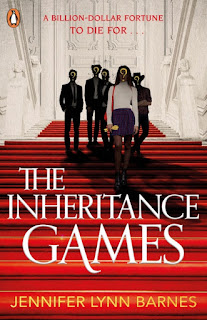 The Inheritance Games (The Inheritance Games, 1)
Jennifer Lynn Barnes
Penguin, 3 September 2020
Available as: PB, 384pp, e, audio
Source: Audio, and advance e-copy via NetGalley.
ISBN: 9780241476178
I'm grateful to the publisher for an advance e-copy of The Inheritance Games via NetGalley.
The Inheritance Games is a catchy, read-another-chapter novel with a great premise. I did feel however that it slightly let itself down by the use it makes of its central character.
Avery Kylie Grambs is a bright young woman in a difficult situation. Her mother has died and left her in the care of her half-sister and dodgy boyfriend, she's poor, and her father is nowhere to be seen. In the opening chapters, however, Jennifer Lynn Barnes establishes Avery as very much on top of things: juggling home, school and various part time jobs, Avery budgets her time carefully, knowing just how much effort to put in, for example to get acceptable grades (she has clear career plans) and how much to spend earning money (supplemented by poker games after school). As we meet her she's coping with the school's suspicion that she cheated in a physics test (she didn't: for once, she allowed herself to go all out on the revision, and scored 100%). She has this in hand though, and coolly offers to resit the test.
But we never learn the outcome of that, because instead Avery is whisked away as the apparent heiress to the Tobias Hawthorne fortune (forty-six billion dollars - or was it forty two? As the man said, a billion here, a billion there and soon you're talking real money).
Required to live in the Hawthorne house, among a bunched of p****d-off Hawthornes who regard her (with some reason) as an interloper who has scooped their fortune, Avery has to face a rather different set of challenges. It's not only the Hawthornes - of whom there are so many that it took me a little while to sort them out - but the house itself is the epitome of creepy gothic. Modern it may be, but it rambles, with innumerable wings, facilities (solarium, cinema, bowling alley...) and also secret passageways and tunnels. And set against this background, it's clear that Old Man Hawthorne left a surprise behind: a puzzle to be solved. Teaming up with first one and then another of the resentful Hawthorne brothers, Avery seeks to solve the mystery - and find out why she was chosen to inherit.
While always looking over her shoulder, in case somebody decides she would be better off out of the picture...
It is, as I have said, a fun setup and the story trots along at a brisk pace with a steady flow of revelations, twists and reversals, many of them involving a mysterious young woman called Emily - a mysterious, dead young woman - and her relations with the Hawthorne boys. The story is never less than enjoyable, and especially well suited as an audio, the shortish chapters moving from one cliff hanger to the next. (Christie Moreau's narration is excellent, although the - I assume - Texas accents she assumes need a little checking against the text: I didn't realise till late on that one of the brothers was calling Avery "Heiress", I thought to my puzzlement he'd invited the name "Arris" for her).
But - and this isn't a big "but" - I really felt that Avery lost much of her initiative, and was considerably less interesting, once she arrived at Hawthorne House. There are many books, I know, which use the trope of "character suddenly whisked into different circumstances" and this shift can be difficult to get right. As a reader, I generally want the character to begin exploring and testing the new situation they're in, rather than being generally boggled by it. It's understandable and natural for them to be floored by learning that their life is to be transformed, but I felt that Avery didn't live up the promise she showed in the first few chapters by doing this.
She has, admittedly, some immediate and personal problems that knock her back. Avery would normally discuss things with her best friend Max, but Max is half a country away and her parents apparently live in the 19th century and don't approve of telephones (or swearing - Max is continually making up coy euphemisms like "fax"). And Avery's sister Libby, who Avery might also rely on, has that no-good boyfriend, who is clearly after a cut of the estate, so relations are tricky there. So Avery's basically alone. Yet - allowing for all this - Avery still came over to me as quite passive and reactive. Yes, she's brave and determined and won't take any nonsense, but this comes over in verbal jousting with Hawthorne brothers rather than in, say, assessing her position and making plans, and the consequence is that the book is a bit "one thing after another".
Add to that, that the final reveal at the end of the puzzle is - a bit flat, and I felt that this book rather disappointed. I can see that further books in this series are planned, so perhaps it's understandable that the climax here couldn't be too much of a bang, but still, I think it's a pity.
So overall, great fun, very readable, but it could have been so much more.
For more information about The Inheritance Games, see the publisher's website here.
Email ThisBlogThis!Share to TwitterShare to FacebookShare to Pinterest
Labels: 2020, crime, inheritance, puzzle