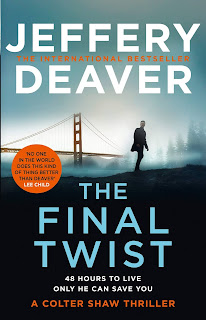 The Final Twist (Colter Shaw, 3)
Jeffery Deaver
Harper Collins, 13 May 2021
Available as: HB, 416pp, e, audio
Read as: advance e-copy
ISBN(HB): 9780008462864
I'm grateful to the publisher for an advance e-copy of The Final Twist to consider for review and to Anne Cater for inviting me to take part in the book's blogtour.

The Final Twist is... exactly what it says. Very much of a piece with The Never Game and The Goodbye Man, the events of all three books taking place over two or three weeks, it is the culmination of Colter Shaw's attempts to avenge his father and complete the latter's quest to expose corporate chicanery (the reason the Shaw family took to a survivalist lifestyle in their remote mountain compound).

To give any more than that risks being spoilery, so while I'll try to minimise that, you have been warned!

I have loved these books and especially Shaw's - he's described here as 'The Restless Man' - nomadic lifestyle, travelling in his recreational vehicle the length and breadth of the US for posted rewards. I like his modesty, his self-sufficiency, above all his competence and planning. While Shaw may get into some desperate scrapes, he never does so without thought and care and he generally has a few cards up his sleeve.

Inevitably there is less of that lifestyle here. Really Shaw has been hunting down the truth behind his father's obsession and death, and now he's close to the deadly secret behind both. Back in San Francisco, where he made enemies in The Never Game, he's located a safe house of his father's where he may find some answers. Perhaps even answers to questions he hasn't thought of... But of course this means he's also closer to the shadowy BlackBridge corporation which seems to be at the heart of the mystery - and closer to the danger it poses.

This book was really fun to read. To tell you how much fun, I was reading a pdf copy on my iPad which I don't find the easiest on the eyes (no, bloggers don't get sent special vellum copies inscribed by the publicists in gold ink, I wish...) but still I simply CONSUMED this book, racing through it in pretty much one session and ending at some unhallowed time early in the morning. Deaver simply leads the field in page-turning, thrill-packed thrillers full of jeopardy and sky high stakes - and The Final Twist proves that.

We were led to expect corporate chicanery, BlackBridge flooding districts with cheap drugs to ease the way for clearance and redevelopment. If that seemed a slightly underwhelming reason for the persecution of Shaw's father, well, it does come emerge that there was more to it than that. But to get to that truth Shaw needs to solve one last riddle - and he's then faced with an unexpected moral dilemma. That aspect is, though, only part of what's in this book. Shaw (and BlackBridge) aren't the only players on the field, and some of them seem to have reach, and resources, that go beyond his means to oppose. It's one of those puzzles he might be able to work out if only people would stop trying to kill him and he could think for a while. Family is also involved, and we learn a lot more about Shaw's earlier life and the tensions and disputes that led up to his father's death. It is a satisfying ending.

I had been a bit worried that the focus on the wider mystery, rather than a missing person reward case, would take the edge off The Final Twist compared with the earlier books. I needn't have been concerned. It is a slightly different sort of story, but The Final Twist is as addictively readable as them, with a little extra edge all of its own.

In short, it's as perfect as one could wish - definitely not a place to come into this series, you do need to read them in order - but a fine completion to a trilogy. Is it a completion? Is this really the FINAL twist? Please Mr Deaver, I'd like to read more about Shaw's eccentric career and he seems to have blazed a trail for the peripatetic lifestyle (viz Nomadland), which, as I have said, I find fascinating.

For more information about The Final Twist, see the other stops on the tour, and the publisher's website here.

You can buy The Final Twist from your local bookshop, from Bookshop dot org, Hive Books, Blackwell's, Foyles, WH Smith, Waterstones or Amazon. 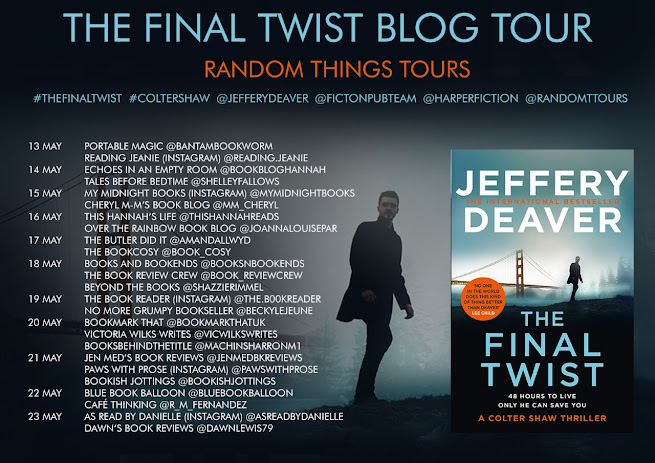