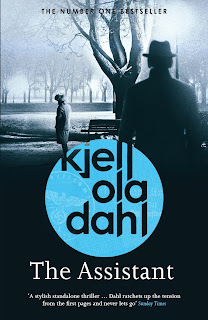 The Assistant
Kjell Ola Dahl (tras Don Bartlett)
Orenda Books, 13 May 2021
Available as: PB, 293pp, e, audio
Source: Advance copy provided by the publisher
ISBN(PB): 9781913193652
I'm grateful to Orenda Books for an advance review copy of The Assistant and to Anne Cater of Random Things Tours for inviting me to take part in this blogtour.
The Assistant takes the reader to a fascinating epoch - Norway, on the brink of the Second World War, where former smuggler, Jack Rivers, and ex-cop, Ludvig Paaske, run a detective agency together. (Rivers is the "Assistant" of the title). In the best traditions of noir, a woman turns up one morning at their offices and inevitably, trouble follows...
Actually The Assistant goes to two fascinating periods - alongside the 1930s story, other chapters hark back to the 20s, a world of Prohibition, speedboats, hideaways in remote fiords and gangsters' molls. This was an aspect of Norway's history I was totally unfamiliar with but am now obsessed by! Hard drink, banned from sale, is being brought in under the noses of the authorities and distributed from flatbed lorries and via corner shops and village groceries. The police (led by Paaske) and Customs are relentless in their pursuit (at one point Jack's boat gets fired on by a naval vessel) and we're witness to daring escapes, stake-outs and betrayals.
Jump forward again to 1938, and that young woman in the detectives' office dangles an apparently simple job - she thinks her husband in unfaithful, and wants him followed. But this will lead the pair into a fiendishly complex affair involving Nazi spies, Communist saboteurs intent on stopping arms exports to the Spanish insurgent forces - and some old scores. Of course we know, even if Jack, Ludvig, Amalie, Julie and Bjerke don't, that all this is taking place in a looming shadow of war, invasion and occupation.
I loved the way that, in this book, Kjell Ola Dahl juggles the personal and the national, even the international. Everyone we follow here was involved in the chases and chicanery in the 20s which were deadly serious at the time but now, looking back, seem rather like games. However, things were done - promises made and broken, betrayals carried out and accepted - that left faultiness, faultiness which persist to the later 30s, reasons for suspicion, regret and revenge. In 1938 it's as though the wars and rumours of wars have brought all that back to the surface, injected a new sense of jeopardy, of higher stakes but also - for some - an open door to opportunity.
The characterisation here is excellent. Paaske, a bit of a fusspot, a man with routines, obsessed with the state of his shoes (and judging others by theirs) but also a man missing his daughter, lost somewhere in the European maelstrom. Jack, still a bit Devil-may-care (though less so than we saw in his 20s escapades) but someone with regrets, especially about his mother's death which he missed, being in jail. Julie, a femme fatale if ever there was one. Amalie, distinctly ambiguous, a woman who has come far, clearly has secrets, and who moves in many different circles - but who nevertheless still cares for her brother, now committed to an asylum. There's a sense they have all been waiting fifteen years to begin the dance that starts now. Despite that, though, the moves are uncertain, intentions conflicted and - it seems at times - the outcomes all bad.
I really enjoyed The Assistant. (Can you tell?) There are some familiar themes and tropes but they are given new life and force and expressed in a totally different milieu from what you might expect. Yes, guns, girls, smoky clubs and spies. But also, political idealism and cold-eyed men (and women) with a lightning calculus of guilt, innocence and motivation. So much of the action is about who is second guessing who and where that will lead. Who is bluffing, and what they'll do if called. It's really, really intoxicating and often very visual: a couple of episodes take place in a villa with large, lit up windows so that key events are seen by other characters as though on a theatre stage or the silver screen itself, pointing up the theatricality, the film-like quality of the whole series of events that plays out - with the drama maintained at high pitch till the last moment of the last reel.
Don Bartlett's translation feels classic noir, falling into an easy, raconteur's style that yet points up the atmosphere of a foggy morning in Oslo or a dark night out on the fjord.
An intoxicating read, best enjoyed, perhaps, late at night with a glass of the hard stuff to hand and rain pouring down outside...
For more about The Assistant, see any of the stops on the tour (listed on the poster below) or visit the Orenda website here. You can also follow links from there to buy the book, or else get it from your local hughstreet bookshop, or online from Bookshop dot org, from Hive Books, Blackwell's, Foyles, WH Smith, Waterstones or Amazon.