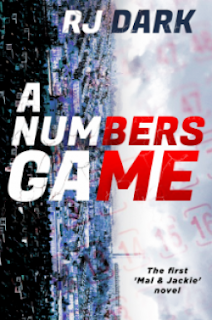 A Numbers Game
RJ Dark
Wavesback, 4 June 2021
Available as: e-book
Source: Advance e-copy provided by publisher
ISBN(e): 9781838453701
I'm grateful to new publisher Wavesback for an advance opportunity to read RJ Dark's debut crime novel A Numbers Game.
A Numbers Game introduces (and promises more of) Malachite ('Mal') Jones and Jackie Singh Khattar. Mal is a bereavement counsellor/ con artist/ cold reader, basically a well-intentioned fraud who comforts those who've lost someone. Jackie is a 'legitimate businessman' who takes protection money and installs security for all the local firms (all the easier to gain entry afterwards, perhaps). But he seems to have a heart of gold: as well as beating Mal up when they were kids, he systematically taught him self defence, and before taking his money, he checks that Mal can afford to eat.
The action takes place in and around the Blades Edge estate in Yorkshire, a place on the edge in many ways: scheduled for redevelopment till the money ran out, hosting problem families and grim sink districts as well as some prettier areas whose residents are desperately trying to keep from going under. There are also crime lords and a school which has managed to claw its way up the rankings. I enjoyed how Dark shows this area in all its contradictions, revealing a fascinating array of opinionated and distinct characters.
At heart though, this is a crime story. The hinge of the plot, revealed early on, is a lost lottery ticket connected with a death. As you'd guess, where there's a death, there's a mystery. However it's not the one you might expect - the actual nature of the crime is hidden for some while.
What kicks things off is Jackie wanting to help a recently bereaved widow whose husband died holding that ticket. If Mal can find it - whether he has to fake psychic contact with dead Larry or not - then it might help Janine and her son escape the Edge. You'd think that, and £8 million prize money, would be sufficient motivation for any amount of chicanery but actually, no. There is really a lot more happening here. To begin with, Larry's dad was 'Trolley' Mick Stanbeck, the gangster who runs the Edge, and his other two sons, nicknamed the Kray Twins, soon take an interest in Mal, as do a pair of Russian ganstaers. None of them have his long term wellbeing at heart, and nor do DI Harrington and DC Smith. (There's a pattern here - if Mal hears a knock on his door and sees he has two visitors, he'd better watch out).
As things escalate, becoming more and more complicated both in terms of what's actually happened and of the depths of the fix Mal is in, Dark heightens the tension by showing where Mal's come from and what Jackie really means to him. The friendship between the two is genuine if far from simple and it's clear that Mal owes him a lot. What's less clear is exactly how involved Jackie is with the mess they're now in, and whether his protection will be enough to see off the numerous threats, leaving he and Mal both alive and free.
Combining an ingenious plot with engaging and down to earth characters, A Numbers Game resists pigeonholing: at times was tempted to think of it as cosy crime, despite the starkly depicted violence, at others it seems to play by noir rules, and the fiendishly complex situation that develops even has echoes of PG Wodehouse,  though with bullets.
I would recommend this, and I'll be interested too see what Dark does next. (I notice from one scene he's already lifted the antler motif from fellow writer and lord of literary misrule RJ Barker, so really anything is possible now).
For more information about the book and about Wavesback, see the publisher's website here.
You can preorder A Numbers Game from Amazon.
Email ThisBlogThis!Share to TwitterShare to FacebookShare to Pinterest
Labels: 2021, crime, Northern England