#Review - The Angel of the Crows by Katherine Addison 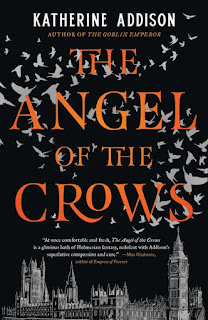 The Angel of the Crows
Katherine Addison
Solaris (Rebellion Publishing)
23 June 2020/ 17 September 2020/ 27 May 2021
Available as e, HB, 500pp, PB, 464pp
Source e: Advance e-copy via NetGalley/ audiobook
ISBN: 9781786183224 (e), 9781781088500 (HB),
9781781089101 (PB)
I'm grateful to the publisher for an advance e-copy of The Angel of the Crows. I also read parts of the book as audio.
The Angel of the Crows is probably the most thorough reworking, yet also the most authentic reworking, of the Sherlock Holmes stories that I have seen.
The book adapts several of the original stories, including novels (A Study in Scarlet, The Sign of Four and of course, The Hound of the Baskervilles) and short stories (The Copper Beeches, The Speckled Band, and more) into a magical, alternate 19th century. The two friends - a Dr Doyle (of course) recently returned injured from Afghanistan, and the eccentric, brilliant Crow - share rooms at 221b Baker Street. Gregson and Lestrade still appear, as (in slightly different guises) does Moriarty. The Baker Street Irregulars are replaced by Crow's reliance on a corps of undifferentiated angels... did I mention that Crow is an angel?
We also meet vampires, werewolves, Hellhounds, Haemophages and countless other supernatural creatures, in a world familiar - if not always at ease with - mediums, aetheric disturbances and the Fallen (but you don't REALLY want to meet one of them). You might think all of this would detract from the logic and induction which is supposed to be at the centre of the original stories, but it really doesn't. First, Crow is formidable at sifting through the data and inferring what is going on (and Doyle is no slouch either, he's not a limited Watson). Secondly, those original books were unashamedly sensationalist and The Angel of the Crows gleefully echoes that, whether in a pursuit of a suspect across London carried out with the help of a Cerberus automaton, a fight between Hellhounds on Dartmoor or an expedition into a vampire lair.
Most importantly, this book is not simply derivative - it reinterprets and develops its subject matter, giving it a genuinely new and different sensibility that is much more than mere Victorian pastiche. In the course of these adventures we come, for example, on a character here who isn't conforming to this society's gender expectations, and have to consider the consequences of that. The novel also confronts the legacies of Imperial looting and of racial diversity in London, that most cosmopolitan of Victorian cities.
All this is done while maintaining an exciting and intricate storyline, weaving together its chosen episodes with new adventures and twists on the familiar (look for the reference to "The Sherlock Arms"!)
My only reservation is, in the 1888 set novel, to the background of the (real) Whitechapel Murders. It's hardly original to set the Great Detective and sidekick (though Doyle is more than a sidekick) against that killer and I did wonder if there is really any more that can or should be said here. This was a real killer and the crimes described are real crimes. In discussing them The Angel of the Crows provides plausible analysis and, within the framework of the story, a satisfying conclusion, but on the whole I preferred the properly fictional elements in this book. And those parts certainly deliver a lot, from the thrill of a client arriving with a new case, to the sinister atmosphere of the Great Grimpen Mire to the emerging and troubling position of Crow within the hierarchy of angels in London - almost an outcast, a subject of suspicion, a cause for worry to his friends.
The audio version of the book is excellent, Imogen Church's narration inhabiting a dizzying array of characters and always evoking just the right nuances of language and disposition. Just when you think she can't possibly conjure up another one, there it is - from the slightly babbling enthusiasm of Crow to the stolid Doyle, the Irish of Moriarty and the stiffness of the London police.
I have hopes that this may be the start of a series - there are threads here which could clearly be taken forward - and I hope that is the case. Would definitely recommend.
For more information about The Angel of the Crows, see the publisher's website here.
Email ThisBlogThis!Share to TwitterShare to FacebookShare to Pinterest
Labels: 2020, crime, supernatural, Victorian