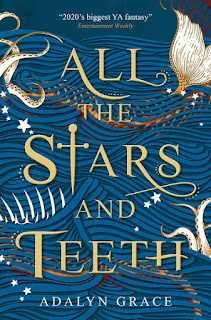 All the Stars and Teeth
Adalyn Grace
Titan Books, 4 August 2020
Available as: PB, 416pp, e
Read as: PB advance review copy
ISBN: 9781789094060
Snap verdict: Sure to be popular
I'm grateful to Titan for an advance copy of All the Stars and Teeth. I don't think I've had an ARC before that came with its own stars, as this one did, and necklace - after reading the book I'm concerned though at what curses or other magic might lie on that necklace. I will be very careful with it...
Adalyn Grace's debut novel is, at one level, a fairly traditional coming-of-age story. At the age of eighteen, Princess Amora Montana, heir to the kingdom of Visidia, is about to undergo the testing that will prove her worth to take the throne as High Animancer - wielder of the magic of souls. But on the brink of success, she gets things terribly, terribly wrong and her life is placed in danger. To survive, and to stand a chance of coming into her own, she must flee and explore her future kingdom, working to prevent a catastrophe ass well as to save her own life. Starting as a rather spoiled and ignorant girl, she grows up and begins to questions her place in things and the direction of her life.
At another level, though, Grace seems to me to be casting a rather cool eye over a familiar template and introducing some challenges to it. Yes, Amora begins rather self-satisfied and knows little of the world around her but it soon becomes clear that's because her father kept her that way - and in part he wasn't being protective, given the kingdom is nowhere near the good and harmonious place he makes out. The spotlight is soon on his failings and on the things that have been omitted from Amora's education.
Oh, and that education... well, it involved using her magic to execute prisoners. That's the essence of the test that she fails, creating a real sense of horror right at the start of this book which I felt was heightened by the contrast with the preceding party-and-food heavy scenes.
Behind Amora's growing doubts about the kingdom and her place in it is a growing sense of struggle and injustice and a feeling that the system she expected to inherit may not be the wise and just edifice she'd assumed. There is a real moral complexity in the eventual encounter with the forces that threaten the kingdom, a mixing of the personal and the political that includes Amora, her father, the cryptic, swashbuckling, pirate Bastian and a feminist mermaid ('I've a collection of men who I intend to repay for how generous they were to me... Dismemberment for anyone who ever tried to touch me. The tongue flayed from those with wicked mouths. And the heart eaten from any man who's ever told me to smile.') This book recognises that it isn't all about finding the True King (or Queen) - there must be justice beyond that. It leaves Amara, after much loss, looking to establish that, based on what she's learned on her journeys and I'm sure that in future books we'll see the difficulty of carrying this through.
In style, this book is often direct, with things seen from Amara's point of view and reflecting her limited experience (so it's appropriate, for example, that the parts set at sea aren't salted with nautical terms she wouldn't know, or that in an episode where villagers are trying to repair their homes after a storm - without help from the King - we get her perspective mainly as people hammering at wood). Grace reveals the Kingdom gradually, giving us, one after another, encounters with the various islands that make it up, each occupied by people with a different magical bent. The differences between these settings and their people are well realised, supporting the complex picture that Amora is gradually putting together of her world and of her family's place in it.
With its blend of magic, fantasy, romance and  politics, I think this book is bound to be popular and to lead many readers to enjoy the world and peoples of Visidia.
For more information about the book, see the publisher's website here.
Email ThisBlogThis!Share to TwitterShare to FacebookShare to Pinterest
Labels: coming of age, Fantasy, YA