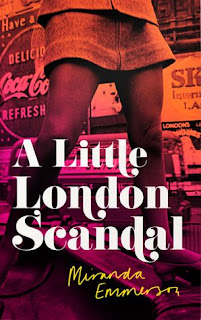 Snap verdict: A VERY welcome return to Swinging London - and to Anna Treadway.

In a followup to 2017's Miss Treadway and the Field of Stars, which saw theatrical dresser Anna Treadway investigates the disappearance of one of her actresses, A Little London Scandal picks up Anna's life  two years later in 1967 when she is standing up for a young man wrongly accused of murder. It's a hot summer ('The auditorium sweated as one - like some vast coach party packed into an Italianate sauna'). Working again with Sergeant Barnaby Hayes, now assigned to the Vice Squad, Anna is brought face to face with the seamier side of Swinging London: the shadows where sex, drugs and politics merge. There's a claustrophobic sense to much of the story, even the outdoor parts, a composite of smoke, sweat and the importance of looking the other way, of not seeing inconvenient things - whether breaches of the law or social convention, or the wretchedness of outsiders sleeping under bushes and selling themselves on the streets and in the clubs.

Anna's young friend Nik Christou is one of these outsiders. He's a rent boy, triply unlucky. First because he is in the wrong place at the wrong time. Secondly because he is obliged to make his living by selling himself to men on the streets of the West End, breaking the law and risking punishment for both him and his clients if caught (although wealth and status has a way of protecting its own). And finally, he is unlucky because he is in this situation due to abuse and neglect in his hometown of St Anne's, near Blackpool. The flashbacks explaining just what had happened to Nik are heartbreaking, showing a baffled, confused child let down by school and parents and simply left to sink or swim by his own efforts. And he's not about to get any help now from a police force that is corrupt, prejudiced and overly respectful of the wealthy and powerful ('we let the club have a quiet word with all the men to ask if they'd seen or heard anything').

Nik does, though, have a good and stouthearted friend in Anna Treadway. I loved the way that Emmerson portrays her: definitely "posh" despite her slightly shady past and humble job, deceptively meek in demeanour but ready to use her background mercilessly (for example to sweep into a police station and ask awkward questions, or to blag her way into the Dorchester). Watch how she's given short, hesitant, mild sentences which can seem almost excessively eager to please - but then reveals her sharp mind, steps ahead of everyone else and not afraid to deliver a devastating judgement.

Anna is missing her partner Aloysius ('Louis') Weathers who has returned to Jamaica to sort out an inheritance, and his absence from the story (apart from correspondence with Anna) does rather leave a hole, compared to Miss Treadway and the Field of Stars. In a sense, his not being at the centre of things is understandable - the earlier book looked at issues of race in 60s London, while A Little London Scandal explores the position of gay men, before the legal reforms later in the decade. So we see a familiar pattern of events as rising junior minister Richard Wallis is threatened with exposure, the News of the World raises its evil head, blackmail is whispered. The book explores the lives of the young men at the sharp end of all this, with an acute sense both of hypocrisy at every level ('Perhaps gentlemen's clubs are closets for the overly design-conscious...') and of the real damage being done to almost everyone involved by the secrecy and fear of exposure.

Caught up in the same events is Merrian, 'the Wallis wife' as she is introduced to us. She's in the impossible position both of knowing a great deal about her husband and at the same time of consciously "not knowing" about him. A generous and idealistic person herself, she's at an impasse and she doesn't know where to turn. I think that Emmerson is brilliant in the way she brings Merrian to life - her hopes and fears, background and love, all bound up in her history with Richard and her life with him now, which is turning out to be something quite different from what she thought.

Richard himself isn't a completely unsympathetic character. While I didn't like him, I could see him, too, as a victim and as someone who had made choices, gone a certain way, and found it quite different from what he expected. Which is probably true of all of us, but for a politician, expecting to be influential and make a difference, perhaps it's understandable that his sense of disillusion is greater than for the rest of us.

In a brilliant evocation of 60s London, Emmerson gives us the parties, the late night streetlife, the excitement of a society that feels on the cusp of something. Colour TV has arrived, with a group of friends planning to watch Wimbledon "in colour", but vegetables are still delivered to Covent Garden market by horse drawn cart and decanted into barrows and the area is still to gentrify. Emmerson also
gives us the darkness: violence, prejudice and hypocrisy centred on the impregnable clubs of Pall Mall. All against a vivid portrayal of the streets and villages making the city up ('Covent Garden for raspberries and carrots - even at five in the morning. Seven Dials for rags - shift dresses and corduroy skirts and a hundred shades of polyester blouse. Monmouth Street for coffee bars - so many coffee bars - musicians and actors and students lout on dates'). The book highlights the dilemma facing gay men under discriminatory laws and societal pressure (and in particular, actors): the constant fear that you'll be turned on, that people will stop looking the other way, the need to be so careful who you are honest with ("'Bloody hell,' Anna said. 'Apart from everything else, it's just so complicated.' 'Try living it,' Benji said softly...")

It's a deeply immersive book - often a very sad book, but one that compelled me to keep reading even where I knew that something bad was coming up. Like Merriam, you have to know the worst.

An excellent read. I hope that Emmerson gives us more of Anna Treadway, although - spoiler - by the end of this story she's left her flat above the Alabama Coffee House in Neal Street which is sad as that brought so much atmosphere to the stories.

For more information about A Little London Scandal, see the publisher's website here.