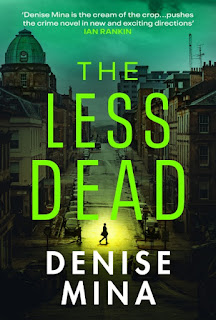 I'm grateful to the publisher for an advance e-copy of The Less Dead via NetGalley.

After the globetrotting of Conviction, Mina returns to home ground for this Glasgow-set mystery which links the very different cities of the 2020s (maybe I should now just say "20s" but that sounds like flappers and jazz) and the 1980s, digging up unfinished business and crashing all kinds of different worlds together - the comfortable professionals and the struggling poor, the settled families and those with chaotic lives. It's a book I really found hard to leave alone, gobbling chapter after chapter and neglecting my family and dogs. "Unputdownable" is an overused  cliché, but this book is the real thing.

The junction between all of the different worlds is Margo Dunlop, a middle-aged Glaswegian GP who - following the death of adoptive mother Janette - is searching for information about her birth mother, Susan. We first see her waiting nervously in the offices of an adoption charity, not helped by well-meaning but charmless social worker Tracey. When Susan's sister Nikki breezes in late, we see the first of those collisions. Margo's educated, professional. Nikki's... not. Laced through this book are Margo's (rather) dismal attempts to "accept" Nikki, to not be a snob, and the tendrils of guilt that grow from her failure to do this. The joke on Margo is that Nikki doesn't need to be "accepted", she has her own life which may seem a strange life to Margo but Nikki's OK with it.

It soon becomes clear that Margo herself has hit something of a crisis in her life and isn't as "settled" as she thinks. She's hard up, on long term sick leave, failing to to cope with her loss of Janette or her relationship with her ex, Joe (who seems a charming man, if you want someone to turn up at 2AM with a bike slung over his shoulder). She finds it hard dealing with Nikki ('She feels as if Nikki has stolen the day from her'). It's all symbolised by Margo's intermittent attempts to clear out Janette's old, rambling house - another collision of worlds, set in an area that's gentrifying very fast.

This is the background. We also soon meet Margo's oldest, best friend, Lilah, who's in a deeply unhealthy situation with her own stalkery ex, 'that wanker Richard', a situation that's spilling out into her group of friends ('It's messy and they've all been sucked into the collapsing star of Richard's and Lilah's relationship') and we hear of Margo's brother, Thomas, also adopted. Mina brings them to vivid life - Lilah's increasingly scary encounters with Richard, often staged in front of her girlfriends, Joe's baffled incomprehension that he's not with Margo any more, and especially, Margo's more and more frenzied displacement activity as she tries not to confront many and varied facets of her life. A diversion is just what's needed! And here we are! Margo discovers that Susan was murdered and the crime has never been solved. There are whispers of a police cover-up, that Susan was one of a string of murdered Glasgow sex workers. Here is a cause she can adopt, a problem she can solve, a way she can come into Nikki's life with some control.

Margo begins an investigation - partly into the crime, partly into Susan herself and her origins and background, partly into the Glasgow that killed here: that dark, 80s Glasgow of which traces still linger and which you can step into if you're lucky... or perhaps, if you're very unlucky. Nikki's something of a guide - she's an amazing character, a force of life, a survivor. But if you patronise her, look down on her, ignore her, you do it at your peril. And Margo will visit strange places even in familiar parts of the city ('She'd swear on her life that she has never, ever seen that pub before').

Other perils also walk these pages. Mina does something awkward, jarring, very creepy, but totally brilliant with the text. Alongside the Margo-narrator, there's another voice here, mostly staying in the shadows but sometimes stepping out to grab the story, steer it down dank paths strewn with a really unsettling vein of misogyny and hate. It'll happen in the middle of a sentence. For a few words you're not sure what's going on - then you know, yes, he's back. Those words correlate with a rather sinister game that increasingly draws Margo deep into that other Glasgow, the one that's supposed to be dead. I found it very very creepy and while - as I said above - you have to keep turning those pages, at times I also didn't want to, for fear of what I might read next. Denise Mina takes the gloves off in her depiction of male hatred for women: it's not only that other voice, we also see Richard become scarier and scarier (well, we hear about it - it's mostly reported second and third and hand, which somehow makes it even worse, like a news ticker scrolling with reports of chaos and violence).

The writing in The Less Dead is glorious - always on the nose, capturing an exact moment, feeling or scene. One character, swearing her head off, is nevertheless 'serious as a newsreader'. Another 'performs looking for a taxi' to try and repel a pack of rowdy men late one night.  The characterisation is also brilliant. Margo, as a GP, assesses Nikki. 'She doesn't have the sleepiness of a methadone user or the drowsy disgust of someone on valium.' Later, when she has to report a shocking crime, she notes that the police officer who responds is using the same verbal techniques for managing a stressful encounter as she's been taught herself ('eye contacting her half to death with training-course empathy'). Gradually, allusively, we learn about Margo's earlier life, her attempts to fit in (a consequence of adoption? Or just part of modern life?), her enjoyment of the privilege of being 'thin, young and white' and being able to sneer at those who weren't. Margo and Lilah's relationship at school in a nutshell: 'Slimness was suddenly a currency between them. They got thin at each other.'

We also hear about the attitudes of the respectable (police, social workers, journalists) to those in that other world - the drug users, the sex-workers - the judgments made, the failures of the police to protect the weak. Things were worse back in the 80s, we're told (when Margo delves into the newspaper archives for information, she 'feels as if she's reading in a language language she doesn't understand, as if she's eavesdropping on aggressively heterosexual Victorians... DEAD VICE GIRL'S FEAR OF STALKER') and the book is set up as an opposition between then and now, but as one character, an ex-DI who did her best, admits, things aren't much better, her best wasn't enough. The book seethes with loose ends, with second bests, missed chances.

And second chances too. Margo comes from a family - the Brodies - renowned for their bloody-mindedness, and if there's enough of them in her to get through all the dangers here, then perhaps she can begin to fix a few things. Perhaps.