Review - The Doors of Eden by Adrian Tchaikovsky 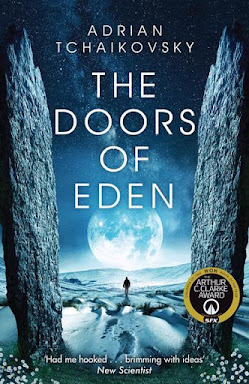 The Doors of Eden

I'm grateful to Macmillan for a free advance e-copy of The Doors of Eden via NetGalley.

Well, 2020 - whatever else - is turning out too be a cracker of a year for books. And for me, The Doors of Eden is one of its highlights so far.

How to describe it, though? Especially without strewing spoilers around? That's a very hard problem...

The Doors of Eden is a wonderful, classic, classy, piece of SFF, spinning its readers' heads with a host of parallel Earths in each of which evolution has proceeded differently. They're introduced by a scholarly writer, Professor Ruth Emerson of the University of California, whose opus, Other Edens: Speculative Evolution and Intelligence is frequently quoted. As Other Edens makes clear, this isn't just about minor changes to the timeline where things are a little different, it's about the points where different history gave us vastly different sentient life. The speculation supporting this is compelling, from the closer timelines - an Earth where Neanderthals survived but we didn't - to those rather different. An Earth overcrowded by hundreds of billions of rat/ weasel creatures. Worlds of intelligent fish or sentient silverfish or horseshoe crabs.

The Doors of Eden is also a compelling, believable and slick thriller, with plenty of intrigue and peril, initially following the attempts of an MI5 team comprising Julian Sabreur ('no young Sean Connery or even Roger Moore') and his analyst Alison Mitchell ('Matchbox') to foil an attempt by far Right thugs on the life of an ex GCHQ scientist, Dr Kay Amal Khan. We're soon in a world of hoodlums, shady "security" companies, well-connected financiers milking Government contracts. We may not be quite sure what's going on, but it's clear, in this part of the narrative, who's on the side of the devils: watch out for how they talk about Dr Khan, who's a transwoman - the villains reliably refer to her as "he" and there's a moment where this causes them enough operational confusion that she slips past their watchers. Dr Khan herself is a bit of a wildcard: one of the foremost world experts on... something, potentially available to either side as an asset but to what exact purpose?

The existence of these other Earths begins to be revealed when two young women, Lee (Lisa Pryor, short for Lisa Chandrapraisar) and Mal (short for Elsinore Mallory 'because she came from a particular social stratum where that was perfectly acceptable. However, she never forgave them for it') stumble into trouble on Dartmoor. Four years on from that terrifying event, Lee finds herself caught up in the machinations between MI5 and its opponents (there are several factions). The story of Lee and Mal is at one level a romance - we see Lee's sense of loss and confusion. Tchaikovsky is really, really good on the psychological impact on her of what happened: the pain, anger and guilt. The whole setup may be fantastical, but her reactions are deeply, convincingly real and they drive what she does through the book, for good and ill. (For that matter he's also really good on the little details of their relationship before The Thing that Happened, the ways they work each other out, understand each other, fox their families about what's really going on between. The way that Lee, missing Mal, was 'terrified that Mal would suddenly remember she was white and posh').

There is another romance here too, between Alison and Julian. Kind of: I wasn't actually clear whether it went anywhere, partly due to lots of that old-fashioned British reserve keeping them apart (though again, that seems to make things even more real). It's also partly due to the structure that Tchaikovsky adopts, one where there's a capability to see alternate outcomes so that words like "real" become moot. And partly, it's a delicacy to the writing which leaves us to imagine a lot - in the same way for example that detail of that Dartmoor episode, past a certain point, is left hazy. Far from diminishing the horror, this, combined with the car crash that Lee has made of her life only heightens the sense of terror and mystery.

What else does Tchaikovsky do well here?

How long have you got?

What about the way he vividly depicts his different societies - variously composed of birdlike creatures, rat-weasels, Neanderthals and many others. They all feel real, based on the real circumstances that gave rise to them, with communications, technology and culture (with the rat-weasels for example, status is all about claiming space in their crowded world, whether through bulky clothing or overpowering colognes).

What about the deft interweaving of the different strands of story - many of them seemingly contradictory (but you're in safe hands here, just go with the story)?

Or the shady, only hinted at, nexus of IT, quantum mechanics and Very Hard Maths that underlies events?

Or that certain type of privileged, entitled person, who, confronted with the very Apocalypse itself, plans primarily to make themselves some gain at everyone else's expense. (A repellent characters done very well, this one).

I'd have to say though that for me, the aspect of this book I found most beguiling was the sheer mastery and even beauty of the prose. There are so many examples I could quote. It's smart ('she had borrowed hope at a ruinous interest rate'), often funny, sharply observed. It's never less than engaging, frequently compelling and, in some moments, simply brilliant. There are allusions to classic SF (motes in a god's eye, the stars beginning to go out, an on-point Doctor Who reference to The Girl who Stayed and The Girl Who Came Back) and a general sense of playing with genre, trying on metaphors from role playing games, films ('It's a million to one long shot, and only these two desperate lesbians can save the world') and meme, a book that injects a sense of fun even into the darkest moments ('not that you ever need an excuse to slap a fascist').

This is a book to immerse oneself in, to live and breathe, not just to read.

It's one I'd strongly recommend.

For more information about the book, see the Macmillan website here.