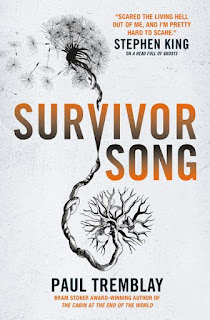 I'm grateful to Titan for a free advance e-copy of Survivor Song via Netgalley.

In an alternative USA, a deadly virus spreads, overwhelming the hospitals, bringing normal life to a halt and prompting bizarre conspiracy and origin theories.

No, this isn't covid-19, although Tremblay's timing is spooky. Rather it's an aggressive mutation of rabies. Aggressive both in being super-contagious, and very quick to take hold. Within hours of being bitten or otherwise exposed, victims becomes irrational, frenzied and dangerous. Tremblay cleverly gives us the bones of the zombie story - but in a plausible and rational version of the world. The story then follows several hours in the lives of two women as they struggle to make their way though a familiar city that's suddenly become a post-apocalyptic landscape.

A comparison with the current pandemic is the most obvious point to make about this book, and Tremblay is definitely on the knuckle here. Witness his portrayal of doctors and nurses struggling to respond without adequate PPE and without knowing exactly how the virus behaves or what it may or may not do, unclear rules ('last night there was confusion as to whether turning off the light was a recommendation or if it was a requirement in accordance with the government-mandated curfew'), the behaviour of 'doubters, naysayers and the most cynical political opportunists' - and a 'Jackass president'.

However, that would only be the most superficial analysis. There's a lot more happening. The bulk of the story is about two amazing young women, paediatrician Ramola Sherman and her eight-months pregnant friend Natalie - who needs to get to hospital fast. "Rams" is British, born in South Shields with a mother who emigrated from Mumbai as a child, and a white father - she is therefore an object of double suspicion to the paranoid militias which have taken to the streets. "Nats", her college friend, is in deep trouble - her husband lost to the virus, her child coming along and about to be born in a world that's all gone to pieces. The relationship between the two is well drawn, funny but also moving and - at times - downright heartbreaking.

Tremblay is matter-of-fact about the fact that Nats is suffering mood swings: 'The earlier muting of her personality has swung one hundred eighty degrees into manic levels of Natalie. is this how she is coping?' - the question being, or is it something else? Ramola is fearless and resourceful, whether begging help from strangers, working the medical system or figuring out what to do next in an increasingly constrained series of desperate moves through a landscape gone to Hell where humans, animals, the authorities may all be a threat (Natalie's so short on time that a traffic jam blocking the way to a besieged hospital may be enough to cause a fatal delay).

It's a story heavy on action, a chase from one danger and into another as hospitals fail, roads are blocked and law breaks down. But it's told with delicacy and even moments of beauty - leaves fall '...whirling in invisible eddies... until they land, as they must, and join the autumnal mob usurping the shoulders of the road'; a young police officer stands 'as tall as a folktale' and Nats' and Rams' odyssey intersects with other sad lives, in particular allowing a deeply affecting portrayal of two young men, Josh and Luis, living their lives on the margins. They believe, perhaps, that the outbreak is their time to shine, to be the heroes of the movie. They're wrong ('Luis thinks that the dimming or leaking away of who you are is the worst thing that can happen to anyone') and indeed, one of the ideas examined mercilessly here is the tendency in real life to see events such as this through the lens of a film or TV miniseries or, indeed, a fairytale. Nevertheless, the two get a moment that is 'them at their best' and an opportunity to do the right thing.

This is not, Tremblay tells us several times, a fairytale, and his roundup of what happens after ('The virus doesn't herald the end of the world... [but] emergency services... will be stretched to their breaking points, exacerbated by the wily antagonists of fear, panic, misinformation... a president unwilling and woefully unequipped to make the rational, science-based decisions necessary...') may perhaps be taken as a description of the real world, as much as of a story, at least in an optimistic case.

It's a totally gripping novel, actually taking place over the course of a few hours and best read in one go, allowing the reader to be taken over by the sense of urgency and peril here. A horror story where the general setup may feel familiar from fiction but the detail is painfully credible and true to life. I'd recommend.