Review - Were We Awake? Stories by LM Brown 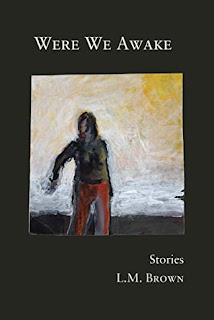 I'm grateful to the author for a free e-copy of these stories to consider for review.

Were We Awake follows Brown's previous collection Treading the Uneven Road (which I reviewed here). Again, many are set in the same world, and town in Ireland and feature many common characters and themes. Like that book, a few are also set in elsewhere, particularly in Boston. We see some remembered events but from different perspectives. Indeed perspective is a theme here - we see people who presumed themselves and their lives to be central to their own "stories" reminded that they are also on the margins of others' stories: the way that the wider reality of Brown's imagined world is conveyed as separate stories says something about the nature of her characters' experience

In the first story, Communion, for example, for two young boys, Raymond and Alby an afternoon in school is disrupted when silence falls over the nearby quarry, and sirens are heard. This story describes an event we've already heard about in Brown's stories but from a new perspective and it captures that sense you can have in childhood of knowing that momentous, dreadful things have happened while still wanting your tea and to play with a friend. The story adds something to what we already know from Treading the Uneven Road and in doing that casts some of the experiences in that book in a rather different light.

In Hidden, a young woman waits to see if she will be offered a place at college - which will mean leaving her parents Evelyn and Lorcan and her aunt Bevin who share a house on the shore. (Evelyn and Hazel appear briefly in "The Accident"). Cleverly, what seems to be the centre of the story, a moment of growing-up for Hazel, is turned upside down by a discovery. I loved that way that Hazel's reaction to that discovery undermines her supposed maturity and also upends what one might have thought the centre of the story was.

Flight returns to Raymond from Communion as a young man, living with his mother and employed by his uncle as a rent collector on the estate. Raymond senses that there's something unexplained about his father's death (a mystery that was explained in Treading the Uneven Road) but, unable to get answers, he focuses instead on the lives of the tenants, a sphere of life where he has some power. I enjoyed the juxtaposition. In Communion, we have just seen a horrific event from Alby's perspective, here in "Flight", some ten or fifteen years later, Raymond, closer to it, is apparently unperturbed. He can't really remember his Da, whose loss has become more of an intellectual puzzle, and he's unable to solve even that.

The Clown Prince opens as Alexander, a clown struggling to support his family, puts on his make-up, The Clown Prince is pregnant with alternatives, possibilities, things not said - going back to the very roots of his and his wife's marriage. I felt there was more lurking here than is spoken - that identities are in question, patience running low, doubts bubbling.

Walking a Country Road is a tense, almost claustrophobic story concerning a couple who moved back to Sligo from London and then divorced. Brown slowly unreels the layers, from the perspective of their daughter Leanne who feels constrained by being named for her father's dead - murdered - sister. There are powerful currents of guilt, mistakes being made to atone for past mistakes in a relationship between the three that seems wrong from all directions. Very powerful.

What It Is To be Empty-Handed is set in the US, the protagonist - a 14 year old girl - narrating how she travels with her mother from one dingy lodging or motel to another, never attending school but being notionally homeschooled. Now "Debra" is insisting on being called that, rather than "Mom" - and as the story is spilled, as the narrator is plied with drink by an older man one evening, we begin to see the dislocation that explains that. This was a truly chilling and despairing story.

Crashing gives us a very interior-focussed narrative. Catherine is worked to a frazzle between the selfish demands of two bone idle men, her husband Dermot (whose likes his eggs done a very particular way, and whose latest imposition is a new dog, which of course she has to look after) and her son whose house several miles away she cleans weekly. (He sulks if she doesn't also provide home cooking at the drop of a hat). The reader may have been hoping that Catherine would snap and tell these two that they need to pull their socks up. Emotionally satisfying as that might have been, something rather more awful, rather more interesting, happens, more devastating but which does, eventually, give her an opportunity to connect with someone who isn't just trying to set her to work for them. My favourite story in this book.

Cold Spell is also a US-based story, another close, interior two-hander featuring a husband and wife whose marriage seems to have been afflicted by a, well, cold spell to match the Arctic weather currently bearing down. Again the husband is an unaware, selfish person who can't, or won't be bothered to, read the forecast (as it were). There are only so many ways this might play out and I sort of guessed the ending. It's a neat, self contained piece.

Confession is the first of three closely linked stories (with Anniversaries and Games They Played) revolving round a murder that takes place late one night behind the Dun Maeve pub. The victim is a local man, Nick, with a wife and children but the event also costs Nollaig her daughter - barmaid Margaret was working late that night and can't bear to remain in the village afterwards, thinking of what happene. Confession follows her to Sydney, while Anniversaries looks at Nollaig's life back at home, at her friendship with Raymond's mother and what the yearly reminder at Mass of the death does to her life as her daughter seems to recede further and further into the past.

Games They Played takes a different perspective, going back to the immediate aftermath and looking at the dead man, Nick's, wife Joan. Like many of the stories in Were We Awake, a few pages displace what we thought we know, and shows things as quite different. Without diminishing or contradicting what Margaret and Nollaig have gone through, the picture is completed and we see other relationships that were central to these events.

Taking Too Many Chances and Green Balloons are two further stories set in the USA. In the first a husband and wife, at odds and in financial trouble, take a holiday which brings some of them into danger. But they only really understand how much, and what, afterwards.

Green Balloons is a tender little story about two young women who, for a time, are able to ease each others' pain. But only for a time. It's a sad, sad story which tells so much in just a few pages.

All the stories here share this: the property of saying so much. While those that share the deeper background of Treading the Uneven Road have an advantage here - they can build on and echo the world already established - all of them do this, creating real characters in real situations and showing things from multiple directions.

Overall, it's a strong collection which I enjoyed reading and can recommend without reservation.