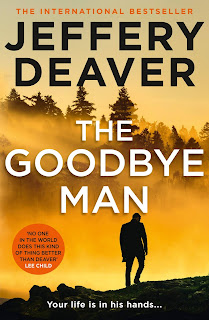 I'm grateful to Anne at Random Things Tours and to the publisher for an advance copy of The Goodbye Man to consider for review and for inviting me to take part in the tour.

This is the second Colter Shaw thriller. If you haven't read the first, The Never Game, I'd advise you do that before reading The Goodby Man - it will make more sense, and also, spoilers.

I will say right away that Deaver really caught me off guard with this one. I thought I knew what to expect from this series Colter Shaw, who travels the USA in his camper van, investigating disappearances for reward, would roll into town, encounter a mystery, and solve it (while making a little progress, on the side, in the matter of his father's murder). There would be clues, also trails and heart pumping finale.

And so it seems to begin, as we discover the town of Gig Harbour, where two young men are wanted for a racist hate crime.  A reward has been offered and Shaw - fresh from San Franciso and the events of The Never Game - is soon on the trail. However, things then take a strange twist. Unsettled when the pursuit goes dramatically wrong, and seeking answers, he heads in a different direction - infiltrating a reclusive self-help group, the Foundation, and encountering its charismatic leader, Master Eli.

That results in a very different book, both in tone and pacing, than The Never Game. Rather than acting like a detective, as in the previous book, Shaw's success (and survival) will depend on his ability to act a part, remain undercover, and ferret out what's really going on - without any standing to be asking questions or poking around, and with no access to outside resources either to aid the investigation or to back him up if things go wrong. That takes Shaw some way out of his comfort zone and I think possibly the same may be true for some readers if they were expecting a trail of clues and red herrings - as in The Never Game or for example the crimes investigated by Lincoln Rhyme. But stick around, this is rather good!

For me the really audacious thing about the story is I think that Shaw isn't as good at this as he thinks. We've previously seen him shrewdly calculating the odds and he still does that when it comes to a fight, to eluding pursuit in the woods or breaking into a locked office. But the approach is little use in a setting where others make the rules and Shaw is as clueless about what's going to happen (and as obliged to do as he's told) as any other "Novice". Watching him discover that and - Shaw being Shaw - try to apply his father's survivalist wisdom to it - is fascinating, if unexpected.

Also fascinating is what happens when the Foundation's touchy-feely counselling technique, "The Process (tm)", bumps up against Shaw's tortured life history. I enjoyed seeing him squirm as rather too much is revealed, and it would be fun to let this go further - I find Shaw an interesting character with a vividly realised, and completely weird, backstory (the death of his father and disappearance of his brother, the obsession of the latter with some plot or secret that apparently got him killed). The flashbacks in The Never Game suggested all this has left a deep wound and I wondered how far the Foundation might open it up. Maybe in future books Deaver will go further.

If that suggests The Goodbye Man is more of a people-y book, that's true, with the dynamics of what goes on at Snoqualmie very much driven by individuals, their character and their pyschology. At the centre is Master Eli, a narcissistic and deeply unpleasant Messiah whose rhetoric was eerily familiar ('...got a business degree form one of the best colleges in the country, graduated at the top of my class. Summa cum laude. I started companies, a dozen of them. They all did great. I made a ton of money, hired a ton of employees. Successful!All my companies. They were perfect, they were gorgeous!') The book is at one level a fascinating study of how such an individual may bend intelligent, successful people to his will (and as Deaver shows in his reading list at the end, he's done his research on this).

That's not to say that The Goodbye Man lacks action - there's plenty of that, and it certainly delivers the blood-pumping finale I'd expected, while driving Shaw forward on his personal quest.

I should warn that there is a theme here of suicide and Shaw - being Shaw - at one stage is rather judgemental about this. He does though come good in the end.

All in all I enjoyed this this book immensely and it left me very, very curious about where things will go next - both Shaw's own search for justice and answers and what sort of story Deaver will give us. One thing I'm certain of is that it won't be what we expect!

For more information about the book and author, see the publisher's website here and the author's site here.

Even in the current difficult circumstances, many local highstreet bookshops are still operating by mail order, and they need your support. Alternatively, online, Hive Books supports local shops. Or you can order from Blackwell's, Foyles, Waterstones, WH Smith or Amazon, to mention just a few.

There have been some cracking posts already - and more still to come! See the poster below for details. 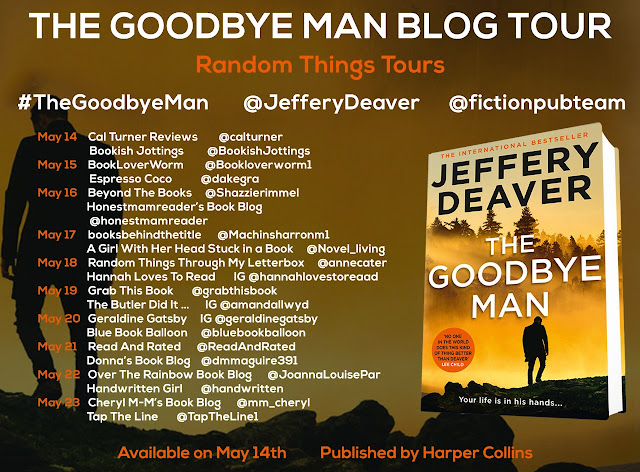