#Blogtour #Review - The Creak on the Stairs by Eva Björg Ægisdóttir 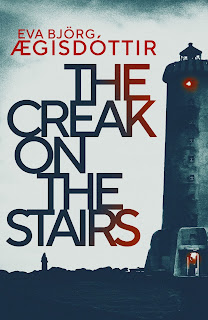 I'm grateful to Orenda Books and to Anne Cater of Random Things Through my Letterbox for an advance copy of The Creak on the Stairs to consider for review, and for inviting me to take part in the tour. I've been watching the blog tour stops  come along and have been impatient to have my say about this this book - it is a book that makes an impression.

There is a moment in The Creak on the Stairs when Elma, the detective investigating the death of Elísabet Hölludóttir, happens upon a school yearbook photo. In the background is a young girl - eight or nine years old - who's drawn a picture which Elma interprets as a cry for help from a position of abuse and despair. That cry, made decades earlier, has been unheard, ignored - until now. It stands for the events of this book: distress, torment, hidden in plain sight in a little town where - as we are told many times - everyone knows everyone else's businesses. But nobody acts.

A central theme here is Elma's uncovering of Elísabet's early life. A successful pilot with a husband and two kids, Elísabet is found dead one evening on the rocks below an abandoned lighthouse. Nobody can understand why she is in the town of Akranes at all and it falls to Elma to explore who she was. A great deal of what Elma finds doesn't seem to be relevant to the enquiry or threatens scandal to prominent members of the tight-knit community and her boss, Hörður, becomes impatient - or perhaps nervous is the word - at what may come out. At the same time, Elma herself is grieving after a bad break-up (the reason she has returned to her hometown). She is especially raw and what she finds out will hit her hard.

I liked Elma - her tenacity, her chaotic life and the palpable feeling that comes off (never I think articulated I so many words) that she's somehow failed, landed back where she began after a successful life in Reykjavik but that nevertheless she's still here and is going to look the town in the face. She's obviously hurting, but she won't back down.

Accompanying Elma's, and her colleagues', investigation, we have short sections of story between 1989 and 1992, narrating painful things which underlie present day events. These are dark passages, hinting at abuse and neglect (although, to one clear, there are no explicit descriptions here) and they hold the key to more than one mystery. They also highlight that somebody - a teacher, a neighbour - should have read the signs and worked out what was going on (in a town where, as we have seen everybody knows everybody's business). That nothing was done is a charge hanging over the townsfolk, a charge that's never, quite put into words but is still there: an accusation, a verdict

In what is actually in the end a pretty scorching condemnation of smugness and small-town complacency it's Elma who brings some perspective: having come back, as Elísabet did, she perhaps has a wider perspective. The book is a slow burner with a gathering sense of outrage and it has a ferocious ending that totally wrong-footed me - and left me eager for more from Ægisdóttir.

Victoria Cribb's translation is smooth and lucid, the book flowing well and the reader having a great sense of immediacy, of being told the story directly.

And the tour's not done yet - as I said, there have already been some splendid reviews and other pieces, and lots more still to come - see the poster below! 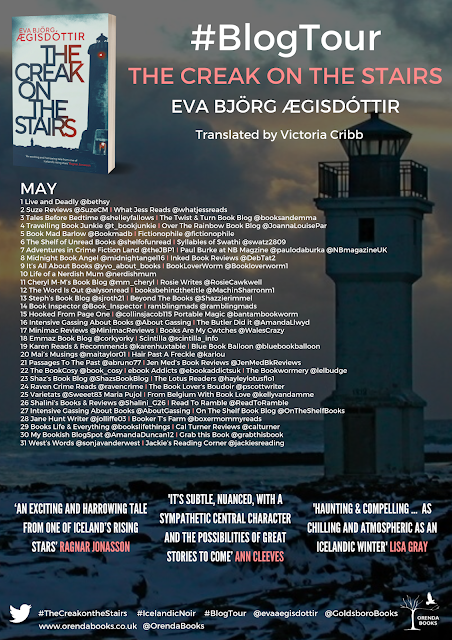 For more information about the book, and for links to buy it as paperback or e-book, see the publisher's website here.