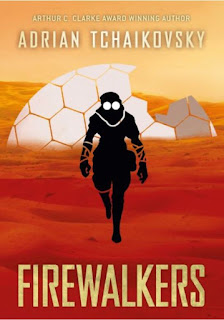 Nguyēn Sun Mao is a firewalker, that is, a fixer who, with a trusted crew, will venture out into the withering heat of near future, global-heating afflicted tropical Africa to mend tech.

The little community he lives in - Ankara Achouka - owes its existence to a rich-person project to escape the heat and death. Ankara it, literally, the site of the Anchor (or one of them), the foot of a space elevator that serves the building starship Grand Celeste. Workers were gathered from around the world ('There'd been plenty out of Vietnam who'd needed somewhere that wasn't underwater right about them') to construct it, repopulating zones previously abandoned as the temperature rose.

Scattered around in the desiccated countryside are the abandoned villa estates of the monied who got together to fund escalator and starship, the labs and research stations where it was designed, and square kilometres of solar panels to power everything. It's all pretty much abandoned now as the last few passengers drive, stay briefly in Ankara and make their way to their berths. Mao and his ilk scratch out a bare living keeping those panels running to serve the hotel and town, and fixing this and that.

Of course, this book involves a trip out of town into the heat and into danger, a trip that will change things for ever...

Tchaikovsky packs a great deal into this short book. There's the closely observed relationship between Mao and his team - Lupé, who 'just liked the feel of the metal under her fingers', Hotep, 'the space girl', a young woman expelled from the Celeste because she didn't fit in ('She laughed at the wrong times, cried at the wrong things, took the wrong message from jokes,,,') - one of the elite, born, in her view, to be an astronaut, but now to be left behind, she's an ambiguous figure ('she had a right to be mad, maybe, but that didn't make her the avenging champion of the world either'), which is reflected in the way everyone around her behaves.

There are heartbreaking, truly fearful descriptions of the ruin of Earth, the dry river beds, dusty plains and long-gone animals and and trees (trees are now just something strange you see in old pictures- were they ever real?) The repellant, processed food. And, everywhere, the legacy of the rich who, rather than try to fix things, squandered resources on building themselves an escape route.

It is a really grim vision, but in these times of one rule for the powerful, one for the rest of us, it hardly takes much persuasion that these might be the consequences, this might come true.

There is, also, of course, a mystery driving events here. Just what's causing the power drops that Mao is sent out to fix? The job takes him and the team way, way out into the badlands, to areas rumour populates with the strange, dangerous relics of experiments, where possibly labs still run on auto, tampering with who knows what. Mao is chosen for having survived one nightmare trip already but this time he faces different challenges.

There is some beautiful (and clever!) writing here ('the libido faction in Mao's personal government tabled a motion', 'They were heading for the Heart of Brightness', a sun 'the head of a white hot rivet just driven in by some celestial smith'). I loved the way that Mao's, and his crew's, expectation of the ruined, abandoned villas they discover, and the civilisation they represented, is all mediated through popular dramas which themselves don't comprehend what they're portraying, or the grimly realistic cultural attitudes embedded in the text, exposed when Lupé finds a working mirror screen that, to flatter, smooths the blemishes from her skin - and renders it 'a good few shades lighter'.

While there's a SF core to the novel in its background of climate disaster, space travel and future tech, the events are all driven by the consequences of flawed humanity as we know it and can see it today. There's no redeeming hero trying to fix things, indeed from what we see of the powerful here they're all about to begin a scramble over each other for escape, leaving Mao and his like to wither in the heat.

Which is what makes it - despite the temperatures experienced by Mao and Co! - still a chilling read. It's a book I'd recommend, as temperature records fall and we hear talk of colonies on Mars which, I'm sure, won't be for you and me...

For more information about the book, see the publisher's website here.
Email ThisBlogThis!Share to TwitterShare to FacebookShare to Pinterest
Labels: 2020, Africa, cli-fi, SF