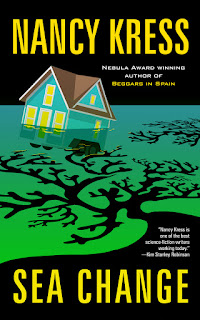 I'm grateful to Tachyon for providing me with an advance e-copy of Sea Change.

In a near-future USA, beset by economic difficulties and climate collapse, Renata is an agent for a mysterious opposition group, the Org. Seeing the Org's identification mark - a particular shade of paint - on a vehicle, she steps in to handle what may be a major breach in security.

The fact that the "vehicle" is a self-propelled GPS guided house makes the opening sentence ('The house was clearly lost') one of the weirdest I've recently come across. That is, though, the only fantastical aspect to this deeply convincing fable. As we get deeper into Renata's - she is the narrator of the story - life, we learn about the catastrophe that has ruined the US: basically a bit of GM-gone -wrong. The explanation of that is wholly convincing, as also the political consequences (a drastic turn against GM, meaning that Renata's "rebel" group is pro GM and determined to do it right, against the desire of most of the population. Their agenda is to combat rising sea levels, temperatures and hunger. In age when 'anything can be hacked' they operate like spies from the 1940s, all dead letter boxes, recognition signs and absolutely no tech.

That was quite a lot for me to swallow, being instinctively suspicious of GM technology, but that didn't prove a barrier to falling into, and enjoying, this book. There is so much here to enjoy. Wrapped up with Kress's story of how the world went bad there's a tender, infuriating, on-off love story between Renata and her ex-husband Jake, an actor: Kress really captures that can't-be-together, can't-be-apart thing that haunts some couples (in one place, early in the chronology, Renata compares Jake to Richard Burton: fateful, given his and Elizabeth Taylor's stormy relationship).

There's a narrative of Native rights (or perhaps I should say wrongs) - Renata's cover identity, protecting her as a courier for the Org, as as a lawyer taking large pro-bone cases for Native Americans and through her voice Kress narrates the legal bind in which they find themselves when seeking justice (whether defending themselves or prosecuting those from outside who wrong them). There's also a tragic strand about a young boy whose death is tied up with the environmental themes heres.

It's a lot to  pack into 192 pages and that inevitably means there are places where the narration has to fill us in on those legal niceties, or a decade of economic turmoil, or the highs and lows of Renata's and Jake's relationship. Yet the narrative drive and the interest never flag, and there's a genuine sense of jeopardy here right till the last page - as well as a mystery concerning Renata's cell in the Org.

The book also has some sharp writing and insights. 'Minutes snailed by', for example, or 'Childhood doesn't really end until both your parents die' or 'It isn't the past that creates the future. It's how you interpret the past.' Or - and getting his back to the point - 'Anyone who would trust online celebrity sites would believe in leprechauns, elves and the wholesomeness of high-fructose corn syrup'.

All in all a plausible future, credible, relatable characters and a great deal to think about in this one. I'd strongly recommend.

(And - a coincidence, this, only affecting me - until last month I'd never heard of the Snoqualmie Pass but I've now read two books, in as many weeks that mentioned it. Weird or what?)

For more information about this book, see the publisher's website here. You can also buy it there or from Blackwell's from Amazon UK or Amazon US (sorry, I couldn't find on the other usual sites).