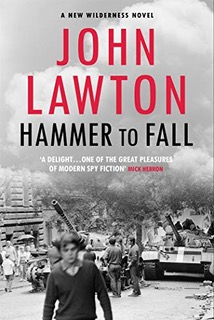 I'm honoured to be starting off the blog tour for Hammer to Fall, the new thriller from John Lawton (and grateful to Ayo for inviting me to take part and providing a free advance e-copy of the book).

This is the third book in Lawton's sequence featuring their, rogue and spy Joe Holderness (nickname Wilderness) and for a bonus it also includes (Frederick) Troy about whom Lawton has written rather more books. I enjoy the "shared universe" of these books and characters and the way that Lawton dots backwards and forwards, intersecting with previously established storylines (this one covers events in 1948, 1955 and 1966-68).

As we open, Wilderness is based in West Berlin, notionally and RAF Sergeant but actually up to something spooky. This work seems to leave him with plenty of free time for petty larceny and smuggling and he's part of an established band of "Schiebers", minor crooks, smugglers, and forgers who basically supply what the East German Communist regime can't. This involves contact with their opposites in the NKVD who are just as corrupt. Lawton paints a fascinating picture where amidst the nascent Cold War, such behaviour is simply a fact of life. The accent is very much on the individual, on the minor misdemeanours rather than everything having Consequences with a capital "C". That contrasts with the high stakes in the world of say George Smiley where one feels that an MI6 operative known by the opposition to be smuggling would immediately be blackmailed, turned and end up dishing out secrets from the top of the Service.

Consequently things here are very morally ambiguous and the implications of what's happening very subtle indeed. Nor is the sense of freewheeling, conniving spidery confined to the immediate post War years. In the main party of the book, Wilderness finds himself posted as a punishment to Finland where he has to pretend to be a Cultural Attaché showing British films in remote, draughty village halls. Bored out of his mind, he rapidly becomes involved in a local racket alongside an investigation in to a potential real bit of spycraft. The heart of the story is, though, always on Wilderness as a person, the effect on him of years spent in dubious undercover schemes while his young daughters grow up without him in London, and on where this may lead (an example is given of an old spy living a only life in Dublin).

The third act of this book takes us to the Prague Spring, where, naturally, British Intelligence is very interested in the goings-on and there is a reunion of sorts of Wilderness and his old crew. (Of sorts...) Lawton is very good, I think, on the dynamics of those months, on how the internal struggles would have looked to a close observer and on the reactions of ordinary citizens. The writing here has to strike a balance between a convincing, engaging plot giving agency to characters we've come to know and understand and the need to narrate the history they are experiencing as though it were in doubt - history which may be bent a little, but can't be fundamentally changed. Lawton does this pretty well - we do get a certain amount of narration, with Embassy cables recounting key events and moving things forward, but we also get Wilderness (and others) pursuing their (sometimes shady) objectives below the radar, as it were, with a genuine doubt about how everything will come to a climax.

In the meantime there are the (to me, ever fascinating) tropes of spy fiction - living a cover, clandestine meetings with contacts, the danger of betrayal, even, in flashback, a scene as agents are exchanged on a bridge in Berlin at midnight. And behind it all there is, quite properly, the human factor. When all the plans are made, all the fall-backs imagined and the risks assessed, what will the thing be that nobody saw but which rewrites the story? The boredom of an agent leading to unwise mischief? The inability, after carrying years of guilt, to harden the heart and kill at the needed moment?  The inability, after years of fear and stress, to trust at the needed moment? The bureaucratic blunder? The key failure of operational security?

The conclusion is truly nailbiting. There is, as Lawton notes, a sense of an ending here - but how will it come?

(That's not, by the way, the only allusion to a book, film or song I saw here - 'It was a looking-glass war from which few returned', 'I met my old lover on the street last night' - with its unstated refrain).

This was an enjoyable, gripping read, a more people-centred espionage story in which the central question is less, what are "they" up to, but, how can we (all of us, both sides) survive this business with something, some of ourselves, intact? Lawton draws his characters generously and he has a way with the telling phrase ('It would be a one-horse town if somebody happened to ride in', 'little Berlin Walls of the skull', 'Not designed to make you feel at home, but to make you feel there was no such place as home', 'It was hard to make new friends. So he didn't try.') There is atmosphere in spades, and the pages on my e-reader flew by. I'd recommend.

There are more stops to come on this tour - see the poster below and do, please, follow all of them. 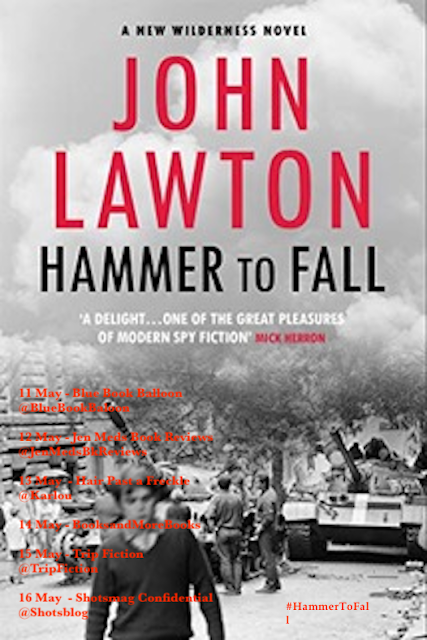