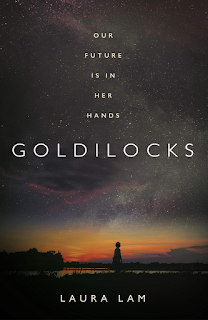 I'm grateful to Anne Cater of Random Things Tours and to the publisher for an advance copy of Goldilocks to consider for review and for inviting me to take part in the tour.

I'm sure it's happened to you, that moment when you pick up and read a book that seems so immediate, so relevant, so spookily prescient that you wonder off the author didn't, actually, have access to a time machine.

Well Goldilocks is one such book. Set against a background of environmental devastation - ravaged forests, rising seas, fires and pollution - Lam also gives us a creeping epidemic of misoyny, with women being progressively forced out of the workplace, stripped of their rights and generally written out of the script. All cheered on and celebrated by an incompetent, loudmouth US President.

And then, she throws in a novel virus sweeping the Earth... no, I'm sure this was written before the Days of Covid, but I do seem to smell advance info.

All this is really just the background. It explains why a crew of five female astronauts - Valerie, Naomi, Hixon, Hart and Lebedev - have been rejected for the upcoming mission to scout out a new habitable planet which may save humankind. Rejected, in favour of a back-up crew of men.

It explains why they don't accept this and mount a daring raid, aiming to scoop prototype starship Atalanta from NASA's control and set off for the planet known as Cavendish.

And it explains the fury unleashed on them by governments, media and social media know-alls.

But there's more to the book than that. Lam draws out a rich emotional history between, especially, Valeria and Naomi. Naomi is Valerie's ward and the two (and Naomi's stepbrother Evan) have sparred for years. Valeria is driven,  indeed she is the inspiration behind the Cavendish project but she doesn't;t suffer fools and she doesn't brook opposition. Don't be misled by comparisons to The Martian - this book is about much more than some women surviving in space. A closer analogy might be Simon Mordern's One Way in which we have that survival strand but it's not just survival in a hostile universe but also survival in the face of the darkness of humanity. You can fix faltering ship systems (but oh, what a dilemma that throws up) or sort out the food supply but those men back on Earth are still not prepared to give up their shiny toys.

And when that begins to put strain on the unity of the crew - a crew which needs, above all, to remain united - well that threatens them all, and all of humanity, which is after all depending on this mission (even if it doesn't;t know that).

I loved the way that Lam sets this situation up as a plausible, organic outgrowth of character and of everyone's history. We are given vignettes of Naomi's and Valerie's earlier life, slowly painting the reality of their relationship. Lam takes her time here and at first I wanted the story to move a bit quicker, following the later timeline of the Atalanta's voyage, but have patience, there are nuances here and successive layers of revelation and truth which bear a slow unravelling. Not least, because we need to grow to like and understand Naomi and Valerie for the novel to have its full effect.

The other book I see Goldilocks compared to is, not surprisingly, The Handmaid's Tale in its depiction of a future, dystopian, misogynist society. The transition to that is portrayed here as being much more gradual, more subtle, than in Atwood's novel and in a sense that's much more chilling; it's also of course chilling because it echoes current developments rather accurately.

But really, Goldilocks (the name refers to the zone around a star - neither too hot, neither too cold - in which life may develop; also, perhaps, to someone having an interloper take over their chair, bed and porridge) is its own book, a bold and absorbing story that was very different from anything I'd read before and one which I'd enthusiastically recommend.

It's almost the end of the tour but there is another stop tomorrow and an impressive number of contributions before - look at the poster!

For more info about the book, see the publisher's website here.

To buy Goldilocks - you should buy it - do try your local bookshop. Many are operating mail order and they really need your support right now. Online alternatives are available: over the past few weeks I've found it useful to check several sites and I would recommend Hive Books, Blackwell's, Foyle's, Waterstones and of course Amazon. 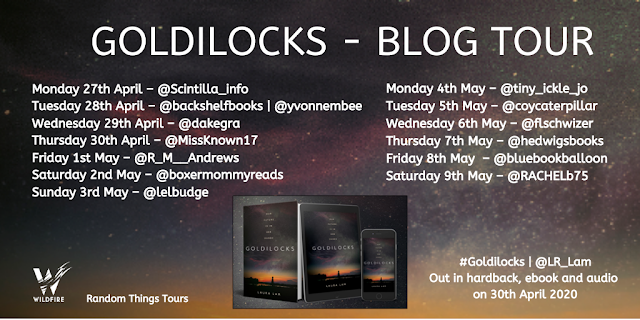