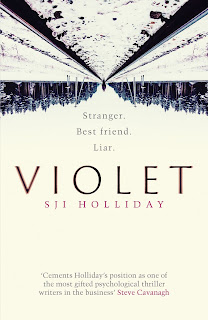 Today, I'm rounding off the blogtour for Violet, the tense new psychological thriller by SJI Holliday whose previous book The Lingering told of supernatural horror among a cultish group living in an abandoned asylum (and to which there's a bit of a callback here). I'm grateful to Orenda Books for a free copy of Violet for review and to Anne Cater of Random Things Tours for inviting me to take part.

This is a story of two young women. Violet walked out on her boyfriend Sam, leaving him in Vietnam and travelling to Beijing to find something better (but losing half her luggage en route). It seems Sam just wasn't the man she thought he was...

Carrie set out on the holiday of a lifetime - but without her best friend Laura, who was going to come with her. Laura had an unfortunate accident back in Edinburgh involving drink, cobblestones and high heels and is currently immobilised as a result. So Laura has spare tickets for a rail trip back through Mongolia and Siberia to Moscow.

When the two meet in a Beijing hotel lobby, where Violet is stranded having just missed the opening hours of the booking office it therefore sounds like fate. The two go off and get drunk, and their problems are solved. What could possibly go wrong?

Well, as you can imagine, quite a lot. Once these two apparently straightforward women are thrown together in a small sleeping compartment, it becomes clear that they both have complicated histories. And complicated secrets. The themes of strangers on a train, of the claustrophobic, isolated space of the sleeping car, the endless days crossing a bleak landscape, may seem very well worn - but Holliday is here now to inject new life and menace into them.

The story is told mostly from Violet's perspective, but interspersed by emails between Carrie and her family and friends. We soon begin to see that there's something... off... about Violet. She has, we are told, had 'many looks' and it may be time to try a new one. This feels a bit more like a fashion choice. Hearing Violet's internal monologue, we're aware of her latching on to Carrie. Carrie could be what Violet needs, muses Violet (even as she obsessively stalks her ex on Facebook). But Violet has to be careful. Just what is her game? Is she sponging off Carrie? Certainly Violet (still missing her luggage) ends up wearing items of Carrie's clothing which Carrie can't remember lending her. But they are drinking rather a lot so perhaps things get missed...

So it continues until the two stop off in Mongolia for shopping, an encounter with wild horses and, eventually, an allegedly indigenous religious ceremony that seems to be a cover for consumption of potent mushrooms leadings to an experience we are never, quite, told the details of. Whatever, it seems to reset the relationship between Violet and Carrie (and to put Carrie's behaviour in a rather different light).

After this, things get complicated between the two and the enclosed atmosphere of the train even more chaffing. There's nowhere to go. There's a dependency between the women but at the same time a hostility. Is it a case of grifter and mark? Seducer and seduced? Are they both playing each other, using one another? Jealousy also rears its head. Different levels, different layers of need, of abuse, of deceit, surface. If this were a film there would be many scenes of uneasy silence, of watching, of glances intercepted. It gets

intense, the journey being soaked in an atmosphere of palpable menace and, yes, even of evil. We don't really have a clue what is going on - Holliday reveals things slowly and you have to put together little clues (it's as much about what you don't see happening as what you do). We do know, sort of, where it will end up - the book opens with a short prologue - or rather we think we do, but I will warn you: trust nothing and no-one here. Like her characters, Holliday has many secrets and the book keeps springing them to the very end.

It is a great, tense read which I burned through in a single day. Whether describing Violet's and Carrie's raucous progress across Asia, their fractious relationship, the shifty groups of young men who wait in station car parks and seedy markets or the dubious pleasures of tourist hotels and packaged experiences, Holliday's eye is always sharp and you'll feel as though you are right there. Violet and Carrie also feel real - horrible at times, but real - and as their history emerges you'll feel sympathy for both, if at times limited sympathy.

For more information about Violet, see the Orenda Books website.

You can buy the book from your local bookshop, or online from Hive Books (which supports local shops), from Blackwell's, WH Smith, Foyles, Waterstones or Amazon.

As you can see from the tour poster below, there have been some superb reviews of Violet so far in the tour, and I'd urge you to dip in and sample some of them. 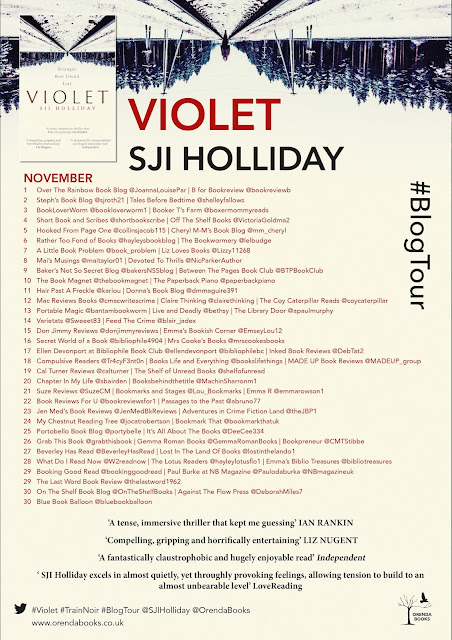