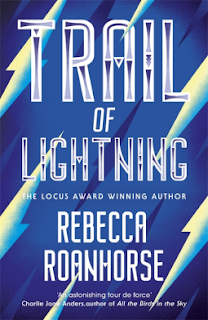 I love a book with a big, bold premise. Trail of Lightning certainly delivers this - Maggie Hoskie is a Native American monster hunter in a post-apocalyptic world where climate change ('the Big Water') has inundated much of the US and left the Diné (Navajo) people clinging to a precarious existence on part of their ancestral land, albeit (and ironically) subject to endless drought.

Maggie herself is an orphan, rescued and raised by the god Neizgháni - who trained her as an apprentice hunter before disappearing. Put baldly that sounds a lot of backstory in a short book (and there is more) but Roanhorse very skilfully parcels it out, only revealing details and facts as they are needed and allowing the reader to piece things together. The setup gives Maggie a degree of vulnerability - she is alone and mortal, facing supernatural threats that don't pull their punches, and her past has left her unpopular among the cops ('Law Dogs'), gangs, mercenaries and trade bosses who vie for power in Dinétah. There's sexism, too, highlighted when she's negotiating with a family over the price for monster-hunting job when their daughter has been snatched away by a 'tsé-naayéé'. ('Maybe they don't want to pay because I'm a woman').

I was impressed by the gritty reality of the world that Roanhorse describes, the impoverishment and general air of scrabbling for existence in a hard world. Of course it's not too much of a stretch to suggest that for Native Americans that is less an awful dystopian future than a version of their present lives and that they are already living in a post-apocalyptic world. Indeed, as described here the Big Water and its aftereffects have brought benefits such as independence ('Dinetáh risen') and - for some - even wealth. That's not a point overtly made - the story is really too fast paced to allow much time for such comparisons (though nor does the book gloss over injustices and marginalisation, past or present). Indeed it is pretty much contentious action from introducing Maggie on that first monster hunt to a final, awful confrontation with gods, monsters and vigilantes.

In between she's basically on the run, collecting a ragged assortment of allies who (of course) have their own agendas and trying to work out what's going on. Something really bad is at large, slaughtering people in the towns and leaving that trail of lightning. Even the best organised places aren't immune.

To solve the mystery, Maggie has to dig deep into her people's traditions, telling us in the course of that of a fantastical collection of gods and heroes from the old stories who are now, it seems, all to real in Dinetáh (I loved that Roanhorse makes no concessions to the English speaker, or indeed, review writer or typesetter, using spellings that I literally can't find the symbols for - for example, a word like 'wóshdee' where the two final "e"s ought to have both an acute accent é and a little mark underneath ę. My keyboard will allow one or the other but not both at once.) I loved this sense of thinness between two worlds, of the inhabitants of story walking this world, and it's done very plausibly (one god, Ma'ii/ Coyote, is a particularly natty dresser).

Maggie herself is a wonderful character - resourceful, slightly bitter in a way that's almost noir ('I lean back and start at the ceiling of the truck, asking the heavens for help dealing with men with their heads up their assess. I'm pretty sure no help will be forthcoming, but I feel the need to ask anyway') and always, always, slightly disappointed by those around her but carrying on anyway. She doesn't know everything, she's not always right (for example, she misjudges one young man she meets - he's handy with a gun, and she's surprised when her turns out to be gay) but is always ready to admit that and do better. Is she perhaps a bit overfamiliar with present day cultural references and technology? perhaps - but who knows what's current in 2030+ Dinetáh and that's intrinsically more plausible than gods and monsters anyway.

Overall then: I loved this book. I galloped through it, enjoying the buildup to the finalé, caring about the characters, refreshed by its not being another Western European strongmen in furs type of fantasy, and thoroughly liking the plot, characters and setting.

Best of all there is a sequel coming (the e-ARC had an extract in it, hopefully the publishers books does too) and I am keen to read that.