#Blogtour #Review - Nothing Important Happened Today by Will Carver 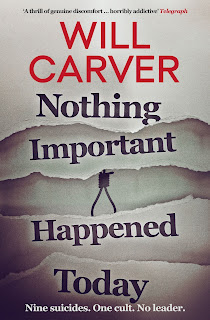 I'm grateful to Karen at Orenda Books for a free advance copy of Nothing Important Happened Today and to Anne for inviting me to take part in the blogtour, which I am joining today.

I should give a content warning that this book, and consequences try review, deal with themes of suicide.

For once, I'm genuinely unsure what to say.

This is a thriller different to any other I've read before. I'm really not exaggerating there. It has me speechless. Nothing I have read before is like this

One evening, as trains bear commuters home from London, nine strangers walk out onto Chelsea Bridge. Attaching nooses to the structure, they place them round their necks, and jump.

Nine deaths, nine strangers - and a manifesto from the "People of Choice". A cult is born.

But why did they die? How was the whole thing arranged? And what happens next? Important questions...

This is high concept material already, but Carver's handling of the story then takes things to an even stranger place. We don't follow the investigation, see how the police track down... something or someone, whoever or whatever caused this. We don't have a detailed examination of one or two of the victims. Instead we get short, intense vignettes of the nine and their lives before. We see the tiny tragedies, the miscommunications, self-absorption, the fatigue, the disappointments of the Lovers, the Poet, the Doctor, the Ungrateful and so on (where do these names come from?)

Rather like me. Irritatingly so. A bit out of it, a bit lazy. There. In a scary, inescapable way, Carver has skewered me on his page. And see where that leads...

Around the story of the Nine (and later, the Two, and then, the Twenty) he then gives us musings on,  clinical, cold instruction in, and discussion of, how to be a mass murderer and not get discovered. And on how to establish a successful cult (and on the intersection of the two).

As you might expect these parts can also be hard to read. This is about real murders of real people. I have always shied away from "True Crime" for this very reason - in fiction, however grim, one has the consolation of knowing that at least it's all made up, and the dashy, flashy nature of crime fiction with its hero DIs helps establish that distance, even when (especially when) it gets all noir on you. Here, there isn't that distance. And Carver has clearly thought about his stuff here. There are philosophies and practicalities: the cult leader should have a Number Two who will take the fall when it all comes down. the serial killer should, through, work alone. And so on.

It's a mark, I think, of how good Carver's writing is that he engages despite this dark, grim material. And how he does. Phrases like "unputdownable" and "page-turner" are thrown around too lightly today, but they are really apt here. This is a book that, once started, you have to finish. It's a bit like getting into a very grubby bath which has rather unpleasant things floating in it but basically you have no choice.

An unforgettable book. It is scary to think what Carver could do if he turned his talents to bad. For my part, I'll watch out for crisp white envelopes in the post and put any I do receive straight in the fire...

The Nothing Important Happened Today blogtour continues with a star studded cult, sorry, cast of bloggers as you can see below. For more information about the book, see the publisher's webpage here.

You can buy it from your local independent bookshop, or from Hive Books who support Indies, as well as from Blackwell's, Foyles, Waterstones, WH Smith or Amazon, to name only a few. 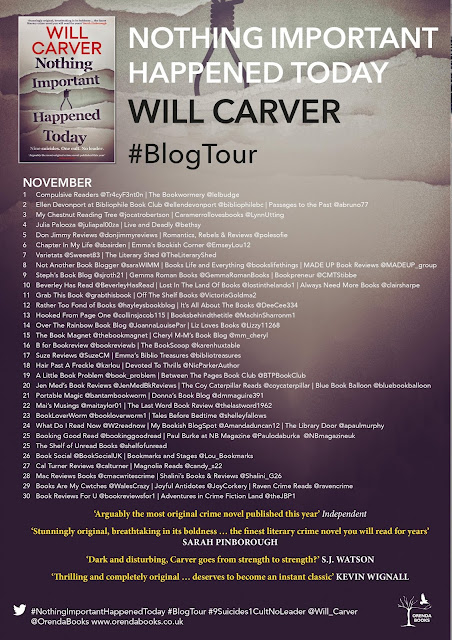