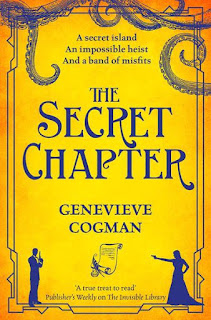 I'm grateful to the publisher for a free advance e- copy of this book via NetGalley.

I've loved Cogman's Invisible Library series from the start. As an avid reader, the idea of a pan-dimensional Library staffed by kick-ass librarian-spies who play a valiant role in keeping the forces of chaos at bay across multiple words is just compelling. And Cogman's hero, Irene - a cross between book-lover and ruthless assassin - is wonderful. I think I've lost a bit of my heart to her.

So a new instalment is an eagerly awaited event, and I devoured this one once I got it on my e-reader. It's essentially a heist story - Irene and Kai have to team up with a pretty shady bunch (a gambler, a master thief, an IT guru, a scorching driver...) to steal... an object - not a book this time - from a tightly controlled museum. The team consists of both Fae and Dragons, and there are trust issues besides - some of them haven't even heard of the Truce! - so lots of scope for misunderstandings and mistakes, and it seems to fall to Irene to hold things together.

In this book Cogman is deliberately bouncing her story off classic heist tropes, walking a narrow path between, on the one hand, taking them too seriously and, on the other, just sending them up. So we have the Casino Scene (Irene done up in a little black dress and playing the gambler's moll), the crime boss's Island Base (complete with shark tank), the Getaway, the Shakedown, and many more. They're all handled deftly, dramatic and tense but just a little bit knowing - reflecting the fact that Cogman's Fae are creatures who by their nature aspire to fulfil archetypes, the more successful ones drawing others into their stories. They're opposed to the dragons, who stand for Order and Stability but - as gradually becomes clear in The Secret Chapter - not always in a way that leaves much scope for the freedom of the individual.

Amidst the almost nonstop action, this book begins to tease out such those underlying strains in Cogman's universe (Libraryverse?) revealing some new rivalries and teasing ethical dilemmas (Irene, worrying, reflects that nobody - Fae, Dragons or even the Library itself with its cheerful disregard of others' property - really possesses any moral high ground). We learn more about Irene's family (annoying, but dear to her) and - perhaps - glimpse the well-guarded history of the Dragons themselves.

And besides that we have Cogman's trademark wit ('An attempt by vampires to take over the Conservative party in Great Britain', 'The United Kingdom... did attempt to leave the European Union last year, but apparently that was prompted by demonic interference...') and some sharp writing ('as elegant as mathematics and as perfect as frost', 'Paranoia raised flags in Irene's mind and threw up fortifications'). It makes for a book that is simply a joy to read - deeply atmospheric where it should be, properly exciting when anything's going on as it generally is, and tender too. This is a series that shows absolutely no sign of losing pace, and I'm already impatient for the next.

Only two things I regretted.

Secondly - Genevieve, just what did you think you were putting Irene through in that scene towards the end? Doesn't she deserve a bit of dignity? I was almost shocked. Honestly.

For more about The Secret Chapter, see the publisher's website here.