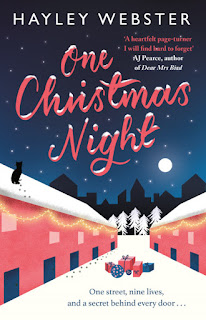 I'm grateful to the publisher for a free advance e-copy of One Christmas Night via NetGalley to consider for review. (I should admit, before I start, that while I don't know Hayley Webster, I do follow her on Twitter where she is unfailing interesting. If you don't follow her, you should.)

In One Christmas Night, we visit Newbury Street, shortly before the Great Day itself. With some prescience, Webster points to 'a Vote Green diamond sticker in the front window from the last election' - so we're bang up to date in 2019!

The residents are preparing, whether in the private houses, the subdivided flats, or the social accommodation of Victory House. Christmas may be an occasion for spending and cosnpicouous consumption, but it is a great leveller, rich and poor alike sharing in the nostalgia, the sentiment, the customs. Christmas Eve sees the annual Festive Feel Good at the Mariner pub hosted as ever by Sue and Larry. Fridges are full of turkey, trimmings and veg, and the presents are ready, mostly hidden in the cupboard under the stairs. At the Stop Shop, softened Easy Peelers are being sorted from the stock and last minute gifts bought.

Everything is nearly ready.

But of course (because otherwise there wouldn't be a story) not everyone is happy, not all is well.

A thief is at large, preying on all those tempting presents (and even on the food). We meet this person in the first pages, hiding in the shadows and avoiding the CCTV, and we see the grief they cause, the sense of violation of both homes and the season. Who would do a thing like that? It could be anyone, and it seems likely to be a local, someone well known to all the victims. Even though it's Christmas, Detective Constables Crane and Ado are on the job and on the lookout for the perpetrator.

Elsewhere, Frank mourns his wife. It has been a tumultuous year: he lost his Allie - and then fell for Jen, married to his best friend Craig. There are kids too, and it's all a mess.

Craig has his own secrets as well. And there's an elderly couple, Len and Wendy Finch, who are living on the edge of destitution - before things take a turn for the (even) worse.

A young woman mourns her lost daughter and takes out a record of Turandot which she plays every year, only on this day, remembering.

A husband browbeats and belittles his wife.

Two brothers are at odds with each other.

Joanie Blake misses her mum ('How can her mum just be gone...?') It will be the first Christmas without her, and everything must be done right.

Webster skilfully weaves together all these stories, and more, punctuating her tale with Lucy Crane's investigation and multiple appearances by a cat who, after the best tradition of cats, shows up at every house in the street. I was impressed by the depth and personality Webster gives her characters - whether or not they take centre stage, these feel like real people you might bump into in the shop or the pub. Above all, perhaps, this applies to Joanie and her girlfriend Irma, who are at the centre of things, Joanie is one of those people who - despite her own troubles - seems to hold up the entire community. She invites the lost, the lonely, to her Christmas table. She challenges a racist scallywag in the shop ('How dare this angry man, in his Budweiser T-shirt, leather jacket and Timberland boots call out a stranger in this way. How dare everyone stay silent while he does it?'). She is there when she is needed. And Irma, a stalwart behind the bar at the Mariner, whose anxious, haunted past is gradually revealed through the course of the story.

Not everyone is goodhearted, of course. Webster's less pleasant characters are just as well depicted, whether that racist, Euan, the ubiquitous thief (apart from their anonymous appearance at the beginning of the book, we know they're  stalking through the pages somewhere, we just don't know we are seeing them. And the trail of loss they leave behind, which almost everyone is having to deal with, is almost a personality in itself with a cumulative effect that's most chilling.

There are others - the nasty young man who whispers tales to the police, causing no end of trouble for... someone. Or that controlling husband (I won't say who it is, you need to let the picture build up). And there are some other dark themes here. A girl who was in care and whose foster mum failed at just the moment she needed a little love. Exploitation, racism and greed.

No, it's not all soft focus and angel choirs (in fact there are no angel chords). But Hayley Webster's empathy and understanding of character, and her writing are simply brilliant ('The sun was a stamp of approval, low, gold with rewards', 'Wendy sees the grin on the girl's face... The start of love when the flame's first lit'). There's a temptation to call a book like this "feel good", like the Mariner's festive event, and there's nothing wrong with that, but I think One Christmas Night does something more.

At the darkest time of year, you can't shut out that dark. You can't ignore it. You can't karaoke it away (even by '...singing "Santa Baby" in the most unsexy voice that's ever been used for any song since there were songs'). You can't eat it away, present it away or tinsel it away. You have to face it, invite it in. But once invited in, offered warmth, food and a place at the table, it might become less terrible.

That's what One Christmas Night does - it acknowledges the darkness (and such darkness) but shows that it does not, in the end, have the last word. There is courage here, generosity of spirit, solidarity. And that, to me, is the most Christmassy message of all.

I'd strongly recommend this book - and I think it's not just for Christmas.

For more information about One Christmas Night, see the publisher's website here.