#Blogtour #Review - The Pursuit of William Abbey by Claire North

I'm grateful to Orbit and especially to Nazia Khatun for a free advance reading copy of The Pursuit of William Abbey to consider for review and to Tracy Fenton at Compulsive Readers for inviting me to take part in the blogtour.

A new book by Claire North is always a very special event in my reading calendar, and William Abbey didn't disappoint.

In something of the same vein as the Flying Dutchman, this is a tale of a man cursed after an act of selfishness. William Abbey is a mediocre doctor in 19th century Africa, banished to the colonies after falling for the wrong girl. The sin that curses him is that, when he comes face to face with the lawless racket that is Empire, he is indifferent to an act of savagery. No more and no less indifferent than countless others - but it's Abbey who doesn't act at a particular moment when a boy, Langa, is lynched, Abbey who refuses to help him as he lies dying, and Abbey who Langa's mother curses. I took him as emblematic, perhaps, of the "nothing to do with me" attitude to colonialism and historical crimes.

Under the curse, Abbey suffers a strange, dual fate: everyone he loves is doomed to a terrible death, unless he outruns Langa's spirit. As the spirit comes closer, Abbey is able to read the truths in men's (and women's) hearts. When Langa is really close, Abbey can't help but proclaim those truths. When Langa reaches him, someone dies.

So the endless chase begins.

Langa is not quick, but he is relentless, crossing land and sea, mountain and desert. Abbey has no special resources save his ability to discern truths - but in a fevered world, building up to the Great War, this may be a sought after skill. Or it may be one that will just get William Abbey into an even worse heap of trouble.

I loved this story. It is not a pleasant read: North doesn't spare us the realities of colonialism or war, or indeed of the grinding, chaotic lives of the poor (for example, the brutalities of the British in India or the hatreds and prejudices that set new immigrants to the USA against each other, instead of the system that keeps them all poor). More prosaically, Abbey isn't a sympathetic character or one it's easy to spend time in the head of. And Abbey's ability - his curse - perhaps his blessing - allows him, requires him, to tap into streams of truth variously banal, tragic, desperate and revealing. It is, if you will, an all-areas tour of 19th century politics and society. And that means, of course, our politics and society because we are not different people now, are we?

Here are revolutionaries and spies. Thieves and shamans. The poor and the very, very rich. Lovers and blackmailers. Ordinary people clinging on, and people whose way of life is being erased. North's imagination, demonstrated in her peopling of the book, is simply astounding as is her gradual, layer-by-layer portrayal of Abbey himself - presenting not only the naive young man who travels to Africa to be cursed, but the older, cynical operator after decades on the run. And, of course, the gradual process that turns one into the other.

It's a story, I think, of an awakening morality, a gathering empathy as Abbey goes from despair and a desire to be "cured" of his shadow - to "apologise", be "forgiven" and receive some kind of proxy absolution - to a deep appreciation of the ways of the world and a recognition of his part in it, not only in the death of Langa but in the system that produced that death. Meeting other bearers of the same terrible burden, he understands that some see it as a a blessing and actually seek it out.

The morality here is complex. North wants to show, I think, that merely feeling shame, regret, horror, at atrocity is not enough. Distancing oneself from vile events is not enough. (If Twitter had been invented in Abbey's time, I suspect his early travels would have been accompanied by a #NotAllEnglishmen hashtag...) But the search for an alternative is hard. Early on, Abbey hooks up with those who may be able to explain his condition, even cure it. But Langa still comes. Attempts to promote justice and the cause of the "people" don't go far. Sidetracking into personal revenge leads Abbey to the situation framed by the opening of the book, with him as a doctor in the First World War, meeting Sister Ellis, a young nurse at a field hospital - and it's her who, perhaps, brings some moral sense back to Abbey. Ellis herself is fascinating, a woman of humble origins who, like Abbey, fell for the wrong person and who's basically conned her way into the aristocratic club of the Nightingale nurses. Her background gives her, perhaps, a perspective that Abbey - for all his truth telling - has missed. But will it be enough to save him (whatever that means)?

This is a blistering book, a magnificent read, a book with real moral heart, burning with anger and freighted with inconvenient truths. It's a book that will continue to burn away in your mind long after you finish it, that will follow you, steadily, relentlessly, even if you try to leave it behind.

Very, very strongly recommended, and up there with North's best writing.

For more information about the book, see the Orbit website here.

Follow the tour at the blogs on the poster below!

And you can buy the book from your local bookshop, from Hive Books, which supports high street bookshops, from Blackwell's, Foyles, WH Smith, Waterstones or Amazon . 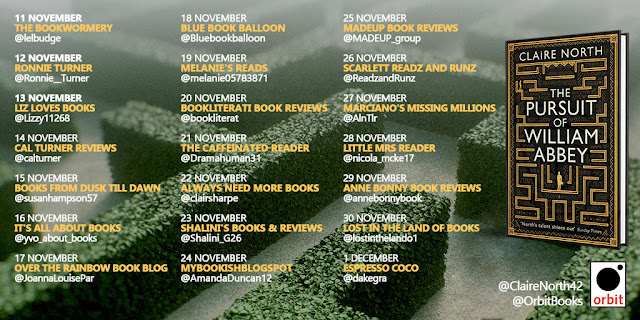