Review - The Nightjar by Deborah Hewitt 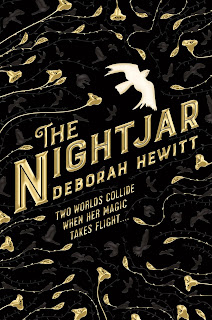 I'm grateful to the publisher for a free advance copy of The Nightjar to consider for review.

In Hewitt's debut novel, Alice Wyndham, an unremarkable young woman living and working in London, discovers that she has unsuspected abilities and a place in a magical and unseen world, another version of London. This knowledge brings not only wonder - Alice can see the birds which accompany all humans and which safeguard their souls - but danger too; danger to her, and danger to her family and friends.

I love the premiss of this kind of fantasy.

The secret, alternative world, with its own rules and society.

The possibility of escape from the banal, the ordinary, the constricting (Hewitt is rather good on Alice's awful, sleazy boss and her dreadful workmates).

The process of denying, then considering, then accepting the staggering reality - and then of trying to reengineer one's life to include the new while holding on to loved ones, familiar things and what's seen as safe. Hewitt pitches things just right here - too much resistance and the reader wants to shake the protagonist by the shoulders and tell them to get on with things, too little and there's no tension.

And the world she describes - a place called the Rookery, an echo of past London full of disappeared buildings and quaintly old-fashioned scenes - is real, vivid and interesting, as are the people in it. This is clearly the first in a series and the author sets up plenty of stuff for the future: four distinct schools of "legacies" (what we might call varying magical gifts), a police service for the Rookery, a death-cult, necromancers, gangsters, spies. Not all of it is explored fully but that's fine, I'm sure we will get there!

There's also a potential smouldering romance. To my mind this didn't work quite so well as the world building. It's difficult to say a great deal about this without giving away plot and this is one book where plot secrets matter. I will just say that the character to whom Alice is attracted (plainly to us, less so to her) is very mercurial and there are reasons for this - but it makes the idea of there being a relationship between them somewhat daunting. Another factor that impedes this is the sheer flow of events. Once Alice discovers the Rookery, Hewitt doesn't give her any time to acclimatise, things begin to happen to her and she's on a deadline, driven by a crisis back at home. This leads her into a series of scary encounters. For me, things crossed the line from being exciting into just too frenetic - I'd have liked more time to admire the scenery and get to know Jude, Sasha and the other residents of Coram House - but this is very much a personal preference: if you like your fantasy really busy and action filled, The Nightjar should be just what you want.

Overall this is a solid beginning to a series and left me wanting to know more and wondering what will happen next. I'd like a bit more breathing space in future books, possibly, and some exploration of the Rookery and its relation with our world but I will look forward to what Hewitt has coming.

For more information about The Nightjar, and links to buy the book, see the publisher's website here.