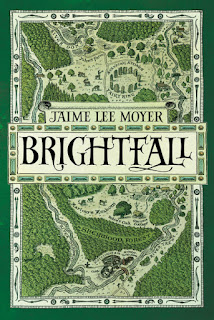 I'm grateful to the publisher for an advance reading copy of Brightfall to consider for review.

Reimaginings of classic themes, subjects and even stories are definitely a Thing right now, especially new treatments of the fantastical - just think of all the Alices out there - and the story of Robin Hood is very suitable for such treatment: the subject stirs the imagination, but the source material is relatively slim, giving plenty of scope for reinvention, addition and reworking.

In keeping with that, Jaime Lee Moyer approaches her subject from a refreshingly different angle. This isn't just more adventures for the Merry men. Instead she sets the story twelve years after the 'end' of the outlaw band and focusses on Maid Marian, rather than making her, as in many versions, simply a hanger on. Indeed, Brightfall is narrated by Marian, but an older Marian who has spent years caring for her children after being abandoned by Robin.

Now the surviving outlaws are being struck down by a curse, and Marian - in this retelling, a witch who is in tune with the ancient magics of Sherwood and who has regular dealings with the Fae - leaves the safety of her cottage to investigate. Falling in with a Fae Lord who she refers to as 'Bert' (real names have power, you see!) and, inevitably, with Robin, she travels though the forest looking up old friends and making new enemies.

I enjoyed the presentation of a Merry England where most people are not religious fanatics, with the Church by and large a friend; where life is an effort, with time needing to be spent on craft and trade; and especially one that is recognisably rooted in real places and geography. I think the story gains a lot from this (it would have been possible to leave it all frustratingly vague, or even, of course, to set the whole thing in some made-up fantasy land). It's also fun to see things from Marian's point of view (and she points out that those ballads, mostly written by Alan à Dale, were selective with the truth and did tend to big up Robin a lot).

The plot is essentially a chase with a mystery - who is causing the deaths and why? - at its heart and Marian is very capable, fighting off magical attacks, treating injuries and wounds and sparring verbally with her ex (when he will reply: Robin is often in a sulk). I must admit, though, I did find it frustrating at times that Marian, the viewpoint character, was so very competent and her motives and actions so very clear (protect her children, who are also threatened by the curse) while in contrast, Robin, comes and goes, is tormented, wracked by guilt and religion - but we are not privy to his thoughts and he is very selective in what he tells Marian. In other words the life in this story still seems to be with Robin (even if he's very unlikeable) despite the pains taken to give Marian a voice and agency.

Perhaps the most obvious example of this is that while Robin is still Robin of Locksley (and often referred to as such) we have no backstory for Marian herself Beyond references to her part with Robin and his band). I think that in giving her the opportunity to tell her own story, there could have been more story to tell, rather than one in which she is effectively still subject to Robin's whims and notions.

I don't mean to sound too critical here - this is a cracking story once it gets moving. Marian brings a lot to it in terms of knowledge, courage and sheer grit, and the book ends in a tense and moving action sequence. There is also romance. But I felt I could have got into it more quickly if there had been more (from Marian) about Marian and less about Robin.

On the other hand perhaps that's a subtle reflection of the effect on a woman's life of falling in with a dashing and unstable rogue... which he certainly is.

Great fun, with a convincing atmosphere of medieval England and a nicely grafted on magical realm (complete with the impact on that realm of human encroachment and interference). I think there may be more stories to be told exploring the life of Marian of Sherwood and I look forward to reading them.

For more about Brightfall, including links to buy the book, see the publisher's webpage here.