Blogtour review - The Girl the Sea Gave Back by Adrienne Young 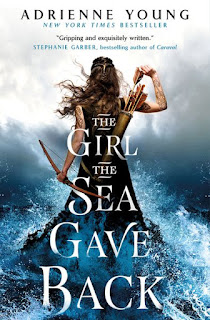 I'm grateful to Titan for a free advance reading copy of The Girl the Sea Gave Back and for inviting me to take part in the blogtour.

Set in the same universe as The Sky in the Deep, The Girl the Sea Gave Back takes place ten years later and follows both Halvard as as an adult and leader of his, now united, people - with flashbacks to his earlier life - and a new character, Tova (the "girl" of the title).

Tova is an exile from her own clan, the Kyrr, who has a valuable talent - the ability to cast runes and predict the future. She was given grudging sanctuary by the Svell, a people who sense opportunity in the losses that befell the Nãdhir, but she is neither welcomed nor loved: rather, blamed for any misfortune that occurs and shunned as a witch, she is tolerated only so long as she is useful.

I found the story of this self-possessed yet haunted young woman both captivating and sad. Tova believes herself cast away for some dreadful crime, taint or feud - but she was too young at the time to understand what. Young's imagined world - clearly based loosely on Norse culture - is a place of clan warfare and deeply held blood feuds, one where an exile is unlikely to survive long with no-one to shelter them or avenge their death. It's a poetically imagined country of forests, mist-wracked fjords and stoutly fortified villages where violent death can be ill afforded but is nevertheless common. And Tova has to face her own responsibility for this spiral of destruction and revenge: the Svell are finely balanced between those who want to slaughter their weakened neighbours and those who prefer peace. There's no perception of any morality in this - it's all about what will benefit the clan in the long run, and Tova's prophecies may affect this balance, especially as interpreted by the ambitious Jorrund, the closest that Tova has to a guardian among the Svell.

The ethics of self vs clan, survival against consequences, are at the heart of the story, Young taking her time to set up the complex dilemma Tova faces - a matter not only of humanity but of the mysterious Spinners of fate and of the gods themselves. It's a situation that also draws in Halvard, struggling to accept his destiny as leader and doubting his ability. Surely he was chosen for peace, not a time of conflict? Both protagonists are complex, believable people struggling with the hand that Fate has dealt them. They are not experienced in the ways of the world, both stumbling and failing and aghast at the results of that.

I just loved this book. Apart from the flashbacks, events unfold pell-mell over a few days with little room for error among the contending groups and little prospect of mercy when things go wrong. My heart was in my mouth as things came to a head - things are kept at a high pitch of tension right to the end.

You can buy The Girl the Sea Gave Back from your local high street bookshop, including via Hive; or from Blackwell's, Foyles, Waterstones, WH Smith or Amazon.

For more about the book please see the Titan website. 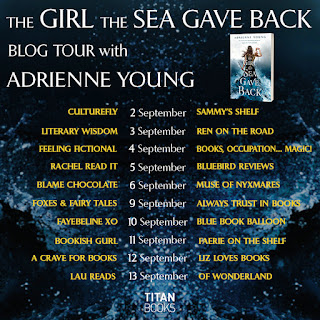