I'm grateful to Titan Books for a free advance copy of Wonderland to consider for review and for inviting me to take part in the book's blogtour.

I love themed anthologies. It's always interesting to see what a diverse group of top-grade authors make of a meaty subject, what similarities and differences there are between their take on it, and how the editor juxtaposes things. Recently there seems to have been a resurgence of anthologies playing with classic stories - understandably because, really, with something like Alice, there is always something new to say, not least because times change, we change, and our approach to these stories must also change.

This anthology is bookended by poems from prolific author and poet Jane Yolen. Alice in Armor muses on an Alice taking her own life into her hands and arming herself against injury. The implications of this are made clearer in Yolen's closing poem, Revolution in Wonder. It's fitting that Yolen both opens and closes the book, echoing the range of approaches followed by the stories in between (especially given her contributions elsewhere to this whole area of reinterpreting and reimagining those classic tales we all have as part of the furniture of our minds.

Overall this collection has teeming variety. There are stories inspired by Wonderland, using its look and feel, as it were, stories which expand upon aspects of the original books, prequels, sequels, real-world stories where a "Wonderland" aspect might be taken as objective reality or equally, may reflect a state of mind or be a metaphor for the distance from childhood. There are transpositions of Alice to varied settings - the Wild West, a dystopia future, urban Japan - and all manner of other reimagining (including some which touch on uncomfortable aspects of Dodgson - Lewis carroll - and his circle.

They are all strong stories and it would be invidious to try to rate each one, but I particularly enjoyed Genevieve Cogman'' The White Queen's Pawn, Good Dog, Alice by Juliet Marillier, About Time by George Mann, LL McKinney's story What Makes a Monster and Alison Littlewood's Eat Me, Drink Me.

In Wonders Never Cease, the first story proper, Robert Shearman picks up where Alice itself ends, imagining her leaving Wonderland and rejoining a very prosaic Earth of roundabouts, typing and switchboards. Or has she left? The story is effectively timeless, weaving together Wonderland weirdness with moments in an ordinary life, while keeping the sense of being in a dream which Carroll's novels depend upon.

There Were No Birds To Fly by MR Carey presents a Wonderland-tinged, but post-Apocalyptic, Brighton. Deadly aliens walk among us, and a small party is fleeing - but to where? And why? 'If you follow the rules' the Narrator (who wears an apron, and carries a set of carpenter's tools) is told at the start, 'you'll live a whole lot longer.' And there do seem to be rules in this story, but they are frustratingly hard to grasp. A grim, allusive take that seems to inhabit the spirit of Wonderland while being rooted in a real place.

Genevieve Cogman presents a different Alice in The White Queen's Pawn, set in the 1930s where dreams of dozing by the river and drinking resizing potions are long gone and the nasty realities of the later decade take the foreground - with, however, the order 'Off with her head!' still ringing. A neat reversal involving a looking glass is a nice commentary on the politics of those, and perhaps these, times.

Cavan Scott's Dream Girl plunges into what seems to be a world of classic horror - a dark and bloodstained Wonderland with its own secrets where the March Hare's madness has taken a sinister turn. Alice is missing - if she is found will she be able to restore order or will she just bring ruin? There is a clever conceit to this story which I didn't spot coming, but it's one that casts a shadow at the end of the story. I wasn't sure whether the was a Happy Ever After here.

In Good Dog, Alice by Juliet Marillier the protagonist is Dorothea, not Alice, but there is a small doorway, there is a magical food that can resize the eater and there are - in the background - Oxford dons. Here Wonderland (if that's what it is) is both a refuge and a source of strength, with the real hours outside, in our world. A neat and haunting story, one of my favourites in this book.

Jonathan Green's The Hunting of the Jabberwock gives us the true story of this famous quest - in which things turn out to be both less, and more, heroic than the legend which has been handed down. Drawing on the possibilities for the Hunt as a self-contained episode Green creates what could almost be a Dungeons & Dragons module, complete with an eager young Squire, a battered, world-weary knight and an unfriendly Hermit. Liberally spattered with gyres and gimbles, more raths and fearsome Jubb Jubb birds, this story is fun and entertaining.

In About Time, George Mann gives a thoughtful interpretation of Alice in a wider context, dwelling on childhood and adulthood and the responsibilities each has to the other. Here, as in several other stories, Wonderland serves several purposes, including being a refuge, a comfort and a mirror (of course!) to "real life". Another of my favourites.

I previously knew Angela Slatter for her Verity Fassbinder series of urban fantasy sets in Brisbane (excellent - read them!) so it's good to see her do something every different in Smoke 'em if You Got 'em which is... how to describe it? A kind of Alice "Western" complete with six-shooters, a sheriff and a saloon. An excellent, rounded story in itself giving its Alice plenty of action and agency and, perhaps, a peep into a wider world we might see more of? I can hope.

Rio Youers's Vanished Summer Glory takes a more sentimental vein, being one of those stories that looks back on a (sort of) past Wonderland, or Wonderland experience, making no judgement on objective reality (I had thoughts) but definitely using the whole concept to convey vanished youth, innocence and childhood joy. As a native of Cheshire I was pleased to see the Daresbury setting.

Black Kitty by Catriona Ward might be, perhaps, a prequel to the Alice stories? It very cleverly weaves elements from the Alice mythos into a deeper, scarier world but - and I think this is unusual in this sort of story - gives its Wonderland participants real hopes and fears, which are perfectly rational in their (irrational) world.

Laura Mauro's The Night Parade takes us to Osaka, to a humid night where Airi, unable to sleep, lights a moody cigarette and observes the city from her tiny balcony. That might seem as unlikely a jumping off point for a Wonderland story but it really isn't - as Mauro shows, everything joins up. Another of my favourites, both for its distinctive atmosphere and for its resourceful central character.

LL McKinney has form in reimagining Wonderland, her A Blade so Black using it as the basis for an urban fantasy set in modern Atlanta, so What Makes a Monster already has a whole world to draw on - one she uses with relish in this story of London, gaslight and fog which also serves as something of a prequel for ABSB.

James Lovegrove's The White Queen's Dictum is perhaps more tangentially Wonderland-ish - the title refers to the idea of believing "six impossible things before Breakfast" but with that nod we're into rather a different kind of story - still an effective and twisty one, though.

In Temp Work, Lilith Saintcrow gives us a grim, corporate-ruled and environmentally degraded future. Not a Wonderland, you'd think, and temping maid Alise, required to dress pleasingly for someone else's fantasy, is just making it from one day to another, staving off hunger and getting by. Its not though only her bosses who have have strategies and plans.

Alison Littlewood's Eat Me, Drink Me, like a number of other stories here, picks up on the atmosphere and trapping of the original stories and deftly turns them round to reflect on its Alice's situation and dilemmas. A claustrophobic, harrowing and tense story, another favourite in this collection.

Cat Rambo's story How I Comes to be the Treacle Queen is a slightly different take, written in - at first - a slightly difficult language but it's an intriguing and passionate story that quickly grew on me. It is really Wonderland from below. Excellent.

The final story in the book, Six Impossible Things by Mark Chadbourn complements Vanished Summer Glory in meditating on "real life" (whatever that is) but doing with both a more direct take on the Alice books (looking at the people who inspired then, including some darker aspects concerning Carroll) and a less direct one: it involves an Alice, exploring something very like a canonical Wonderland... but not exactly like. Fittingly, the story raises many questions, bringing the anthology towards its end in a very open way, before Yolen's closing poem of high revolt rounds things off.

For more about the book, see the publisher's website here and the other reviews and pieces in the blogtour set out in the poster below. 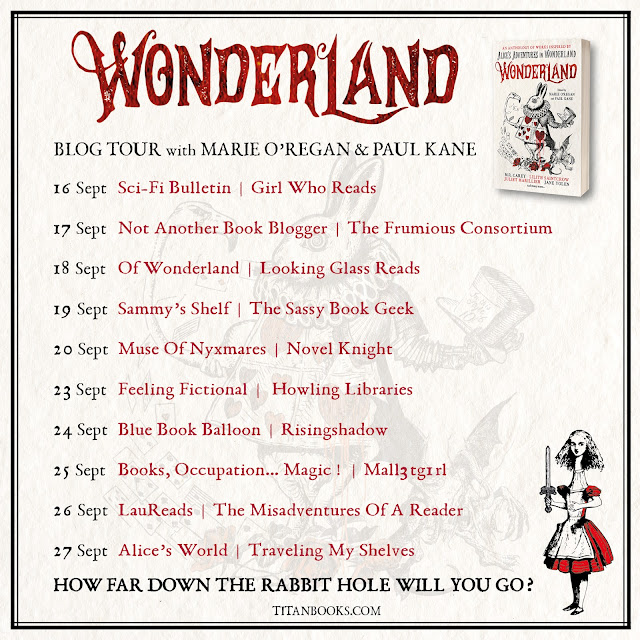