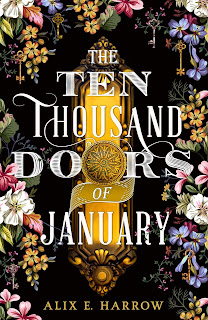 I'm grateful to the publisher for an advance copy of The Ten Thousand Doors of January and to Tracey Fenton for inviting me to take part in the book's blog tour.

The Ten Thousand Doors of January is a book I'd recommend 100%, probably one of my favourite books so far this year (and it's been a good year!)

At times exciting, tearjerking, heart-poundingly tense, and romantic (and sometimes all of these together) this fantasy adventure is both about the urgent need to see, and to cherish, the magic in life, and about growing up, forgiving and living. Every page burns with life, with wisdom and with love.

January Scaller is a young girl growing up in New England in the house of Mr Locke, a gilded age robber baron whose passion is archaeology - or at least, archaeological loot, which he employs January's father to hunt down, sending him all over the world. January's glimpses of Julian grow fewer and fewer, while Locke attempts to mould her into a "good girl" - quiet, well behaved, obedient - with limited success. January is a lonely child but she is comforted by her dog, Bad, by the comics and storybooks shared by the grocer's boy Samuel... and by the strange tokens and gifts which occasionally turn up.

Intertwined with January's story is that of another young women, Ade, who sought adventure, ran away from her childhood home, and found it, at great cost. To begin with it's not clear what the stories have to do with each, nor with the readings January gives us from a strange book she has found. The jumps between these in the early part of the book may seem a bit jarring, but bear with the story, it all makes sense in the end. The point is not the destination but the journey, and Harrow is an excellent guide, leading the reader through a rich, emotional itinerary as January grows up and observes her place in the world. Dwelling within Locke's sphere of wealth and privilege, she has experiences and advantages not available to others of her "mixed" heritage, but she's both aware of how fragile her position is and terribly conscious of loss, of her father seeming to reject her on her endless quests.

A bookish girl, clearly, one prone to seek solace in stories, to dwell in her own imagination, biddable, polite and eager to please.

Well, yes... and NO. As January's life unravels over a few terrifying weeks, and she faces the loss of everything and everyone she knows, she proves to have steel in her, and unsuspected gifts. I don't think I've read anything recently as tense as the pages where January suffers blow after blow - often through being too trusting, just not quite quick enough, too ready to blurt out what she has seen or suspects. Frustrating for the reader at some points, but showing her humanity. January learns some hard lessons, and several time brings disaster on those she loves. While never less than. absorbing there are places where this story is very hard to read - a triumphant token, I'd say, of Harrow's ability to convey the beauty and terror of January's life.

There is a darkness, a destruction, at work in the world, alongside the complacency of the opening chapters - this is 1901, a time of progress, of civilisation, of peace and progress - and January only gradually learns what it may have to do with her and what, unknowingly, it may have cost her. Then she needs to choose her side and question all her assumptions.

In all, this is a glorious book, packed with insights, empathy, humour grim in places) and above all, with the personality, shrewdness and insight - above all, the self-awareness - of this very remarkable protagonist.

January will run. Monsters will follow. Hearts will break...

And remember: "Men are mostly cowards..."

For more about this book, see the publisher's website here.

To buy the book - and you should - you can visit your local bookshop, of course, or use Hive which supports local bookshops - or there is Blackwell's, Foyle's, Waterstones, WH Smith or Amazon. 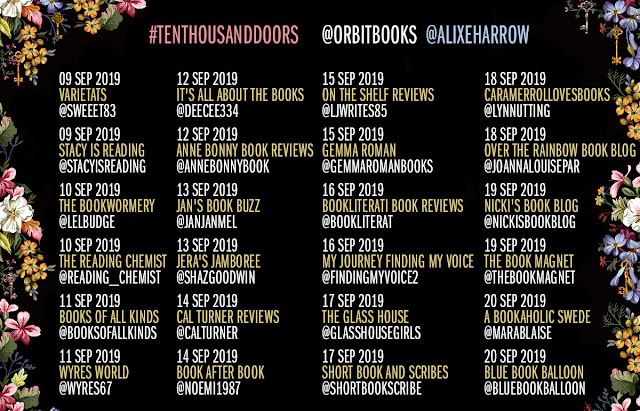