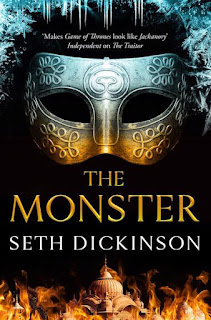 I'm grateful to Tor UK for an advance copy of The Monster to consider for review. (Thanks, Jamie!)

Dickinson's first book The Traitor (or The Traitor Baru Cormorant, depending where published) was a truly different take on fantasy, introducing us to Baru, a young woman in a newly colonised territory now ruled by the Imperial Republic of Falcrest. As well as showing the economic and cultural damage done to Baru's people, the book gave us a determined and ruthless hero who set out, by rising within the Falcresti administration, to destroy the oppressor from within.

The Monster - published today - picks up right where The Traitor [etc] left off. To earn a place in the hierarchy of Falcrest, Baru fomented a rebellion (destroying a Falcresti fleet to demonstrate her bona fides to the rebels) which she then betrayed. As a coup de grace, she executed her lover, the duchess Tain Hu, by drowning her, a powerful scene repeated at the start of The Monster. Now Baru has the "in" she wanted to the élite of Falcrest and she can do as she wishes.

If only life were so simple.

The Monster pulls off the awesome feat of being, if anything, even better than The Traitor. While the latter was superb in demonstrating the rottenness of colonialism, and the corruption of Baru in her quest for its overthrow, it was very preoccupied with strategy, tactics and war. The present book, on the other hand, takes the struggle every much into Baru's soul and visits its consequences on her. The betrayals she has made have unmade her; the injuries she suffered have cut off part of her sight (or is that, too, an outworking of guilt?)

And what she did has set enemies on her. The Falcresti Navy, whose ships Baru burned and whose sailors she murdered as an agent provocateur,  has not forgiven. Nor have the erstwhile rebels. But it also turns out that far from being a disciplined, orderly polity, the powers in Falcrest are effectively warring barons, contesting as much among themselves as with their external enemies. Wielding different powers and representing different interests - navy, secret service, science, church, Parliament - they blackmail, bribe and scheme in the name not only of Falcrest but of different, longer term goals. Masks are worn in the Empire of Masks, loyalties unclear, and politics is a great game.

In The Monster the apparent central question is whether or not there will be war with the Oriati Mbo, a southern power very different and very alien to Falcrest. This potential conflict between two mighty opponents seems to hold the seeds of world chaos, yet there are those who would plan exactly that.

The real question is, I think, slightly different. As these devious cryptarchs play their game, I found myself asking, what does winning mean? Falcrest itself is, interestingly, not portrayed except through it agents: we don't meet its people at home while we see a lot of its rivals and subject peoples and their lands. What even is Falcrest? is it real at all? I wondered.

In contrast to that mystery, loved the Oriati Mbo and its people. Here Dickinson gives us a very different culture from those in the previous book, a world revolving around the idea of trim, something never exactly defined but which seems to be a mixture of fate, luck and being in good spiritual standing. In a couple of flashbacks we see the impact of this on the lives of characters who will be important later on - and eventually, when Baru collides with an Oriati ambassador, we also see their horror at the spiritual knots she has bound about herself through her actions in the first book.

It's, in many ways, a grimmer read than The Traitor, focussing on a wounded Baru who is no longer manipulating events but rather being driven by them; drink sodden, fleeing enemies who are able to strike and strike again. The fact that Dickinson still makes this compelling and at times even funny illustrates his eeriest knack for producing writing that gets under your skin - or perhaps inside your mind - and continually comes back with pithy asides and observations about power, human nature and human frailty.

I was also impressed by the range of characters here - represented as from a teeming mix of races and cultures, with non-binary people very visable and women in many active roles, especially in the Falcresti Navy. (There is a running joke of these Navy women assuming that men will be impulsive and emotional).

This is the sort of book that cannot be rushed, each conversation, each scene, reveals and conceals new layers of meaning with the relationships between old allies and new enemies bringing whole new dimensions even to events I thought I'd understood.

A great read, with a rollicking sense of life whether in its depiction of the Falcresti navy women, of the scheming Cryptarchs or the teeming world of the Oriati Mbo. Don't deny yourself, get it now.

And I might be able to help with that... due to the generosity of Tor and the fact that I found a bookshop that already had The Monster on sale, I have a spare copy. So I am declaring this GIVEWAY season.

Share this review on Twitter (I'm old-fashioned, I don't have other social media) and tag me @bluebookballoon (yes, @ me!) and on Sunday 22 September at 6pm I'll pick someone at random to get the spare copy. (UK and Ireland only I'm afraid).

For more about The Monster and to buy the book, see the publisher's website here.