Today I'm joining the blogtour for Dark Pines by Will Dean. I'm grateful to the publisher for an advance copy of this book and for inviting me to take part.

I'm in the bullseye of a fucking murder forest and there are no lights on anywhere.

Dark Pines is a tensely compulsive thriller set in the gloom of a Swedish forest as the autumn shadows gather.

Tuva Moodyson returned from her life as a rising journalist in London - and from the weekends lost to drink - to be near her mother, who's terminally ill. Even though Moodyson hates the wilds and the forests and just wants bright lights, shops, restaurants and roads. But in the place she sneeringly calls Toytown, everyone's a hunter and the dark woods can't be ignored.

When, however, hunters begin to turn up dead in the woods, eyes gouged out, this also means everyone's a target. Suppressing her distrust of the outdoors and grabbing the chance to make her name through a career-defining story, Moodyson throws herself into the case, riling both natives (why can't she just write nice things about their town?) and the police. She also, however, begins to get close to the suspects in the remote hamlet where the bodies keep turning up.

Two sisters who make a living carving grotesque troll dolls for collectors - which they furnish with their own hair.

A taxi driver who seems to take a reciprocal interest in her.

Hannes and Frida who have, we are told "a good economy" (a phrase that recurs thought this book) and are well connected in the town. But Hannes is leader of the local hunters. Might he know more than he lets on about what is happening?

I was impressed by how Dean built tension, particularly through Moodyson's repeated excursions, alone, into Mossen village and its surrounding woods. The woods themselves seem like nothing more than a playground, an arena, for the strutting menfolk of the district who just seem obsessed with shooting things (and their right to do so). As the town slides into ruin about them - we are told of plenty of closed shops and failed businesses - they can only complain about a hunting ban imposed due to the murders. So it takes some considerable courage for a lone woman - especially one already resented and who actively fears the wilds - to go into those woods in pursuit of a story.

Moodyson is though a resourceful protagonist, who won't take "no" for an answer. Dean hints at some darkness in the past - not only her mother's illness and her father's death, but something in those London days suggests a shadow on her life. In addition, she has hearing loss and depends on hearing aids. Dean integrates the details of maintaining these - battery replacements, keeping them dry, problems with feedback and picking up background noise - into his story, showing her resentment at being patronised or at the ignorance of some. He also shows how helpful the aids are to Tuva, as when she wants to get her head down and do some work.

It's skilfully put together, not least in the way that the speech is made just "different" enough for the English to appear slightly foreign - as it might if it had been translated - without that obscuring the story. Dean also uses food to suggest contrasts between his characters: Tuva's hastily snatched McDonalds from the drive-through, her Thai friend Tammy's delicious street food served from her van, and the delicious sounding, but perhaps overreach, traditional Swedish food served up to Tuva in some of the homes she visits.

I felt there were a couple of loose ends - some threatening incidents that are explained but not fully - but this is an elegant and tautly written story, with a great sense of place, a likeable protagonist and a thrilling climax. I hope we hear a lot more of Tuva Moodyson in future.

For more info on the book see the publisher's page here.

You can buy Dark Pines from your local independent bookshop, including via Hive, or here, or here. 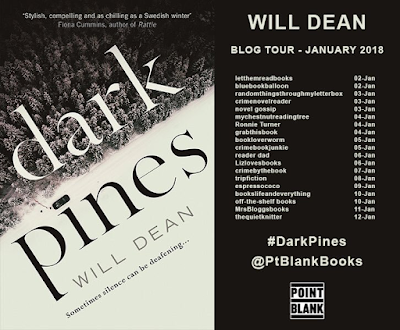