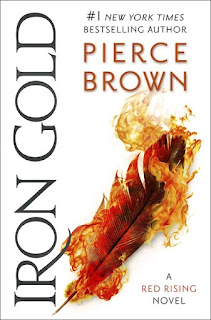 I'm SO grateful to Hodder for an advance proof of this book.

If you have been reading my reviews for a while (oh, who am I kidding...) you'll know that I simply adored Pierce Brown's Red Rising trilogy (Red Rising, Golden Son, Morning Star) which describe the career of Darrow (The Reaper), a downtrodden slave from the mines of Mars who joins the rebellion and helps to overthrow the rule of the hateful, oppressive Golds.

The earlier trilogy is notable for its visceral, brutal descriptions of battle; for the tension in Darrow, who is originally set on vengeance but is also more than half in love with the life he could have among the Golds (whose society he infiltrates in order to destroy); for its depiction of Darrow's dark side (he is, not to mince words, a war criminal) and for numerous betrayals, reversals of fortune and a mounting body count that sees many beloved characters murdered, assassinated or simply killed on the battlefields of Mars, Venus and Luna.

It is a magnificent achievement, ending only when the Society of the Golds was overthrown and a new world could arise. Iron Gold picks up the story ten years later, and I was at first nervous that a continuation could only be an anticlimax.

And, yes, this is in many ways a less romantic tale, infused with the compromises and failures of any demokratic* society seeking to replace a tyranny. (The copy I've been given contains a Howler Directive, forbidding any disclosure of plot details. I don't want the agents of the Republic to hunt me down, so I won't be more specific about these.) Darrow is haunted by what he's done, and hamstrung by the messy politics of a new Republic. Shadows of Julius Ceasar here, perhaps, as a military strongman clashes with the civilian order he has sworn to uphold - heightened by the fact that Darrow established that civilian order.

But "less romantic" doesn't mean "less readable". The heady stuff of rebellion, of "breaking the chains" may be absent but in its place is a more sober, perhaps more grown up, vibe. The story is of a whole with those earlier books. This is the same Darrow with the same drives and, as before, we feel for him, for his dilemmas, his shortcomings. More, knowing how Brown puts his characters - and Darrow especially - through the wringer, we fear for him: for what may become of him and for what he may become.

It's the same potent mix that Brown has served up before, yet still fresh and with a whole new cast of characters whose stories run parallel with Darrow's. An embittered ex soldier on Luna. A pair of exiled nobles in the Rim of the Solar system, caught up in politics of the exotic Golds who live out there. A Red woman, freed from the mines of Mars only to face new perils. All of these narratives are in first person, as is Darrow's, creating a very demokratic (as it were) picture of the new world Darrow has made rather than one focussed on a single viewpoint. And they allow Brown to experiment with slightly different styles: for example, the ex soldier inhabits a noirish world, popping pills to kill his empathy as he walks a narrow line between time bosses and his former comrades.

In short, my fears were proved wrong. Brown has avoided writing a mere potboiler, an equivalent of the Star Wars prequel trilogy, by widening his scope to address new issues, new complexities, and the torments of new characters. And all without jeopardising the raw power of the original trilogy, the feeling of almost playful violence, the sense of the Heroic (in a Beowulf or Homeric style) which infuses Brown's work at its best. It's that mode which shows us just how compelling the Gold myth is to Darrow and of course to the Golds themselves. Amidst the chaos and suffering of "democraky" who wouldn't yearn for order, for strength, for freedom from having to take decisions? I don't think I've read another recent author who shows us the insidious nature of authoritarianism - and the lessons are if anything more sharp here than in the first three books. I won't make facile comparisons with the current political situation but this does also give the book a sense of urgency, of relevance. (And indeed a couple of times Darrow's Howlers explicitly refer to the Society forces as "fascists").

In short: if you loved Red Rising/ Golden Sun/ Morning Star then Iron Gold is just as good, and benefits from a bit more philosophical and political oomph. If you haven't read those books yet, I'd strongly suggest you read them first since while this book is relatively self-contained, reading it first will spoil details of the plots of the others which develop in a nicely layered way and are worth discovering little by little. When you've done that you ought to read Iron Gold immediately though.

*The spelling Brown uses throughout, embodying the sneering Gold view that they are made to rule and that a polity which consults the lower Colours is a thing to be crushed.
Email ThisBlogThis!Share to TwitterShare to FacebookShare to Pinterest
Labels: 2018, Break the Chains, Pierce Brown, Politics, Red Rising, revolution, SF