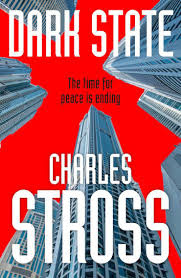 I'm grateful to the publisher for an advance copy of Dark State.

I always look forward to Stross's books, and I've been following his stories of world walkers since the start of the Merchant Princes sequence (in its original, six volume, form). So this is the 8th book in that series I have read, and I'm glad to be able to say that Stross is successfully keeping the books fresh, while engaging with events whose seeds were sown right back at the start.

He's done this by successively widening the scope. We began with one woman, Miriam Beckstein (now Burgeson) who originates in what looked then like "our" timeline and her discovery of her place in the relatively parochial, parallel timeline kingdom called the Gruinmarkt as part of its "world-walking" Clan. Over the original series the story broadened from fantasy-like beginnings to a technothrillery narrative which took in nuclear terrorism, drug dealing and ultimately revolution (in a third, steampunkish timeline).

Empire Games, the first part of this new trilogy, went further, into the world of superpower rivalries (both within and between timelines), revolutionary politics, and counter-espionage. Dark State develops that, while also bringing to the fore the possibility of conflict with a scarily advanced civilisation from yet another timeline - one which would make events so far look like neighbours arguing over an unruly hedge. That may come in book three, or be the focus of a future trilogy - let's wait and see.

So much for context. What is Dark State like? As with the previous volumes, it's an assured, well-written story about competent people playing for high stakes. Rita Douglas, the daughter Miriam put up for adoption and who was brought up by Franz and Emily Douglas, is proving a capable agent for Homeland Security although the clash between the personal and the political is about to hit her hard. She has an additional resource to draw on in being part, via her adoptive parents, of the Wolf Orchestra, an East German spy ring stranded after the end of the Cold War. In Empire Games Kurt put the Orchestra on standby and now it's tuning up to play a final symphony.

Rita's counterparts in the New American Commonwealth (across several factions) and the regime in exile of the pseudo British kings are equally effective, making this book a game of chess played between very high ranking players. Almost everything is on the board from the start (Stross does reserve a few pieces) and the way the games goes very much reflects the character of the protagonists. By that I mean that while one's first impression is that Stross is doing a lot of telling not showing, that isn't in fact the case - what these people do is who they are, so we are learning about how a well imagined and diverse set of characters see their world(s).

For example, we have Elizabeth Hanover, a doubly exiled princess brought up among emigres and dreamers in Europe, apparently a minor piece on the board but very much taking her fate in her own hands. By the end of this book we have a clear picture of her and Stross is obviously reserving a big part for her in Book 3. If Merchant Princes was in part about deconstructing the "exiled nobility" trope in fantasy, Dark State takes that to a whole new level since Elizabeth is, literally, exiled nobility - in fact royalty - but won't be defined by that. In what may be a two fingered gesture to SFF conservatives, Stross explicitly makes Elizabeth and Rita women of colour (and yes, the context of the story totally allows for that).

Given Dark State's focus on espionage, tradecraft and general chicanery, it's not surprising that a lot of space is dedicated to surveillance (and how to mitigate it). All of the protagonists are playing this game on different levels to such a degree that tiny advantages or disadvantages make a big difference in the outcomes. It's clever, engaging, well thought through and fun to read (as well as potentially useful - "every phone was, by definition, a wireless bugging device", "orient, observe, and decide before you act"). I do have a slight reservation which is that we get something close to a stalemate: it all rather cancels out and the resulting plot turns in a number of key places on essentially chance developments. But maybe that's just true to life! ("The race is not to the swift, nor the battle to the strong, but time and chance happeneth to all...")

There's a wider point beyond this. Dark State is a world - a universe - a set of universes - which make political points about such matters as democracy, economic development, and the surveillance society. Stress has thought long and hard about this stuff (as readers of his blog will be aware) and offers plausible, and often troubling, conclusions. For example, the New American Commonwealth is about to lose its First Man (its equivalent of its President, although it's more of a "guardian of the revolution" role). Will a newly established democracy manage this transition or will factional rivalry turn into civil war?

The author gives us few outright heroes or villains: I would have said "no" but there is Rita's boss Col Smith who seems to have been responsible for the nuking of the Gruinmarkt in Merchant Princes. We may sympathise with the survivors of the Clan because they're Miriam's people, but they are, as one sceptical figure here notes, an aristocratic-minded sect within an egalitarian society (in the same way as they formed a state-within-a-state in the Gruinmarkt). At the beginning of the book Stross illustrates, using the Wolf Orchestra as an example, how such a sect can survive and keep itself safe within a wider society. He's essentially set up a situation where an alternate timeline (the New American Commonwealth) introduced as an apparent refuge for the world-walkers when their own was nuked by the US becomes itself an active and interesting project which the reader will want to see survive, Clan or no. Given Col Smith's record that seems an iffy proposition and if I were one of the Clan's opponents in the Commonwealth, I'd be pointing out that the hostility from the US is primarily directed at the Clan and that they might be becoming dangerous guests...

Individuals may be in shades of grey but there is however a clear denunciation of the extent to which, in this timeline, Ubiquitously Surveilled America has descended into an authoritarian state: the Fourth Amendment is a dead letter, one character here is spirited away into "night and mist" (and may face "destructive debriefing and recycling), we're told that "everything is terrorism these days: downloading, uploading, jaywalking with intent to cause fear", a sinister sounding "Defense of Marriage Act" is in force. At one point, visiting a club with Angie,  Rita welcomes "the comfort of public affirmation, of having a lover whose hand she could openly hold (at least in safe spaces like this), of having someone she could get sweaty on the dance floor with and who would take her home afterwards..." It's an excellent flash of personal experience and anguish to juxtapose against the grand themes of politics and espionage, even if we suspect Angie may find herself used by the spooks as leverage to control Rita.

The US Administration here is also riddled with conspiracy theorists, adherents of fringe religions and so forth, so much so that Rita is tasked, alongside obtaining valuable intelligence about the Commonwealth, with verifying a whole range of bizarre beliefs and theories the need to pander to which hinder Col Smith's operation at times (contrary to popular belief, fascism is not "efficient", and Stross highlights this in passing).

Some of this is genuinely funny, and as ever, Stross also makes the reader smile knowingly at some of his references: in this world, Ruritania is apparently a real country (one can travel to Strelsau but Elizabeth would rather not), there's mention of the "game of Empires" which must go one better than one of thrones, a Slaveowners' Treasonous Rebellion which was NOT THE SAME AT ALL as the US Civil War (even if it it is an excellent description...), there's a warning against curiosity because it is "felicidal" (think about it!), we have Brilliant unironically echoing Bogart when she says "Play it again... Play it Sam". More soberingly, there's a description in the historical Appendix of what happened after the French invasion of Britain which placed customs barriers on the canal system, "breaking up what had hitherto been the largest free trade zone in Europe" and causing economic disaster. (Hmmm...)

To sum up: this is an intelligent, sharp SF-espionage-thriller which nails some dark tendencies in present day politics and use of tech while building up an even more nightmarish threat in the depths of the timelines. Strongly recommended.